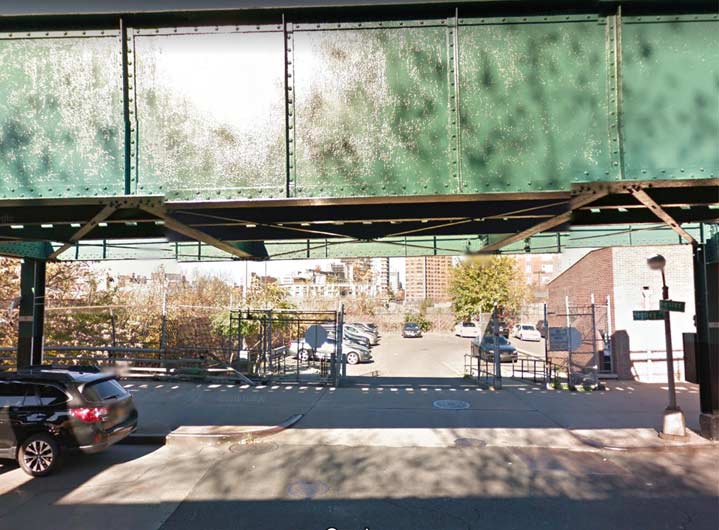 Hegney Place is one of those “ghost streets” that has never quite been expunged. The Department of Transportation chooses to mark it at both Westchester Avenue and at East 157th Street in Morrisania, though both of these “stubs” are driveways to private parking lots. The street was once mapped to run alongside the former Port Morris Branch of the New York and Harlem Railroad from Westchester Avenue north to East 158th Street near St. Ann’s avenue, but most of its former path is now an athletic field, the Merrill Lynch Field of Dreams, dedicated in 2001. The old railroad, which was formerly in an open cut, has been decked over. There are vague hopes that the old spur could become the Bronx’s answer to the High Line (Low Line if you will) but those are glimmering at best.

When first laid out in the mid-1800s Hegney Place bordered the now-vanished Bensonia Cemetery, a small cemetery founded by the Benson family. It became known as German Place for the prominent neighborhood nationality, When the USA entered World War I, primarily opposing Germany, it was renamed for the first Bronx soldier killed in France, Arthur Vincent Hegney.

There is a future contract on the NYC DOT website for the filling in of five bridges on the abandoned CSX rail line,estimated cost of 11 to 20 million dollars.

At the end of Rae Street, which at one time intersected with German/Hegney Place, there is a street sign for Hegney Place, as seen on Google Maps. There clearly is a stretch of overgrown land marking this former street.

Hegney Place is named for my great uncle Arthur V. Hegney. KIA in WW1 France with the Fighting Irish of the 69th Regiment – https://www.findagrave.com/memorial/161107598/arthur-v.-hegney