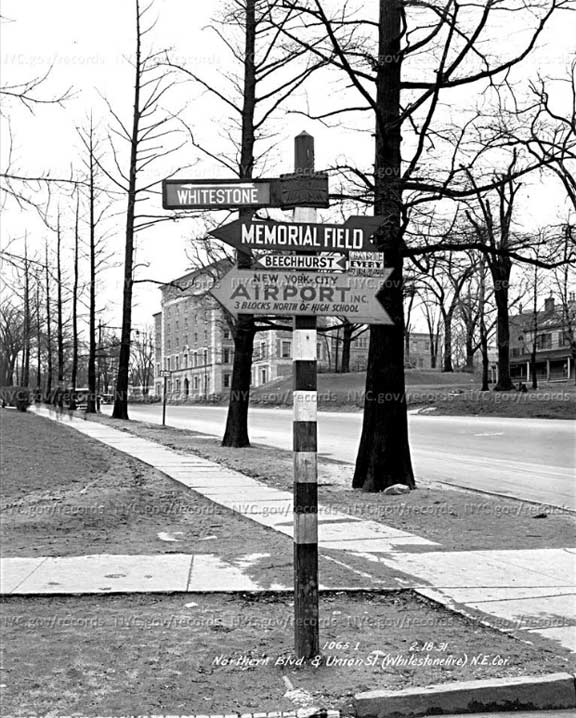 From the NYC Municipal Archives (which has helpfully watermarked the photo by way of encouragement for you to buy the photo at their website without such obstruction) is this look at one of Queens’ striped directional poles that were so prevalent in the early 20th Century. We are at the NE corner of Northern Boulevard looking east. Out of the photo to the left is the massive Flushing High School. Since 1931, Northern Boulevard has been widened into a 6-lane behemoth at this point, and few of the private homes of the type you see at the right have survived. One surviving structure is the YMCA Building in the background right. (I keep saying I’ll finally take swimming lessons there, but I’d need to buy prescription goggles first).

Of chief interest for me is the post itself, as it points to several items that would probably not get highlighted today. First and foremost the neighborhood of Whitestone, attainable by driving up Union Street (former name Whitestone Avenue) which becomes Willets Point Boulevard, a major diagonal artery. 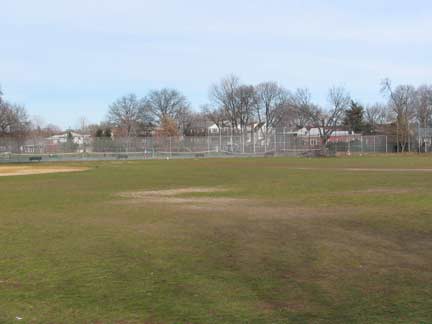 The Memorial Field of Flushing, bordered by Bayside Avenue, 25th Avenue, 149th Street and a right of way west of 150th Street, differs from Murray Hill’s other major park, Bowne Park, with its playing fields home to local high school teams. Older maps from the early 20th Century show it as Flushing Driving Park; perhaps it was a recreational carriage run.

Beechhurst is the eastern end of Whitestone, wedged between the Cross Island Parkway to its south and Little bay and the Throg(g)s Neck Bridge to its east. It was a prominent real estate development of the early 20th Century.

The “New York City Airport” was not LaGuardia (its predecessor, the North Beach Airport, opened in 1932) but instead, Flushing Airport, used mostly for cargo and freight flights. Flushing Airport has been mostly abandoned for over 50 years, though some sections along its edges have been redeveloped. Its ground is quite swampy and local politicians and developers can never agree on land use for this relatively vast area.

None of these striped directional posts are in existence today, even in museums; perhaps some private collectors have a few of them.

I’m intrigued by the airport sign saying it’s “3 Blocks North of High School”. By my quick Google map measurement it’s at least 3,500 feet between the closest point of the former airport and the school (and certainly not via Union Street). And I can’t think of any other High Schools in the area. Maybe the Airport (note it says “Airport Inc”) had some kind of business office much closer by?

Was also amused to see Memorial Field as being located in Murray Hill by your reckoning. Perhaps it is (it does extend pretty far south) – but as a former student at JHS 185 (Bleeker JHS) and frequent park visitor, I never really thought about it that way…..

Great photo. How beautiful and still thoroughly suburban that corner of Flushing looked like back in 1931. I agree totally with Jerry. I too attended Bleeker Jr High School and never would have considered Memorial Field to be a part of Murray Hill. If anything the area would have been called North Flushing and today is regarded as a part of Linden Hill, or in some real estate circles is part of what they call “Bowne Park”, which is a neighborhood designation that was created by real estate marketing interests, for anything lying north of Bayside Avenue and south of the Cross Island Parkway, which includes the southern part of Whitestone.

Federal Aviation Administration rules require that each end of an abandoned airport runway be marked with a huge “X” to warn pilots not to attempt landing. Flushing Airport’s runway is so deteriorated that it’s barely visible and the X marking is no longer required.

Here is a detailed writeup on their airport, replete with remarks from former users and many photos.

The watermarks bother me as we residents of the City of New York already own those photos.

The picture of the YMCA reminds me that I took swimming lessons there back around 1955. I still remember it because a requirement of participation at this YMCA was that you took the swim lessons in the nude. We were all about 8 years old. YMCA had this policy because they wanted all boys to attend even if one could not afford a swim suit. Sorta made every one equal. It was during these lessons that I learned that black-skinned people were black all over and not only on their faces and hands. Those were the days of pure innocence.