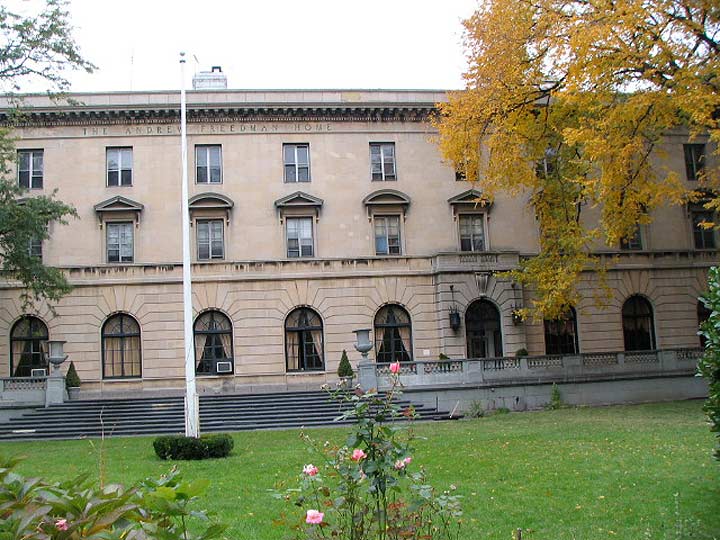 Though the Grand Concourse in the Bronx is filled, top to bottom, with Art Deco and Moderne masterpieces, one of its most intriguing buildings is sedately set back from the street and hidden in summer by thick foliage. The Andrew Freedman Home for Older Adults, at East 166th Street, was built in 1924 with an endowment in the will of Freedman (1860-1915), an early owner of the New York Giants baseball team. But Freedman’s stipulations were specific: it was not to be your usual old-age home, but one for indigent adults who had previously been rich and lost their fortunes! Freedman had nearly lost his own fortune in a 1907 stock market panic and a fear of destitution apparently haunted him.

Residents lived in the accustomed luxury that their reversals of fortune had denied them: a kitchen with a restaurant-quality menu, spacious quarters, club rooms, and a 59-member staff. By the 1970s, there were apparently very few former millionaires left in the Bronx, the home changed its policy, and by the early 1990s it became a regular old folks’ home and took applications by anyone over 55, which means that by now your webmaster could apply.

However, the Freedman is no longer a Home. For several years now it has doubled as a daycare center, bed and breakfast, artists’ residences and art gallery. In 2012 it sponsored the acclaimed This Side of Paradise, an exhibit featuring photographs and video installations describing the Freedman’s history, with participation by the likes of famed Village Voice photographer Sylvia Plachy. New exhibits appear regularly; see the above link.

The Freedman’s gardens, terraces and arched balconies speak of a time when you were better having had money and lost, than never to have had it at all.

used recently in the shooting of the Netflix show “The Get Down” about the 1970’s Hip-Hop development years in the Bronx. Good show.