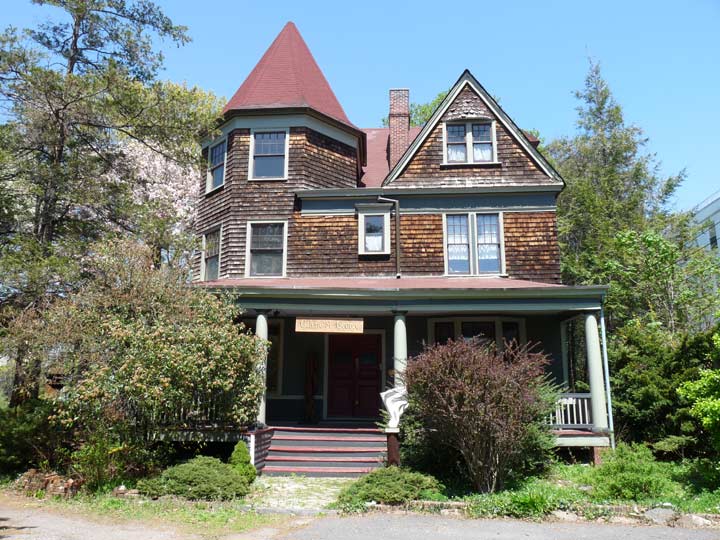 St. George, Staten Island  was named not for the Roman noble, later martyred, who in fable slew a dragon, but rather for a land baron named George Law, who had acquired Staten Island waterfront rights at bargain prices. He agreed to relinquish some of the rights for a ferry terminal — provided it be named for him! Prominent residents of St. George have been New York State Governor Daniel Tompkins and NYC subways bankroller August Belmont.

Most of its famed and landmarked houses are scattered along St. Mark’s Place, atop a cliff that boasts amazing views of Upper NY Bay and the ever-changing Shining City beyond it. However you will also find several =interesting houses a bit further inland.

Phelps Place is a tiny cul-de-sac on Hamilton Avenue a little east of its junction with Westervelt Avenue. The mansion at its rear, 11 Phelps Place, designed by architect Douglas Smyth in 1890, is notable not only as a premier example of Shingle Style architecture, but it was also part of the estate of millionaire banker Anson Phelps Stokes I. His son, Isaac Newton Phelps Stokes, became perhaps the borough of Manhattan’s greatest historian. Stokes’ six-volume Iconography of Manattan, 1498-1909, published between 1915 and 1928, presents hundreds of thoroughly annotated maps and prints that delineate Manhattan’s progress from before the Dutch colonial era to the 20th Century. Your webmaster would love to have this seminal history, but even a reprinted version from 1998 runs for $750!

11 Phelps is now home to the Galerie St. George, where a ForgottenTour was welcomed warmly a few years ago.

The Iconography is online. About 500MB total in PDF. Free. Not as sharp as the real thing, but not too bad.

I’ll have to look that up. My associates Greater Astoria Historical Society have a reprint copy

Here is the link/address to that online version of the Iconography of Manhattan:
https://exhibitions.cul.columbia.edu/exhibits/show/stokes
Truly wonderful!

What about the elephant in the room? Meaning ok while it’s a fun bit of hubris to require the terminal to be named after George how did it get the Saint moniker? While I would guess they went with the dragon slayer theme, I am secretly hoping they really thought it Saintly of George Law to donate the land and slay the ferry transportation dilemma.

As I understand it, you’re very close.
I had heard that if he donated the land, it would be called (I’m not sure if it was in jest or not) St. George in his honor.