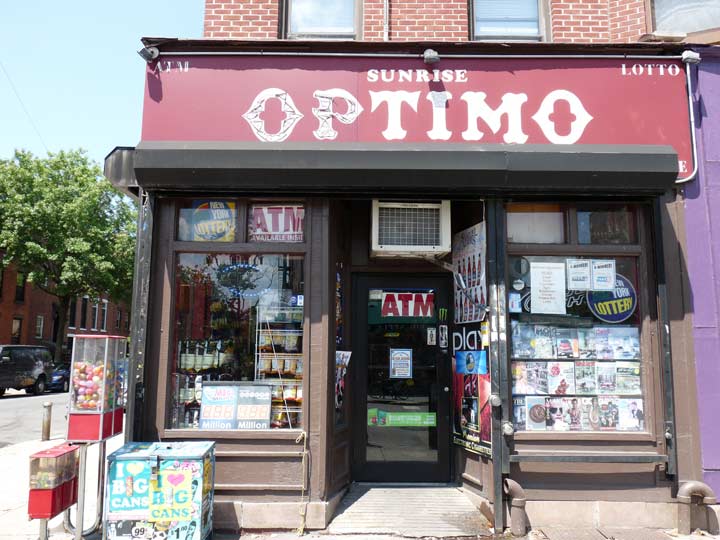 I’m not a smoker and I’m glad I never got started with it in any form, cigarettes, cigars, tobacco, marijuana, any of it. That’s not to say I’m not attracted to the iconography associated with the business, especially in regards to NYC signage. FNY has previously covered “privilege” signs found on newspaper and grocery stores around town. Most often sponsored by Coca Cola, signboard and lettering, most often in green and gold but sometimes in other colors, to proprietors who would also display prominent signage with the distinctive Coca Cola logo.

I haven’t touched on privilege signs sponsored  by Optimo Cigars, which like the Coca Cola signs were once more numerous but have persisted in some quarters. I presume the arrangement was the same, but Optimo apparently insisted on much larger coverage on their sponsored signs, since the Optimo name, in distinctive lettering, totally dominates the ones I have seen.

Optimo dates to 1898 and was founded by Spanish immigrant Antonio Santaella (1863-1948) in Tampa, Florida; he had first moved to Havana, Cuba in the 1870s and began his cigar business there. After Optimo became the cigar of choice of Babe Ruth, Optimo’s popularity took off, and ‘privilege’ signs like this one at Court and Degraw Streets in Cobble Hill, Brooklyn, sponsored by the cigar company, began to proliferate at stores selling the brand.

6 Sq Ft has much more on similar ‘privilege signs’ around town, many of which are still surviving.

Woody Allen always takes a shot of the cigar sign at 4th St. and 7th Ave. in his NY movies.

Unless they were later add-ons, the ATM and Lotto logos on the sign mean that it can’t be particularly old.

I used to smoke Optimos year ago..dark wrapper…till one day I decided I had enough of the holes in my knit shirts from burning ash embers….Glad I stopped anyways but I did enjoy one after a great meal…

I wonder why the first “O” and the “P” are ornamented. Or is it something underneath showing through? Or a trick of the light and shadow? Or just weathered differently?

That isn’t ornamentation. It’s graffiti Open the image in a new tab and zoom in in the area.

OPTIMO signs!
They still exist!
That lettering style should be declared a national landmark and be in the Smithsonian.
The gritty New York paintings of Reginald Marsh made them famous to millions.

He compared oil to the tobacco industry, and said both are “knowingly killing people all over the world.” as he puffed on a cigar while driving his hummer. 5