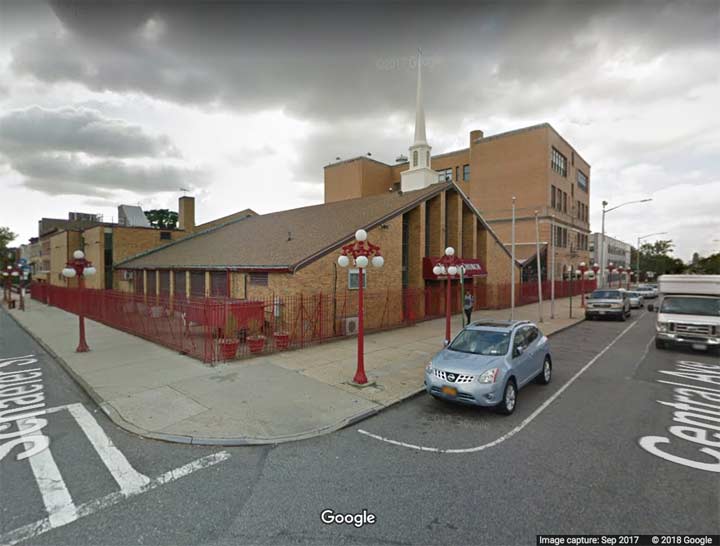 I was participating in a NYC trivia quiz sponsored by NYC historians The Bowery Boys (Greg Young and Tom Meyers, whose website, podcasts and book, Adventures In Old New York, are highly recommended). One of the questions was, which among these is not a real Brooklyn street? Among the choices were Cranberry Street, Dank Court, Sheepshead Bay Road, Force Tube Avenue, Hallelujah Way, Vitamin Boulevard.

I knew the first four streets right off the bat so it was between the last two. Figuring that “boulevards” were mostly in Queens and there were a lot of churches in Brooklyn, we guessed Hallelujah Way. We were right and ultimately, our team on the game.

OK, so where is Hallelujah Way? It’s a subname of Schaefer Street between Evergreen and Central Avenues in Bushwick. The corner of Schaefer and Central, and several buildings on Schaefer and Covert, are given over to buildings belonging to the Pilgrim Church in Bushwick, part of an assembly of Pilgrim Baptist Churches in Brooklyn, Manhattan and the Bronx that were organized in the 1990s by Bishop Roy Brown, Senior. The church buildings on both Schaefer and Covert are highlighted by handsome sidewalk lampposts boasting a bright red paint job.

As a rule, online information about church buildings and their architecture is sketchy (you’re supposed to care about what goes on inside, rather than care about the architectural styles, is the thinking) so that’s about all I know. I do not know when the moniker Hallelujah Way was first applied, but neighboring Covert Street is also subnamed “Joy Way.”

“I knew the first four streets right off the bat so it was between the last two. Figuring that “boulevards” were mostly in Queens and there were a lot of churches in Brooklyn, we guessed Hallelujah Way” – shouldn’t that be Vitamin Boulevard as not being in Brooklyn?

Many of the buildings on Hallelujah Way were initially by 14 Holy Martyrs RC Church and elementary school, an old German parish that was merged with a neighboring parish in the early 1970’s. The interior of the church building appearing in the picture, which replaced an old wooden church, still retains many of the murals and reliefs that graced the Catholic Church.

Incidentally, one of Pilgrim Baptist’s main sanctuaries is housed in the former Loews Gates movie house, situated near Gates’ intersection with Broadway. This is a very large and thriving institution.

This was my dad’s parish & school back in the 40s & 50s, Fourteen Holy Martyrs. The parish was merged with St Martin of Tours in 1976 and the property sold to the Pilgrim Baptist Church, who have done a wonderful job of keeping the buildings looking good. More info can be found at https://www.brownstoner.com/architecture/building-of-the-day-144-covert-street/

Awesome! I remember it as well. Did my communion there and saw the ceremony when it was decommissioned by the Archdiocese attended by Cardinal O’Connor.