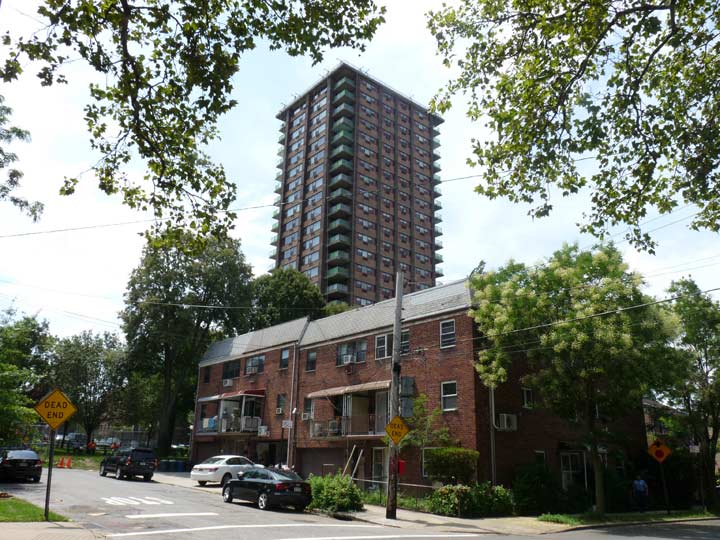 When I first moved to Flushing in 1993 I marveled at a pair of very high towers visible looking toward the southern horizon from 43rd Avenue and 162nd Street. They are part of the Electchester complex, a housing project originally built for electrical union workers in the 1940s.

Some call the region east of Queens College from Kissena Park south to 73rd Avenue “southern Flushing,’ but I think that grants Flushing too much territory — so I’ll go along with what some lexicographers say it is, Pomonok, a name derived from the Algonquin Indian name for Long Island. Streets and houses were laid out on the former Pomonok Country Club. Its golf course was built by members of the Flushing Athletic Club, which began in 1886 as one of the first golf clubs on Long Island. They leased 83 acres of land along Northern Boulevard in Flushing. When their lease was set to expire in 1919, some members favored finding a new, larger site that had room for an 18-hole course. Others favored renewing the lease at the original site and gradually expanding their 9-hole course. The membership ended up splitting, with the bolting members forming the Pomonok Country Club along Kissena Boulevard in 1921. [The Flushing Athletic Club did eventually expand their course to 18 holes, but the club didn’t make it past the 1920’s.] The country club was famous for having female caddies and for hosting the 1939 PGA Tournament during the World’s Fair.

The club was in existence until 1949. Thereafter, part of it became the Electchester Homes, middle-income housing built by Harry Van Arsdale, Jr. president of Local 3 of the International Brotherhood of Electrical Workers. Another part was managed by the City Housing Authority who built the Pomonok Houses, among other developments. Electchester was the latest in a series of hosuing projects built for specific categories of unionized workers, joining the Amalgamated Houses, Bronx, and Seward Park Houses, Manhattan (garment workers); Concourse Village, Bronx (meat cutters); Big Six towers, Woodside (printers and lithographers).

Electchester was constructed in stages from the late 1940s to late 1960s, and the buildings in the project were named prosaically beginning with the First Houses and going up to the Fifth Houses, which are the two towers on 160th and 162nd Streets. Electchester has an unusual street layout with 160th, 161st and 162nd forming a rounded Y-shaped pattern between 65th Avenue and Jewel Avenue/Harry Van Arsdale, Jr. Avenue. The latter street is marked by signs that cram the two names onto the same sign, making it rather hard to read. Jewel Avenue is the only survivor of Forest Hills’ former alphabetically named street pattern; it was extended across Flushing Meadows in the early 20th Century and the name Jewel Avenue was slapped onto a previously existing farm road. Oddly enough, Harry Van Arsdale Jr. changes his affiliation from Jewel Avenue to 69th Road in Forest Hills.

As far as the extent of Flushing, if one goes by the PO definition, the southern border is on Union Turnpike. Cross Union Turnpike and you’re kin Jamaica.

All true, yes. However, the post office designation “Flushing, New York” includes all post offices with the 113xx designations, which means virtually everything in the northern half of Queens from Woodside east to the Nassau County boundary. Thus, a letter sent today to “Flushing, New York 11367” would still be delivered to any address in the Kew Gardens Hills zip code. The reason for this goes back to at least the 19th century when Flushing was a separate town under NY State law, and the US Post Office recognized those boundaries. Similarly, most post offices in South Queens have the “114xx” designation and are part of the Jamaica post office, also a vestige of the 19th century when Jamaica was a separate town. Queens residents’ habits of using their neighborhood designations to describe where they live is partly due to the historic post office designations, despite the 1898 consolidation with New York City.

When I lived right on the Rego Park/Elmhurst line for 32 years, it began with just the postal code of “73” getting your mail delivered properly. Not that many years later, the “113” became the prefix for that newly-arrived zip code. This was something brand new. Years later, the last 4 digits post hyphen were a bit suspect at first though they are supposed to designate the postal carrier. All I know is that each system has worked but the oldest ones worked best.

From a Kew Gardens hills persorctive, when we want packages or mail returned to us, we have to put flushing or god only knows if u will get your mail. I’ve managed to not get several packages due to being politically correct and winding up with lost mail. Just putting flushing seems to fix that for the most part.

In 1968, when I was 12, there was a race riot at Pomonok Village. My parents had just put down a binder for a gorgeous three-story solid stone home about a mile away, but my mother’s frightened friends strongly persuaded her to retract it. Needless to say, there was never another racial or other type of noteworthy incident there (aside from a recent stabbing), and this decision decidedly altered my life in several major ways. Ultimately I would have inherited a beautiful property which I’d have possibly never left. However, I don’t think it’s still in existence as Fedders’ homes keep encroaching and replacing historic gems. I’m pretty sure this dwelling, with its Romeo and Juliet balcony along with a second one on another level, held a history worthy of landmarking. If memory serves me correctly, the surname of the departing family back then was Yabovnik. If anyone recalls the house, kindly reply. It was on or just off Utopia Pkwy. near Parsons or Union Tpke.

HI, I LIVE IN ELECTCHESTER NOW, SINCE 2008. MY WIFE & I LIVED IN KEW GARDENS UNTIL 2008, THEN MOVED TO ELECTCHESTER. SHE GREW UP HERE, SAME APARTMENT. CRAZY, HUH. RIGHT NOW, ITS NOT TOO BAD HERE, FOR A WHILE IT GOT BAD, WITH THE NEIGHBORS, BUT NOW PRETTY COOL. NEVER HAD COMPLAINTS ABOUT THE RENT, IT GOES UP, NOT TOO MUCH, WE HAVE A 2 BEDROOM APT. PRETTY BIG, I THINK WE WOULD PAY A LOT MORE FOR 2 BEDROOMS IN OTHER APTS. WOULD LIKE TO MOVE FROM HERE ONE DAY, STILL LOOKING, KIND OF HARD FINDING A PLACE IN A DECENT NEIGHBORHOOD. WOULD NOT RECOMMEND ANY ONE MOVING HERE, BECAUSE OF THE MANAGEMENT!!

Electchester should change it’s name to Potchester. It became a disgrace. The Residents are very nasty and low class. The Building became very dirty. I got tired of coming home and smelling pot. It is not a safe area for children. I am glad we moved to Florida.

I am glad you moved, too, sounds like you were really unhappy. Why share negative news? Enjoy Florida.

I was born in Elechester in 80s and moved to Suffolk county in Long Island where I have lived since the early 2000s. The rent out here is insane, especially since all the city people flocked to the island because of covid, the market is skyrocket. A little home in a less than desirable town that needs major renovations is $400,000 easy with enormous taxes. So frustrating. Studio rents are at a minimum $1500 and condos HOA fees are over $700 a month not including taxes, heat and electricity. Long story short, my father still works for the union and I am about to fill out an application to see what I can get in Elechester. It seems like I could get a bigger unit for cheaper prices than the island. I will still work on the island but Im thinking the travel will be worth it. I don’t know much about the neighborhood anymore but it doesn’t seem dangerous compared to other places. I’m looking forward to the “city” vibes since I’ve been in the country so long. I think it’ll be better opportunities to meet a more diverse population of people/ friends. The only negative comments I see here is about pot smell (def not a problem) and poor management (isn’t that everywhere?).

Electchester is a rare refuge of affordability in this city, well-kept lawns and playgrounds and a strong sense of civic activism among neighbors as most of them are Union members. I am proud to be living here.

Lived in Electchester for 20 years, raised two kids there. It is a wonderful neighborhood.