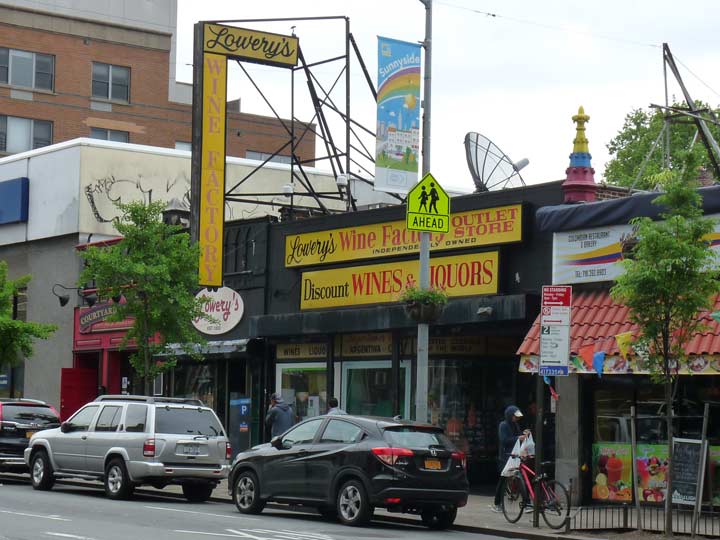 The casual visitor to Sunnyside might assume that Lowery’s Wine Factory on Queens Boulevard between 40th and 41st Street was named for the original owner. Never assume anything in Queens; it is named for the nearby elevated train station, 40th/Lowery Street. (There is also a Lowery Bar and Kitchen, a relatively new restaurant, on 43rd Avenue and 43rd Street a few blocks away.)

Many Queens elevated stations and subway stops preserve the stations’ former name. There have been various reasons for this over the decades. When these stations were built between 1915 and 1935, the Interborough and Independent Subway contractors strove to preserve the old names so that area oldtimers who were used to the old names would not be confused. Queens street numbering was conceived in the mid-1910s and not competed until late in the 1920s.

For the past few decades, though, the names have been retained for old times’ sake, purely as a reminder of the past. Indeed, when the MTA tried to remove them in the late 1990s, neighborhood residents lobbied to have them returned.

For a comprehensive subway street necrology FNY has you covered.

As someone who lives a block away, I have a couple things to add (though I feel like you might have covered this before):
*The sign says “Since 1933” which’s makes it one of the oldest liquor and wine shops in the nation- as that’s the year FDR repealed prohibition.
*The founder of Lowery’s, Lou Ladati, and was a civic leader (along with Edward Lynch, whose funeral home still survives down the boulevard). Those two men were founders of the sunnyside chamber of commerce.
*A park on the north side of the tracks is named in Lou Ladati’s honor.
*The shop is still family-owned and has just about everything you could want from low end to top shelf. By far the best mom and pop spirits store I have ever been to.

I couldn’t help but note the irony of Bliss commenting on Lowery; if only Rawson could join in and complete the triple!