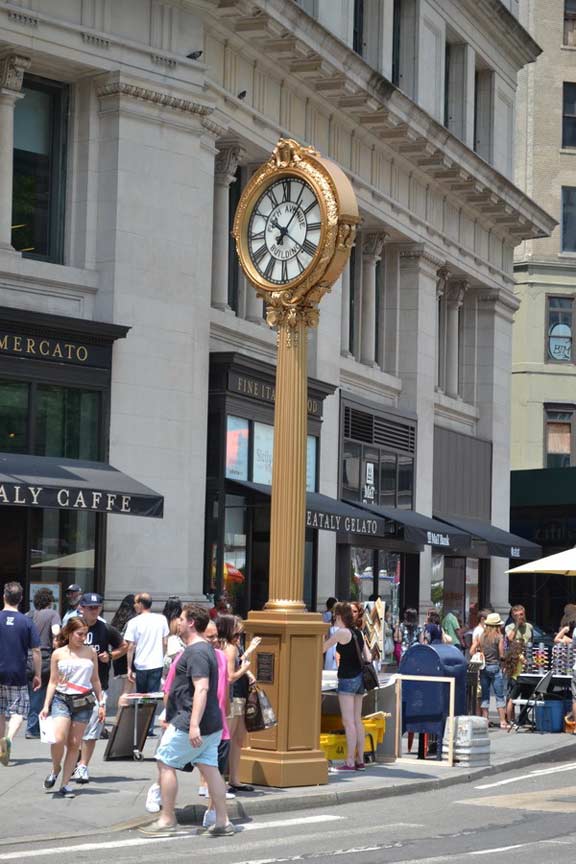 This gilded, ornate street clock is perhaps the most magnificent still existing in New York City. It was installed in 1909, at the same time 200 5th Avenue, in front of which it stands was built. Tiffany & Co. sponsored the restoration the clock in 2003 by the Electric Time Company.

From 2013-2014 I worked at 200 5th Avenue freelance for Tiffany & Co., whose offices moved here about a decade ago. Originally, 200 5th was called the Fifth Avenue Building (its elevators still were showing the FAB initials on their interiors before they were replaced after 2003). Through much of its history the building was home to the International Toy Center and since 2011 it has hosted the offices of  Hecla Iron Works of Greenpoint, Brooklyn. Named for an Icelandic volcano, the Hecla works built the clock, as well as many of the long-gone subway exit and entrance kiosks (the last of them disappeared in 1967).

When walking the halls at Tiffany, I noticed some of the steel columns bore the name “Carnegie.” Two 19th Century titans of industry coming together in the same building, decades apart.

In olden times this was a grand stagecoach stop to points west and wild.