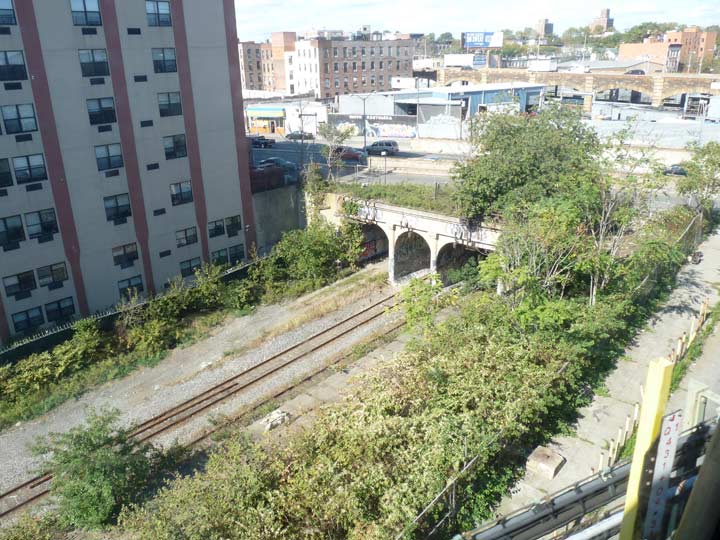 The Bay Ridge Branch of the Long Island Rail Road runs from the  Fresh Pond RR yards in Glendale generally southwest and west, ending at the waterfront of the Narrows in Bay Ridge. For much of its route it’s a one-track freight line. It has been discussed as the locale for a new crosstown subway line that would use the LIRR and Connecting RR tracks across the Hell Gate into the Bronx, but that’s a lot of rights-of-way to coordinate for a line that would never enter Manhattan, the hub around which NYC’s mass transit system revolves–hence, it’s a non-starter.

However this was once a passenger line until 1924. In the years since virtually all of the Bay Ridge’s legacy as a passenger route would be wiped out — except at East New York, where tangible traces remain. You can see it out the window traveling south on the elevated Canarsie Line (L train) just south of the Atlantic Avenue station. 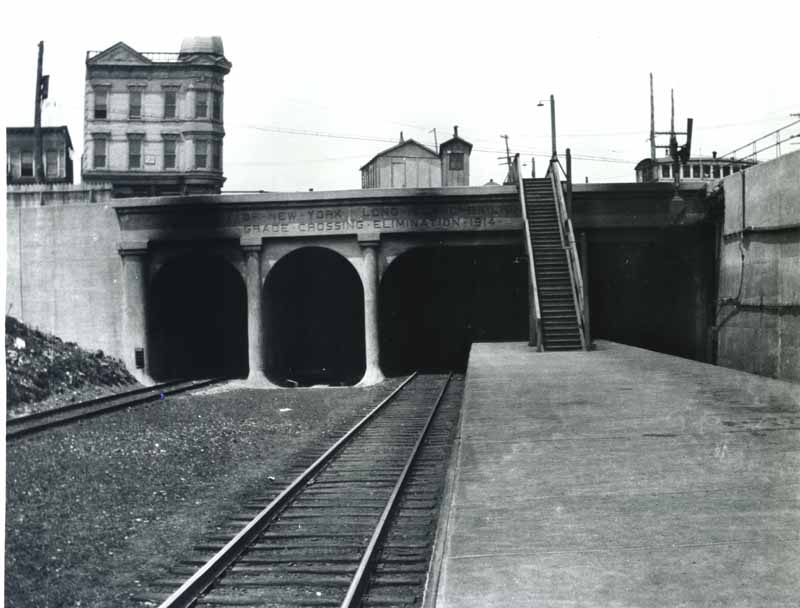 The only remaining platform from the old New York and Manhattan Beach, East New York was in passenger operation from 1877-1924, with this concrete center platform in use beginning in 1915. It was in use for between just 8 and 9 years before service was eliminated! Note the trolley (or is it a diner?) on Atlantic Avenue over the tunnel entrance.

The Bay Ridge travels in an open cut while the Canarsie Line is on an overhead el along Van Sinderen Avenue, which long ago was called Vesta Avenue, after a minor goddess in Roman mythology. Just south of the New Lots L train station, however, both lines parallel each other at grade and we can see a now-cutoff interchange track between the two. As recently as about 15-20 years ago this track connection could be used to transfer LIRR units onto BMT trackage. It was never used this way, however; new cars could be brought on to BMT tracks using this method. Nowadays the transfer is made in Fresh Pond Yards or Coney Island Yards via the Cross Harbor Railway.

In the distant past, however, LIRR trains could and did use BMT tracks: there was a flyover that connected the LIRR with el tracks along the el on Fulton Street in the vicinity of Cleveland Street, and LIRR units then used the Broadway Line across the Williamsburg Bridge to a terminal at Chambers Street, which also formerly served the Manhattan Bridge. LIRR service across the Williamsburg ended in 1913, and the Chrystie Street track realignment in 1967-68 ended Manhattan Bridge service to Chambers.

This would be part of the ‘Triboro Rx’ outer borough subway loop plan. It’s a very good plan, but as you allude to, it has it complications aside from funding. A shame it probably will never happen. I do have hopes the upcoming LGA Airtrain can be connected to Jamaica at some point and perhaps stations added, providing kind of a stealth outer boro loop service and getting more use out of the Airtrain system. Ah, we can dream I suppose.

Should note that these tracks are still in existence for freight service and go under the LIRR Atlantic Avenue route which still has an East New York Station.

The part about the LIRR connection to the elevated tracks along Fulton Street needs some minor corrections. The ramp was at Chestnut Street, and the service lasted until 1917. As noted in http://www.nycsubway.org, “The Chestnut Street incline saw continued service, and the LIRR electrified it on July 28th, 1906. A special adapter at the beginning of the ramp along the LIRR’s Atlantic Ave line enabled the third rail shoe of the LIRR cars to be moved to the “correct” position for traveling over the El. Service ran to Broadway Ferry until May 30th, 1909, when LIRR service was extended over the Williamsburg Bridge to the new “Manhattan Terminal” (today’s Essex Street). Service lasted until September 3rd, 1917, and the structure was not dismantled until 1942 (although parts were torn down in 1924).”

I spent many a summer day hanging out under the 19th Avenue overpass in Borough Park in the 60’s. We’d smoke, drink, throw rocks at the freight trains, and look out for hobos (the folks said they could do bad things to you). Brooklyn was fun to live in in those days!