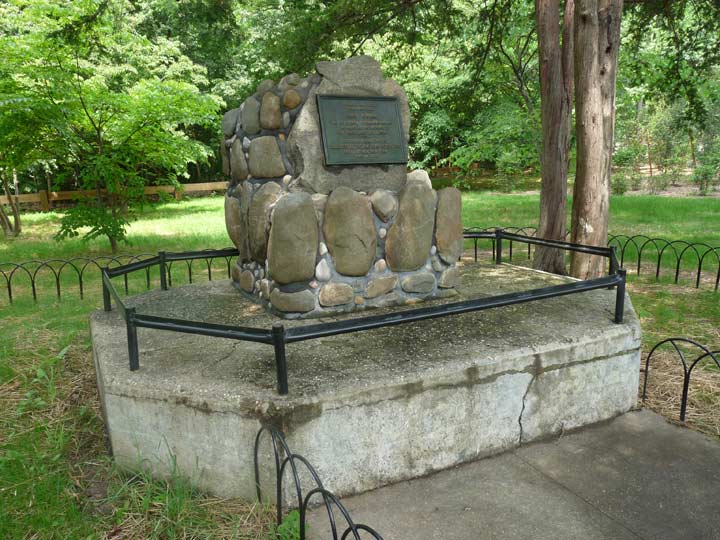 On the July 4th, I braved a sore back and the unlivable heat for a brief stroll around Woodlawn (the neighborhood, not the cemetery, though I did go past it). It’s a sliver of the Bronx wedged between Van Cortlandt Park, Woodlawn Cemetery, the Bronx River Parkway, and the undefended border of the Bronx and Yonkers. It’s an extraordinarily insular area, and in the past, a fellow shuffling about taking pictures has not been treated altogether kindly. Today, however, the residents were peaceable (on the holiday, not many were in evidence, anyhow). Locals call their neighborhood Woodlawn, while outsiders have it as Woodlawn Heights.

I had long heard of the Nimham Monument, but had never been able to find it. Strolling along Van Cortlandt Park East, It suddenly appeared.

On August 31, 1778, 17 Mohican Indians, led by Daniel Nimham and fighting on the side of the patriots, were massacred after their defeat by Colonel Simcoe and his Queens Rangers, fighting for the Crown. The Indians are commemorated at Indian Field in Van Cortlandt Park on E. 233rd St. east of Jerome Ave. The Mohicans, all from Stockbridge, Massachusetts, had tracked the British through the Bronx but were finally met by an overwhelming force of British and Hessian troops. This battle, on land owned by the Devoe family, was the only one in the Revolutionary War that occurred completely within what would become Van Cortlandt Park. 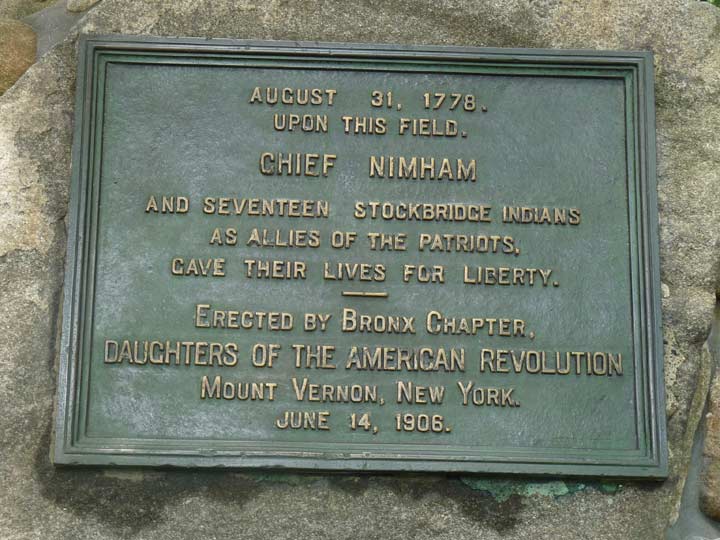 The Mohicans were buried in Indian Field by the Devoes and their gravesite is marked by a plaque and a cairn, a stone mound used in Scottish burials, at Van Cortlandt Park East and E. 238th Street. Chief Nimham was also commemorated by tiny Nindham Place in Kingsbridge Heights, but that street has since been demapped.

Very interesting! I’ve lived in Woodlawn many years and have read the plaque but never knew that American Indians were buried in Indian Field. Do you know if the specific location of the burial site is known? I ask because, technically, the plaque is not in Indian Field. It’s about a quarter of a mile north of Indian Field. Indian Field is the area near the corner E 233rd St and Van Cortlandt park East. At least that’s how it has always been defined to me and appears on local maps. I’d love to know where the buried site is. Thanks!

My Pop, who worked for a big Manhattan real-estate firm, inquired about this some time around 1940. At that time the “Indian Field” consisted of a couple of baseball / softball diamonds, a paved path or two, open ground, and some woods on the South fringe. The reply, received from somebody at a Parks bureau, was that no record existed concerning the burial site.

If I remember an earlier FNY display correctly, the rude layabouts who annoyed our Webmaster in this neighborhood once upon a time were lounging outside the North façade of Merk’s Pharmacy, on McLean Avenue a few steps East of Martha Avenue. Therefore, the unfogettably unpleasant incident occurred in Yonkers, not Woodlawn, whose undefended border lies about half a block Southward, closer to what used to be — in my childhood — Val’s Barbershop. Perhaps Woodlawn, properly speaking, deserves an apology. It’s not Woodlawn’s fault that FNY’s noble Webmaster chooses to wander into alien territory now and then! 🙂

According to other sources, the Indians were buried further in the park in a clearing which would be east of the New York State Thruway. The battle started along the path continuation of Oneida Avenue if it continued into the park. You can see a path on google earth street view. The deadliest part of the battle took place in a field and the Indians were buried near where they died. I never saw the actual place but have read about it. The British forces were stationed at what was called a redoubt? Atop a tall hill in Woodlawn Cemetery in the southeastern part overlooking Webster Ave. There was and may still exist a plaque marking the spot. I wish I could have seen the field where they were buried in the massacre but my dad and uncle were not fans of taking a young girl and her cousins deep into the park. No Indians were buried at Indian Field where my husband and my cousins played in baseball leagues when we were kids. I found this by searching online and there is an eBook called The History of The Bronx. I believe the van Cortlandt family manor land was originally occupied by Nimham’s tribe and the tribe moved to the area called Nimham Mountain near Kent in Putnam.County. So when they were fighting the British, I think they knew the local area. From Ann Marie L

It’s my understanding main fighting occurred along the stretch of what is now the Nursery Road and the Muir Trail. Simcoe left an amazing journal of the encounter. The Americans took their dead but left the natives. Locals found the bodies due to dog activity and buried them in a mass grave. It is believed to be on land near what is now the Ross Nursery at the end of Nursery Road. Indian Field and the monument do not have any remains. With the digging for the water tunnel station under that corner of Vannie years ago those remains are most likely buried deep.

My understanding is most of the graves would be in the quadrant of park bordered by the Deegan and the northern border now Parkway North. The naming of Indian Field was imprecise. See attached.http://gnadenhutten.tripod.com/patriotsblood/id4.html

Nimham’s son died in that battle alongside his father! Daniel Nimham fought for the rights of his people, even went to England and asked for an audience with the King so he could request the lands back due to them being taken wrongfully. He never got to meet the King & was sent home. He was a true warrior til the end!