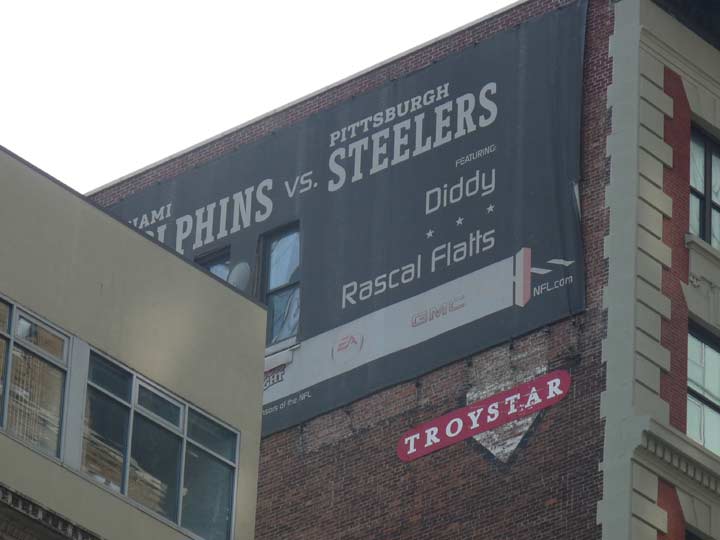 A sign advertising a long-ago NFL football game appears atop 1261 Broadway between West 31st and 32nd Streets, which runs through to 6th Avenue. The ad runs across the length of the building, and apparently can only be read from the upper floors of surrounding skyscrapers — most of it, except for the teams involved, can’t be seen except this view of it from 6th Avenue and 32nd Street.

The game was part of a promotion the NFL was doing to begin the season called NFL Opening Kickoff on September 7, 2006. As part of the festivities, the country band Rascal Flatts played a concert at Heinz Field in Pittsburgh, where the game was played, and Sean Combs (then calling himself Diddy; he is currently known as “Love”) appeared from South Beach in Miami.

Somehow, the ad for this game has now appeared high above Broadway and 6th Avenue for a good 12 years and counting!

I can’t imagine why the advertising agency put the banner in a location where it’s very hard to see.

I’m amazed that banner lasted 12 years in such good shape and isn’t completely faded despite all the storms (Irene, Sandy) blizzards, sun, etc. What’s that banner made of???

“Brother Love” is no more, it lasted only a short time because of copyright and trademark issues. It went up against the most famous “Brother Love”, a man named Bruce Prichard who used it as a gimmick in the WWE(a red faced, white suited pseudo preacher/manager) and against a second, stronger connection that is both trademarked and copyrighted is by a rocker from Nashville named Larry Florman who used the expired trademark as his own since 2000 and filed for it.

So Sean Combs is now known as “Love” in a vain attempt to keep the connection to his new album but he’s not able to be called “Brother Love”.