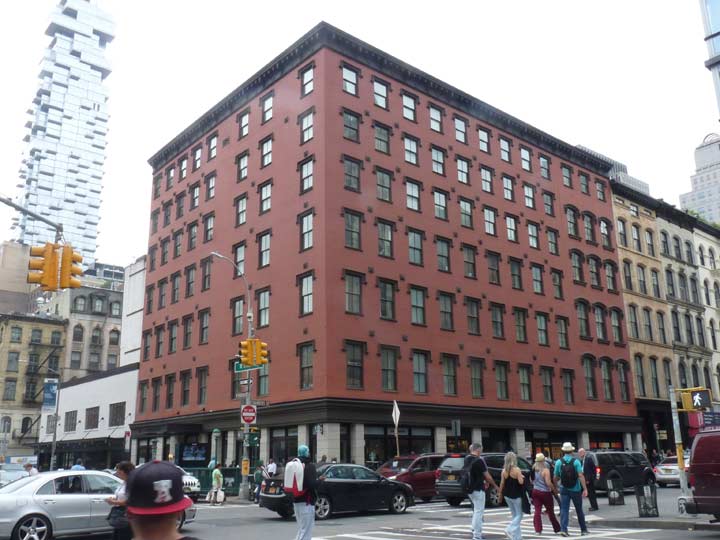 New York City’s oldest extant hotel building is hiding in plain sight at the busy corner of West Broadway and Chambers in Tribeca. Recently redubbed as a luxury hotel called The Fredrick, the Cosmopolitan Hotel’s pedigree goes all the way back to 1845.

That year, a tobacco merchant named James Boorman built a boarding house at the corner. At the time, Chambers Street was a tree-lined route on which personnel working for City Hall and neighboring endeavors lived. The building then at #122 Chambers was said to have been the first house in NYC with a bathtub. As commercial businesses started to fill in the area, Boorman built his new boarding house so travelers doing business at these places had a way to spend the night. What became the Cosmopolitan was originally 4 floors with New Orleans-style ironwork at the second floor. It wasn’t originally called the Cosmopolitan but initially was known as the Frederick and then the Girard House.

In the 1860s it gained two floors and changed its name to the Cosmopolitan (the seventh floor was added in 1989). It remained a respectable place for decades but by the 1960s, it was single-room occupancy called the Bond, just above homeless-shelter status. Its fortunes went on the upswing again as Tribeca became a hip neighborhood, and recently, new ownership has renovated it into a luxury place called the Frederick once again. It’s shown above with 56 Leonard, the “Jenga Building,” looming over it on the left.

The late great Christopher Grey discussed the building in the NY Times in 2009, and added some vintage postcard views.

When I worked 2nd shift at Western Union in the mid-60’s, I’d exit the train at Chambers & Church, walk up Chambers to West Broadway, and then up West Broadway to Worth. The Bond Hotel was pretty seedy at 4 in the afternoon, but at 1 AM it was definitely not somewhere you’d want to hang out. One night a guy was beating up a woman in the doorway. Being a brave 18 year old, I stopped and said “Hey”! They both looked at me for a moment, then finally the woman said “What do you want”? So much for chivalry…

I stayed here, in about 2006. I was part of a team working at the AT&T building at 32 6th Avenue. (I can’t say the other name.) We all came from California, but I was born in Brooklyn and grew up in New York. They stayed at a chain hotel in midtown. I stayed at the Cosmopolitan. My room was about $150 less than any of theirs. I had breakfast in a little hole-in-the-wall restaurant for about five bucks. They paid hotel prices.

The room was clean, comfortable, and SMALL. But it worked.

I think that the new “Frederick” is no less expensive than the competition at this point.