Between 1959-1964, when I was just being formatted, the city bruited the Gowanus Expressway through my neighborhood, which connected the BQE and the Belt Parkway junction at 65th Street and the Verraz(z)ano Bridge — just missing our apartment building. I was endlessly fascinated with the bridge construction, digging in the dirt in the park across 6th Avenue in imitation of the trench being dug for the expressway, and watched the towers going up and the cables being strung. Just think — future generations will have no direct remembrance of the VB being built, but I have it and those memories will die with me. 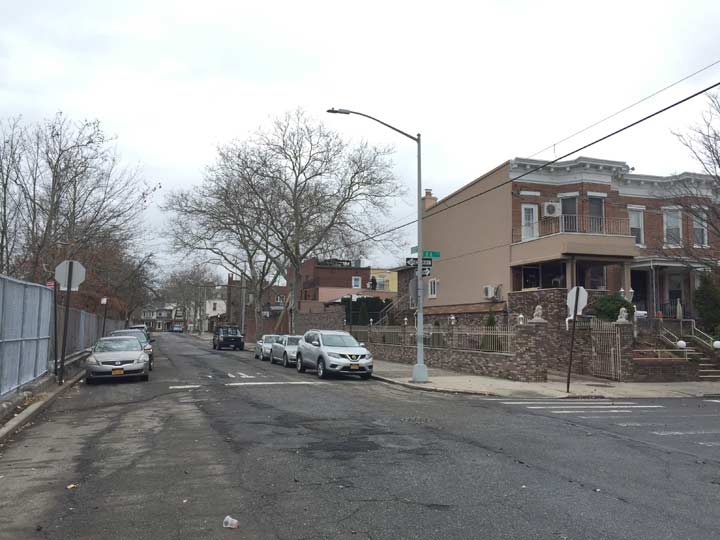 Today I want to discuss  a couple of new streets that were created along with the expressway, which, between 79th Street and 86th, went directly between Fort Hamilton Parkway and 7th Avenue. On its east side, between 82nd and 85th Street, running for 4 blocks, was the new street called Dyker Place. 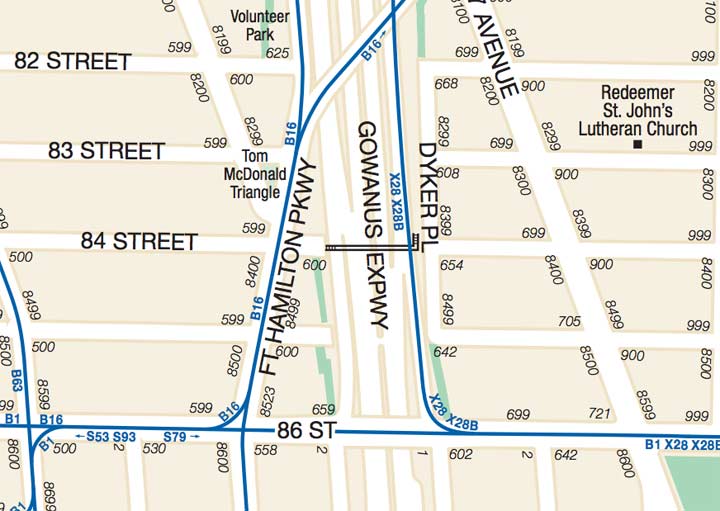 The name “Dyker” presents a bit of a puzzler for Brooklyn lexicologists. In Brooklyn By Name, Leonard Benardo and Jennifer Weiss assert that Dutch farmers who built dikes to drain the area’s wetlands in the colonial era gave it its name. However Van Dyke is a common Dutch name and a family of that name did have a hand in its development in the mid-1700s. Dyker Heights was more strictly defined when the Gowanus Expressway was completed in 1964, as the neighborhood’s boundaries can be set at 86th Street (and the Dyker Park Golf Course, where Tiger Woods’ father Earl played) the expressway, 65th Street, and 14th Avenue. It’s overwhelmingly residential and the only business streets are Fort Hamilton Parkway, 13th Avenue, and parts of 11th. The neighborhood is best-known and most heavily chronicled during the Christmas season, when many locals construct extravagant Christmas displays, especially along 84th Street between 11th and 12th Avenue. 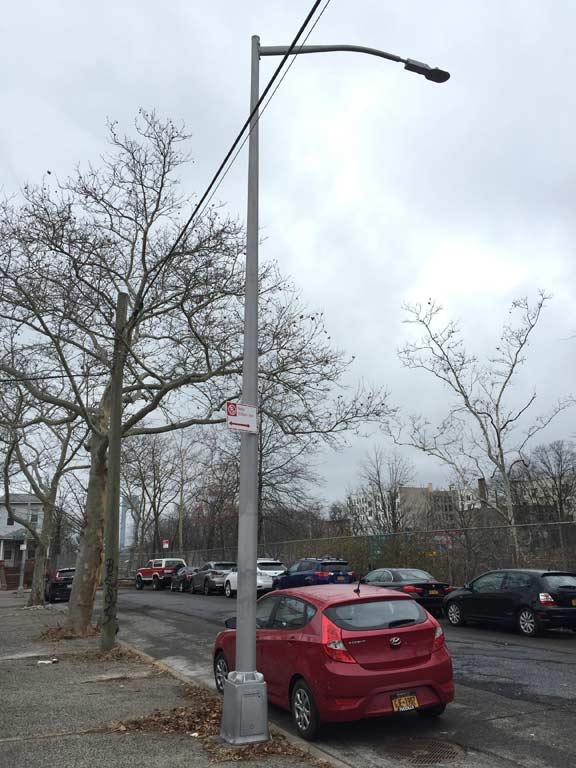 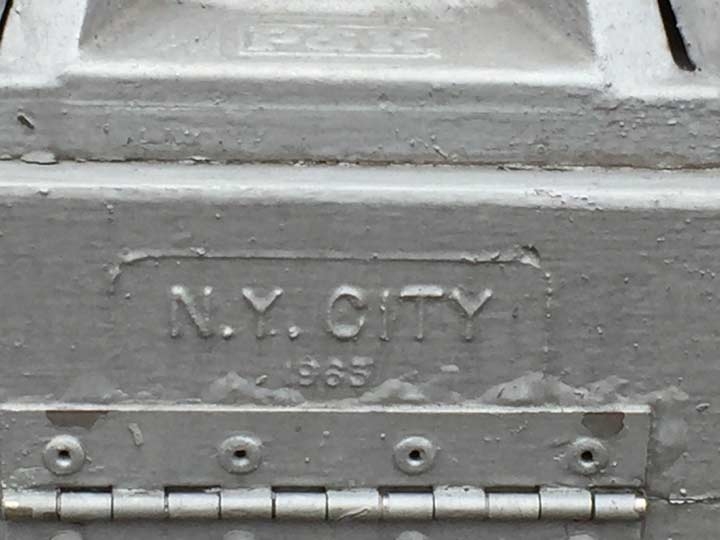 Just a few of the original cylindrical (as opposed to octagonally shafted) lampposts that lined the expressway and its service roads are still in existence today. Dyker Place has a couple of them. The manufacturer, P&K (Pfaff & Kendall) can be found on the base, as well as the date of installation, 1965.

There are no addresses on Dyker Place, as it was hewn from the side streets between 82nd and 85th. 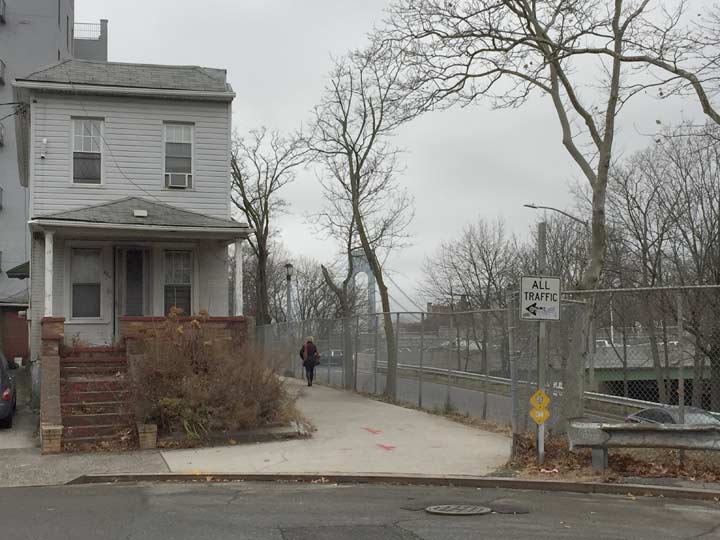 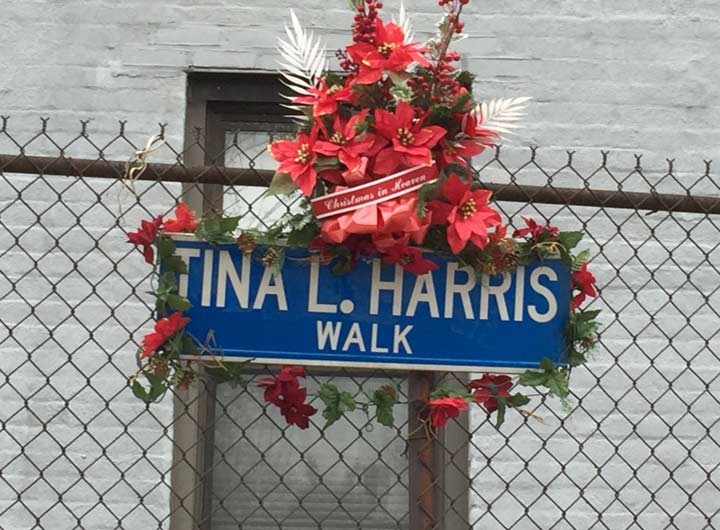 Though Dyker Place was not extended through to 86th Street, some years after the Place was opened, a walkway was built south to the busy route. It’s named Tina L. Harris Walk, though an internet search does not reveal who this person is or was. If you know, help me out in Comments. 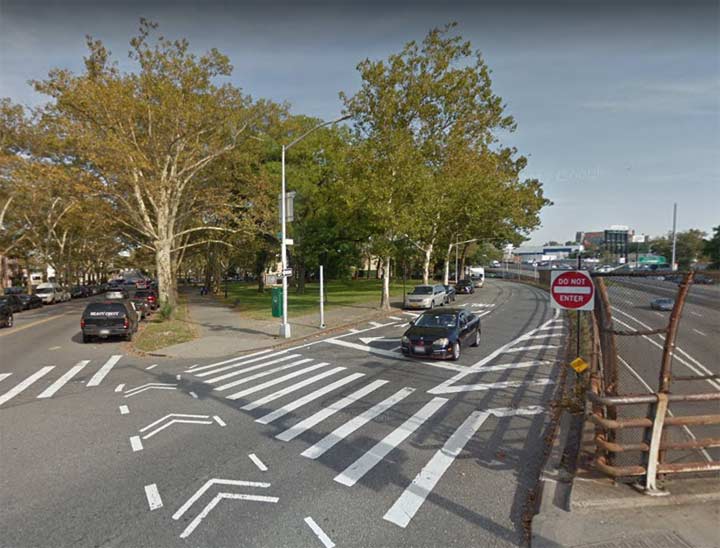 Further north, the service road that was created along the Gowanus Expressway connecting 7th Avenue and 67th Street with 6th Avenue and 65th Street was dubbed “Eirik Place.” It skirts the edge of Lief Ericson Square. I’ll preface my comments about Eirik Place by saying that the name of the famed 10th Century Norse explorer can be, and is, spelled in numerous ways, because Ericson himself used Runic characters to write his name — if he wrote at all. 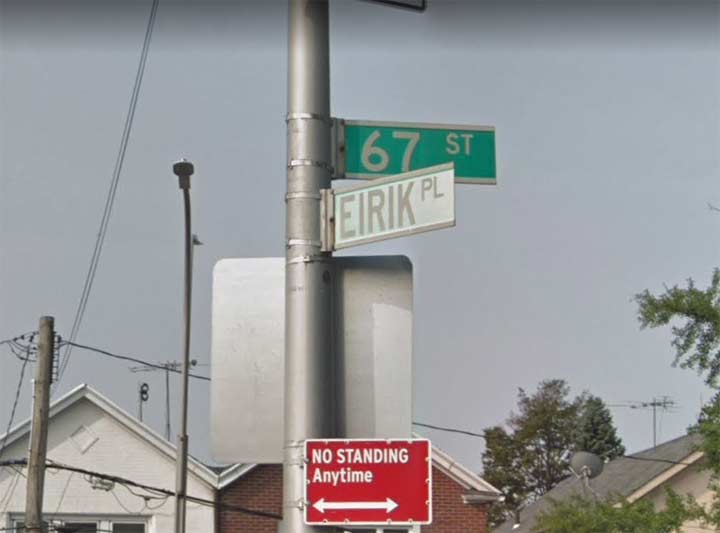 When street signs were first installed to designate the route in 1964, the name was spelled “Eirik” which was pronounced, as far as I know, “EYE-rick.” This green and white sign, considerably faded now, probably went up in the 1980s. 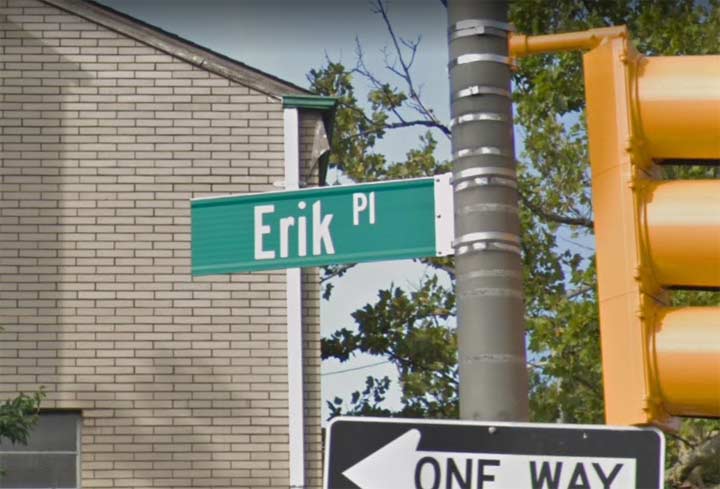 But there’s considerable disagreement about the spelling. This “Erik Place” sign at 6th Avenue is relatively new, as it was installed in the late 2010s. 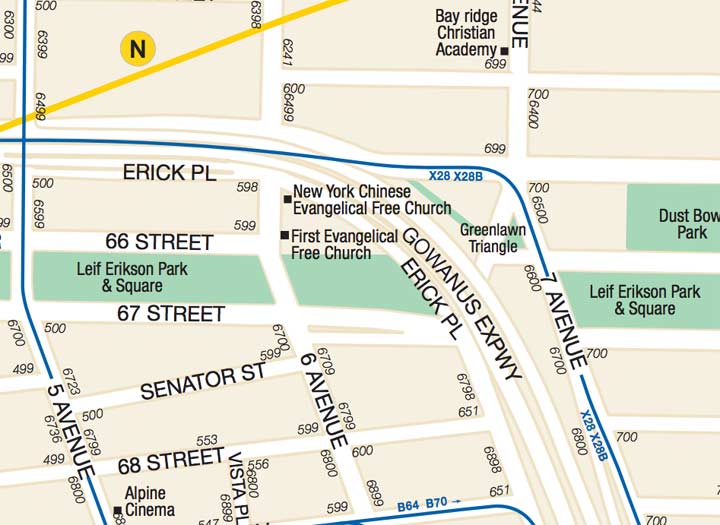 This MTA map of the area renders it as “Erick” but that’s plainly wrong. It’s also incorrect about 65th Street between 5th and 6th Avenue bearing the name, which it doesn’t. 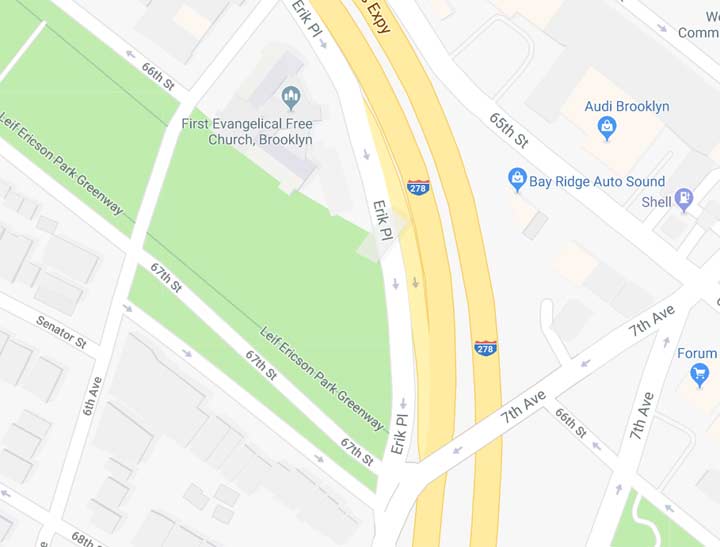 Meanwhile, Google Maps lists “Erik” which may be where the new Department of Transportation sign got the spelling. Meanwhile, paper maps like Hagstrom (except for the latterday computerized version, which got it right with “Eirik”) bothered with it.

There doesn’t need to BE an official spelling, since, like Dyker Place, no property abuts it and it has no addresses. But three spellings for such a short Place is weird.

Meanwhile, new streets continue to be created in Brooklyn. River Street, at the East River waterfront in Williamsburg, has been extended south through the new Domino Park. I will have some photos of that sooner or later, I was there in June 2018.

The floral bouquet on the sign makes me think that Tina L. Harris is dead, and probably fairly recently.* According to Google a young woman by that name was shot along with her boyfriend in Queens about 20 years ago, but what little I can find on the story does not show any Bay Ridge connection. I’m inclined to discount that one. The fact that Tina L. Harris had the walkway named in her honor must mean that she was a person of some note in the neighborhood, which normally would mean that there must have been some public mention of her death, but there isn’t any I could find. It’s quite a mystery …

* = I once read that it is very uncommon to find flowers or other decorations on gravestones more that thirty years after the person’s death.

I wonder why a street would be named for Eirik the Red anyway. It sounds like was he a commie and we don’t want any. I know his boy Leif Eiriksson discovered America but then he kept it a secret, so what good was that. He must have been in league with the Indians. They kept their discovery of America a secret from Europeans for millenia.– as overheard in Bay Ridge in 1960, “all dialogue is reported verbatim” as Stan Mack used to say.

In that photo of the base of the Pfaff and Kendall street light pole there is a connection to a tragic story. I attended a meeting of the International Association of Electrical inspectors in 1979 where Martin Burrell, the chief engineer of the Bureau of Gas And Electricity, discussed some major problems regarding Street Lighting in the City Of New York. One was the epidemic of thefts of the doors on street light bases. About a year later I noticed that all new poles being installed had a door with a very heavy duty hinge and two Allen head screws to secure the door closed to the base. In 1990 it was the electrocution of a little girl in a McDonald’s parking lot that led the City to action.She had touched wires that were protruding from an uncovered door on a pole in the parking lot.This led the City in 1991 to retrofit all street lights with a door that included a hinge so the door could not be removed. The contractor would supply a new door with a hinge, and the electrician would drill and pop rivet the new door to the existing base.
This was one of two major events in New York City Street Lighting in 1991. The other was the replacement of sixty thousand, 400 watt high pressure sodium luminaires with 250 watt, American Electric Lighting model 115 luminaires as part of an energy conservation program.

I live near Tina L Harris Walk. Holiday decorations and flowers are put up at every holiday. I once saw a man putting up the decorations…. If they fall down he picks them up and puts them back the next day or replaces them if they blow away. I pick them up also if it gets windy and blows them a bit away. I only saw him once. I regret not approaching him to ask who she was. One day if I see him again I will ask. I have searched to find out who she was. Couldn’t find anything.