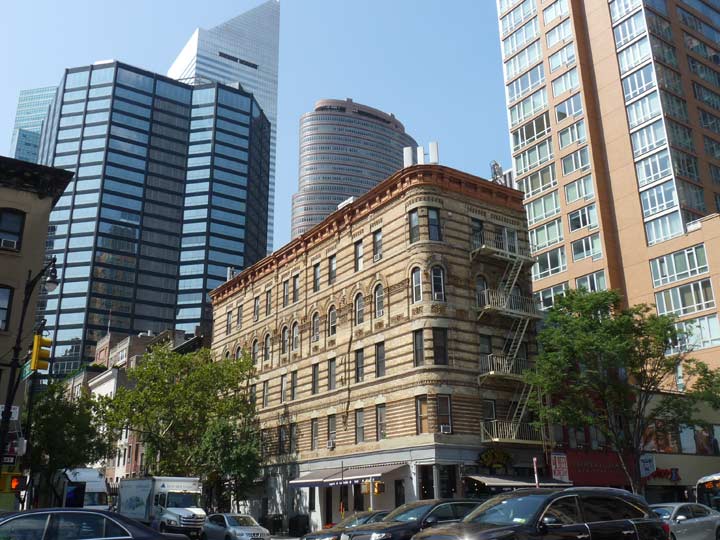 The Italianate apartment-mixed use building 985 2nd Avenue, on the corner of East 52nd, is loomed over by more recent structures such as 875 3rd Avenue (1982) in whose basement food hall I have lunch whenever I have a temp job at the Bloomingdales’ offices on East 55th a few blocks away; Philip Johnson’s 885 3rd Avenue, a.k.a The Lipstick Building (1986) and the slanted roof of the Citigroup Center  at 601 Lexington Avenue (1977). Hard to imagine but the Citigroup tower recently celebrated its 40th anniversary.

Though 598 looks like a sole survivor here that’s not the case. 2nd avenue itself is still lined with brick walkup buildings from the early 20th Century, punctuated by much younger streamlined office towers, while 52nd Street is among a number of Turtle Bay side streets that still retain much older apartment houses and townhouses that have been occupied at one time or the other by the likes of Katherine Hepburn and Bob Dylan.

1st and 2nd Avenues in Turtle Bay (like several avenues on the far West Side) are also home to what appear to be semi-abandoned holdouts.

They’re always avenue-facing tenements, with an active retail or restaurant space on the ground floor, topped by three or four stories of unoccupied “ghost” apartments, many still equipped with their original wood-framed windows (with glass covered in layers of soot and grime).

It’s relatively easy to get rid of (or wait out) a retail tenant to make way for a glass tower. It’s not so easy to evict a building full of residential tenants (especially if they’re rent stabilized).

As a result, in a city that sorely lacks affordable housing, those modest apartments have been empty for years.