At Beverly and Bedford Avenues in Flatbush is this huge Art Moderne monolith that looks like something straight out of the 1936 movie Things to Come (the third section, where Raymond Massey and his pals, who Know What’s Good For Us, have created a brave new world of automation, telecommunication, space travel and men wearing shorter miniskirts than the women). In this low-rise neighborhood, this stark, sculpted tower, with “Sears, Roebuck and Co.” spelled out in huge blue letters at the top is just a bit disconcerting. When I discovered it on a bike ride in the 1970s, I was amazed: I thought car-choked suburban shopping malls were the precincts of Sears, not two blocks over from the IRT Beverly Road station. But this Sears has been here since 1932 (a photo mounted inside shows First Lady Eleanor Roosevelt turning a ceremonial key to open the store) and was, in fact, the first retail Sears, Roebuck location in New York City. 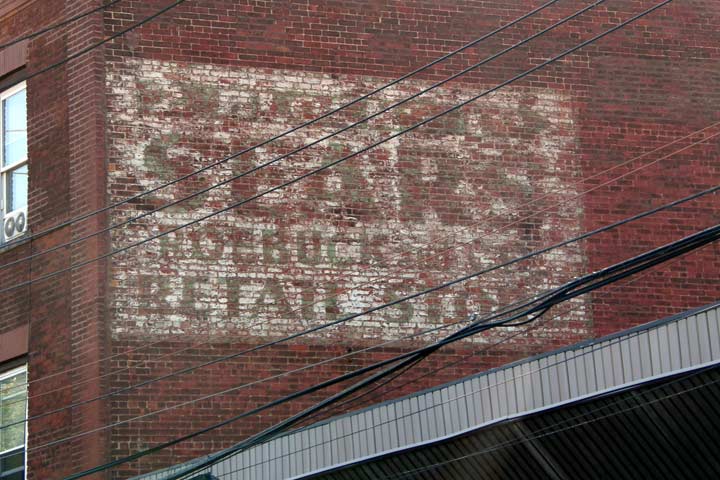 Sears was founded in 1893 by Richard Sears and Alvah Robuck and pioneered the mail order catalog. In the late 19th and early 20th Centuries, much of America was still rural and general stores were few and far between, offering a limited selection of goods at higher than generally affordable prices. The rise of the Sears, Roebuck catalog offered people an opportunity to mail order goods at consistent, affordable prices. The widely-distributed catalogs became known as “The Consumers’ Bible.” Alvah Robuck left the partnership in 1895, but returned as an employee of the company in the 1930s after suffering losses in the Great Depression. 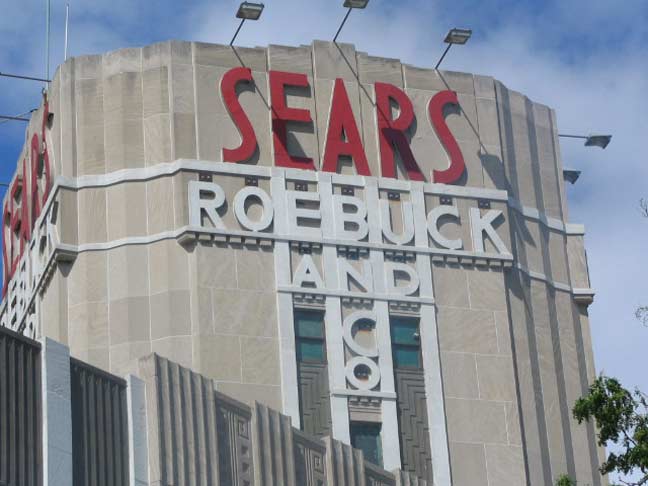 Beginning in the 1920s, Sears began to shift its focus to what we now call “big box” retail, a large store that would be located in urban business sections and later, in suburban malls after the rise of the automobile. Sears offices were located in what, for a time, was the world’s tallest building, the Sears Tower in Chicago, beginning in 1974, now known as the Willis Tower.

Sears has declined in recent years as online retail has been on the rise, and planned to close all its remaining stores, including this one, in early 2019 as bankruptcy loomed. The building itself has Landmarks Preservation Commission protection, and will remain in place despite the fate of the store.

1/9/19: It appears that Sears got another last-minute reprieve, but its status continues as endangered.

I worked here in 1968-9 while attending high school and college. Sears (and the A&P) alternated the distinction of being the #1 and #2 retailers back then. Lots of great memories of co-workers, and the nightly run to the Brighton Line (today’s Q train) after work so that I could just catch the subway home. Sears was a great store then. Many older co-workers had long careers that led to a retirement. It would have been impossible in 1968 to predict the long road into bankruptcy in Sear’s future.

I remember that building well. We would go there on some weekend afternoons and we’d run amuck on all the floors, playing hide and go seek. Just causing major mayhem. I was born in ’55, went to Holy Cross elementary school. We lived at 79 east 32 street, corner apts at Snyder and e32 st. in Flatbush.

I’ve heard the story about the store being opened by Eleanor Roosevelt also, but she wasn’t First Lady until March, 1933.

She was the first lady of NY State at the time

My father used to take us shopping at Sears. The electric lines that powered the Bedford Ave. trolley were still in place in the 50’s. I vaguely recall the ground floor having big display windows which may have been bricked in later on.

I guess Sears loved putting towers on its stores. The Sears in Hackensack, NJ is also from 1932 and has a very similar tower with sign. One of the details about the store I noticed as a kid in the 1960s, was that around the back (Anderson St & River St) side, there were friezes of an automobile tire with “Allstate” under or part of the tire and maybe a US map in a number of places. Some of these still were visible into the 2000s (I haven’t driven past in a while)

Towers sure were a hallmark–and trademark–of the early Sears stores, or certainly those built in at least the latter part of the early 20th century. Sears stores in Newark, NJ (somewhere in its South Ward, if I remember correctly), Union City, NJ (Kennedy Blvd & 32nd St (now a mall (Ironically, that Sears store moved to the new Newport Centre Mall in nearby Jersey City, NJ [my hometown, by the way].), and Market St & 63rd St in West Philly (technically in the neighboring suburb of Millbourne, PA). The latter was demolished after moving to Walnut & 69th Sts in neighboring Upper Darby, PA in 1992.

Think about the decline of one of the greatest innovators of retail. They became THE catalog store company offering people the ability to find and buy items without ever going into a store. They were the Amazon of their day. With a more innovative management team, they would have been primed to become the Amazon of today. All the back end ingredients were there — highly diverse and evolving product lines, warehouse distribution, phone and snail mail order taking. With these bones, all they needed was the vision to employee the internet to take orders. Some companies need to reinvent themselves. Sears just needed a tiny step and they could have been the largest e-tailer today.

My mother bought our first artificial Christmas tree here in 1969.

My Father took me to Sears to get a US Social Security Number at the age of 14 for my first job in 1967. SS numbers were not issued to newborns in that day!