Squibb Park at Columbia Heights and the BQE overpass was named for Dr. E.R. Squibb (1819-1900), a pharmacologist whose lab was located nearby. Squibb became a major commercial manufacturer; its slogan was ”the priceless ingredient in every product is the honor and integrity of its maker.” The company merged with competitor Bristol-Meyers in 1989.

Squibb constructed a large manufacturing plant at 25-30 Columbia Heights in the mid-1920s until most of the company’s plants were relocated to New Brunswick, NJ beginning in the 1960s. Subsequently the plant was purchased by the Jehovah’s Witnesses and became The Watchtower, recognizable by the large red neon sign overlooking the East River. The Witnesses owned a lot of property in Brooklyn Heights in the latter 20th Century including the Hotel Bossert on Montague Street. 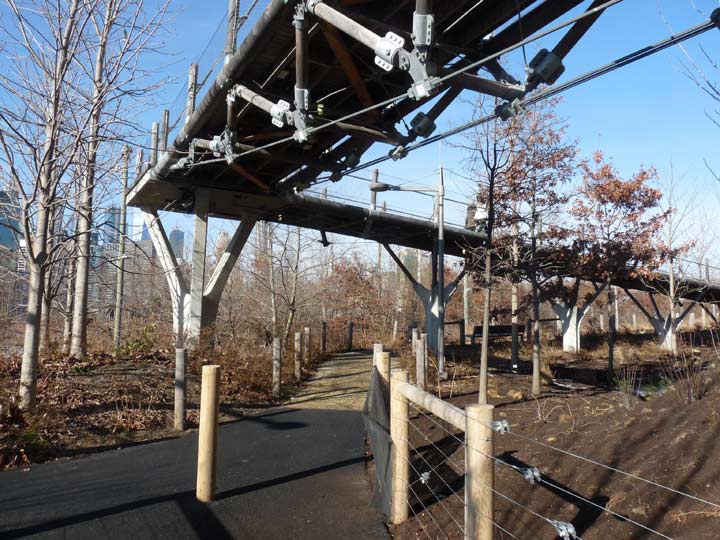 With the new Brooklyn Bridge Park under piecemeal construction (several sections have been opened, with the finished park expected to stretch from the waterfront along Columbia Street north and east to Main Street in DUMBO) engineers were faced with a challenge: how to get foot traffic from Columbia Heights across the Furman Street gulch to the new park. Thus the new Squibb Park Bridge was conceived and completed in late 2012. 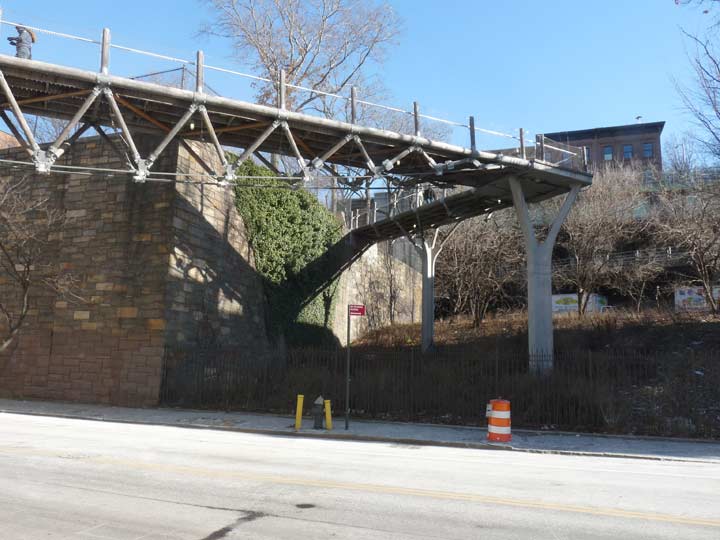 The bridge is constructed of Black Locust timber with bronze and galvanized steel connections that echo the material palette of the park. Black Locust timber is naturally rot resistant and an unusually strong, durable, and sustainable resource. The bridge consists of two under-slung suspension spans that open up views in all directions when crossing Furman Street. It has 42-inch-high lighted railings that are consistent with railings for the adjacent Brooklyn Heights Promenade and on the Brooklyn Bridge. The bridge is also ADA accessible. 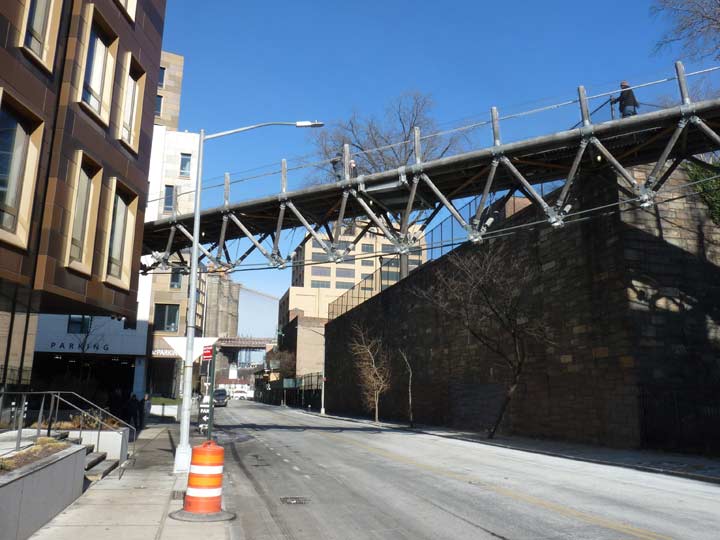 If you walk across Squibb Park Bridge, you may notice a little bounce in your step. The bridge was designed with trail bridge technology and is meant to be lightweight and flexible like the trail bridges in our state and national parks. So whether you’re a first timer or returning visitor of the Squibb Park Bridge, expect an extra pep in your step and know that this is completely normal and part of the design. Brooklyn Bridge Park 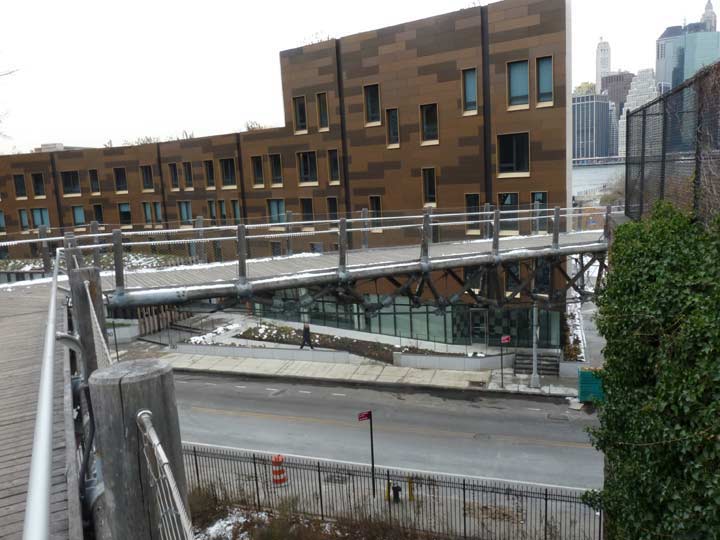 The Squibb Park Bridge did indeed have a little give, and swayed just a little as you crossed it, though certainly not enough to trigger a seasick reaction on my part. The experience reminded me a little of the Capilano Supension Bridge (constructed in 1889 and renovated in 1956) over the same-named river north of Vancouver, BC.  However, to some people I’ve been with, some of them on a FNY tour that traversed the bridge in 2014, the swaying was enough to make them feel uneasy.

The bridge did indeed have structural issues, and closed for a nearly 3-year period between 2014 and 2017. After reopening for a few months, the bridge was inspected again and the structural problems have persisted. Now, the swaying was a feature, not a bug. Nonetheless, Brooklyn Bridge Park management has decided to close the bridge, tear it down, and build a regulation metal bridge on the original bridge’s pilings. That bridge will open in 2020. 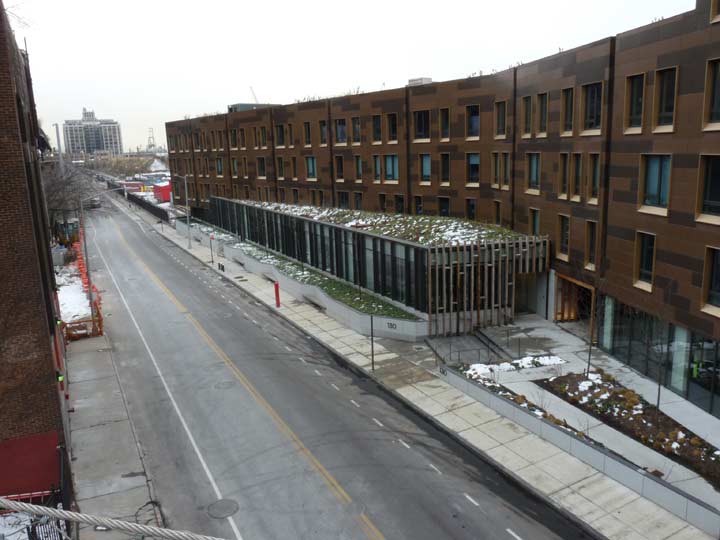 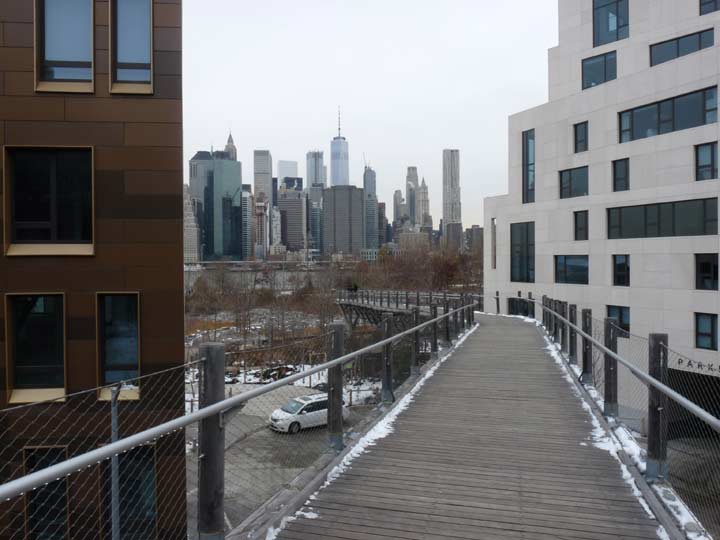 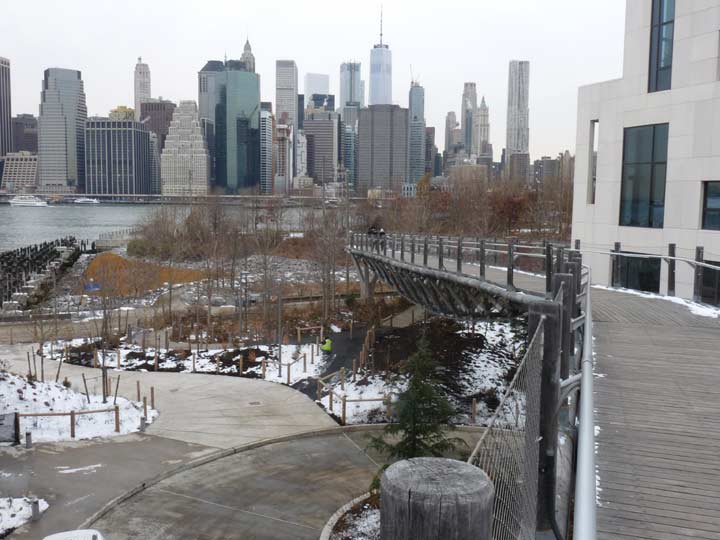 The Manhattan skyline seen from the Squibb Bridge 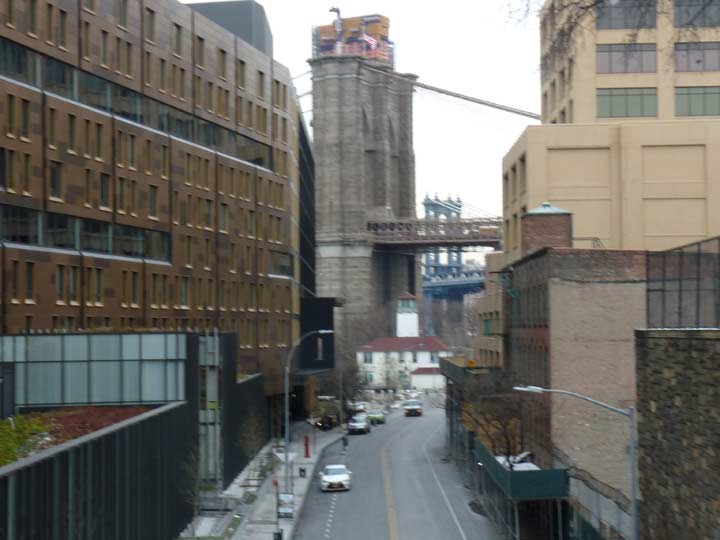 Looking north over Furman Street toward the Brooklyn Bridge 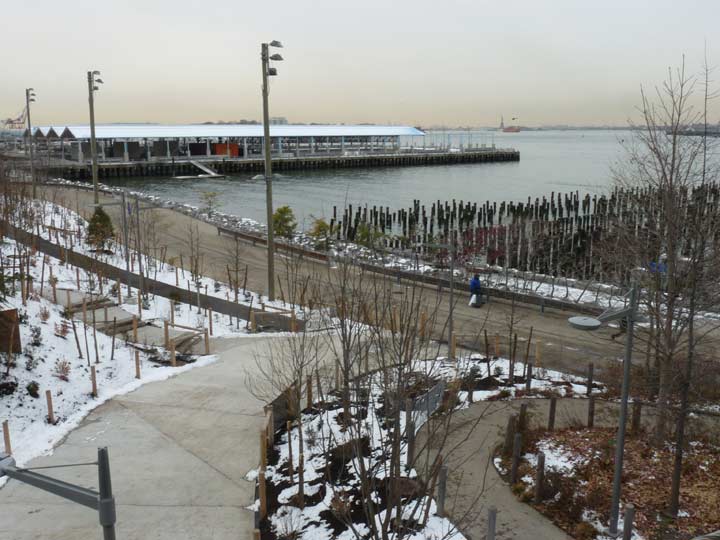 The Statue of Liberty on the horizon from the Squibb Bridge 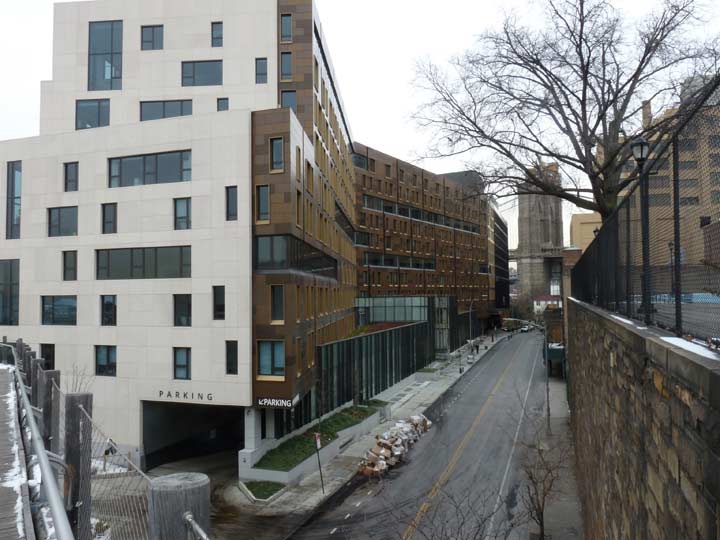 Two large brown and white objects have appeared on the East River side of Furman Street since 2016. They are the luxury residential buildings, 90 and 130 Furman Street. The buildings have completely ruined the view of Manhattan from Squibb Park, and compromised the view from the Squibb Bridge.

Today, the Furman Street waterfront is divided between parkland and luxury housing.

My first view of the improved site – looks very nice

It is too bad they are replacing the bridge with something unoriginal. I never knew of its existence until this post.

There has been much heated speculation about the influence of the real estate developers concerning the unsuitability of this bridge, focusing on the potential privacy concerns of prospective tenants in the adjacent residential buildings erected in recent years.

Whether this is true or not, I don’t think I’d want gawkers walking by with a full view of the inside of MY dwelling. Of course, one could always cut sheets of cardboard and fit them within the window frames to prevent that. Yes, that would nicely complement the appearance of those multi-million dollar “luxury” units.

Or you could buy drapes or something else. Maybe wear clothing inside your apartment…

In the 1970’s after Squibb moved out, I used to work the piers there – Pier 1, 2, 3 Port Authority.. NYC lost almost all cargo to NJUS after containerization took off.