Avenue A was laid out on maps all the way up to Harlem but only its East Village section remains. Other parts of it were renamed Asser Levy Place, Sutton Place and Sutton Place South, York Avenue and Pleasant Avenue.

The Place is named for dry-goods merchant Effingham Sutton (1817-1891), who struck it rich in the 1849 California Gold Rush and initiated clipper ship service to San Francisco and attempted to develop real estate in the far East Side of Manhattan. However, the streets surrounding Avenue A did not become the high-rent district it is now until the 1920s, when Anne Morgan of the Morgan financial family moved there. 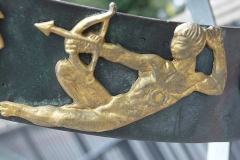 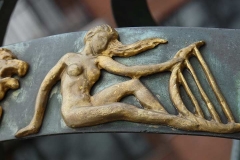 At the southern end of Sutton Place south and East 53rd Street is a small green space, Clara Coffey Park, and its centerpiece is a globe tilted at the same 23-degree angle the Earth has as it circles the sun, along with a pair of rings embossed with signs of the zodiac. The globe, known as an armillary sphere, was sculpted by Albert Stewart and installed in 1971 and was a gift from local philanthropist Hugh Adams. Coffey Park was named for landscape architect Clara Stimson Coffey, who was the chief of tree planting for the NYC Parks Department in the 1920s and 1930s.

Pretty sure the globe functions as a sundial, same as the one on the Brooklyn Heights Promenade.