A Forgotten Fan named Danny passed along several ancient map excerpts purporting a newly discovered ancient street in Sheepshead Bay. Me being me, I deduced straight away that it was Emmers Lane, a roadway that leaves little trace today and likely hasn’t been a real thoroughfare for nearly a century. Nevertheless, guidebooks like Geographia’s “Little Red Book” duly listed it, and it even turned up on printed Hagstroms and the like until the 1960s. I attempted to find it on bike rides to Sheepshead Bay while living in Brooklyn, but I found nary a trace or street sign. However, years of writing Forgotten NY have given me more of a trained eye and I can now ferret out ancient ways that other people may miss.

Here’s a modern-day aerial view of Sheepshead Bay and we can see that there’s a small area at about East 15th between Avenues X and Y in which the property lines are slanted. This is always a tell tale sign of a lost road. You can also make out faint slants in the property lines of buildings from East 16th east to Ocean Avenue, almost at Avenue X. The slants also run west to East 13th Street.

This is a real estate ad published in 1877 advertising building lots on the former estate of the recently deceased John Emmers, showing future streets on the planning boards. Here, north is to the right, and at the top of the diagram is a “road leading to the woods.” This later became known as Emmers Lane. Map courtesy Gravesend historian Joseph Ditta.

Jumping ahead, by 1886 the Sheepshead Bay Racetrack has been built east of Coney Island Avenue. Horse racing was made illegal for a time within NYC after 1910 and the track was used for auto races for a few years until it was eliminated without trace and new streets and residences were built in its place.

Emmers Lane can be clearly seen running from Sheepshead Bay Road northeast to Ocean Avenue, which was built in the 1870s.

By 1890 plans were afoot for a new grid of streets, but at this point most were just paper streets. Actual roads were rendered in purple. We can see that East 14th, Jerome Avenue (which ran along the south end of the racetrack) and Sheepshead Bay Road were already trafficked. Today, Sheepshead Bay Road is in 3 separate pieces but on this map, you can see the connection running along today’s East 13th Street.

Emmers Lane was built as well, and shows up as a direct route from Sheepshead Bay Road and Ocean Avenue.

By 1929 the grid is well established with new buildings along completed streets. The Brighton Line was now part of the BMT and was placed on its own embankment, which eliminated grade crossings. Circled in red, Emmers Lane still shows up, but it’s getting engulfed by the new developments, and as new houses were built, it stopped being a through lane. It had been bisected by the railroad embankment, to boot, further compromising its importance. 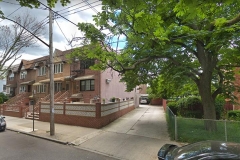 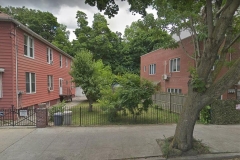 Can Emmers Lane be spotted today? Yeah, if you peel your eyes enough and know what you’re looking for. On East 15th Street between Avenues X and Y you can see a driveway on a slant on the west side, and a yard with an adjoining building with a slanted edge on the east side. This is the right-of-way that once belonged to Emmers Lane.

Thanks for posting this. 🙂

Do you know when the street was officially de-listed?

A similar example is some missing blocks of 20th road (Old Bowery Road) near Hazen Street.

Raised in Sheephead and this was a nice piece.

What maps did you use and where did you find them?

I had no idea this tiny little guy existed. After looking at Google’s satellite view, it’s painfully obvious that a street was there. The Yelp pages for Doody’s actually has it listed as between Ave Y and Emmers Ln., I wonder how they dug that up.