March 2019 marks Forgotten New York’s 20th anniversary. To celebrate the occasion, I’ve re-scanned about 150 key images from the early days of FNY from 35MM prints. In the early days, when people including me were accessing FNY with dial-up modems, I had to save photos really small — in some cases, just 4″ across. I couldn’t find all those early photos — I think I foolishly discarded some along the way — but all month, and into the spring, I’ll be picking out some and showing the newly scanned versions.

Sometime in 1998 or 1999, I was crazed from the abominable heat, stumbling down the Coney Island boardwalk, when I noticed some smashed-up bits of wood suggestive of former buildings that had long been abandoned, all arranged on an alleyway between West 32nd and 33rd Streets. They alley was unmarked but was lit by a single standard-issue Department of Transportation lamp on a telephone pole. I suspected that I was looking at an ancient discovery.

That sent me scurrying to the handy online version of the 1929 Belcher Hyde Brooklyn atlas, which revealed the alleyway as Sea Place and the wood houses part of the Lincoln Baths complex.

In the Coney Island history website Amusing the Zillion, Coney-area historian Charles Denson, who grew up in Coney Island in the 1950s and 1960s, revealed that the Lincoln Baths were built around 1900 and were part of a “Presidential series” of Coney Island bathhouses along with the Jefferson, Roosevelt and Washington Baths. Thus you could say that Coney Island had a Mount Rushmore of bathhouses!

“The bathhouses were where people rented lockers and changed from street clothes to swim suits. You could also rent swimsuits and beach chairs and umbrellas,” writes Denson. “They were very social places and generations of families and friends from the same neighborhoods patronized the same bathhouses for years until the last one (Brighton Beach Baths) was demolished in the early 1990s.” [Amusing the Zillion] 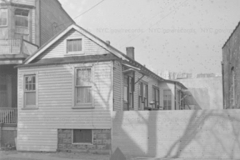 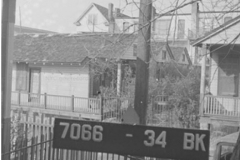 A pair of shots from the NYC Municipal Archives reveal what the bathhouses and buildings along Sea Place looked like in the 1940s.

March 2019. There are still traces of Lincoln Baths to be found here…some stone foundations, and a couple pieces of wood. In the summer this would be an impenetrable weedy lot as suggested by the above photo of Sea Place. According to Denson, the Lincoln Baths houses were abandoned in 1982 and have slowly broken down since.

From 2010-2011 part of the old Lincoln Baths parcel was developed as Coney Island’s first beachfront condominiums were constructed. For a cool $650,000-$1M you can live by the water. Time will tell how successful these dwellings will become. In the above photo, Sea Place has been retained as a driveway, but few if any residents recall it under that name or as the former location of the Lincoln Baths.

SNAPSHOTS FROM THE WPA GUIDE

“You could also rent swimsuits”

I sure hope they were, you know, washed really thoroughly between customers.

Given that they were wool, that’s a big “yes”.

Nu, so what would be so terrible? Nothing beats free to top off a beautiful day at the shore!

The word “crabs”was left out because I used an emoticon of a crab in lieu of the spelled out word. Please correct vhen you get a moment, dahlink. Sorry – Now I can finally rest in peace. Aaach!

Living by the water was fun 60-70 years ago. However, with todays SUPER STORMS becoming the new normal, I think a mountain retreat would be the preferred place to live.

Given that they rented swimsuits back then, is there any remaining clocks along the beach that were used to tell bathers what time it was so they could return their swimsuits?

I know that the one in Revere, MA still stands 122 years after it was christened, standing tall watching over Revere Beach without anyone knowing why a clock is on the beach in the first place.

As a kid in the eighties and early nineties, I remember a concession stand on W 33rd Street at the foot of the boardwalk. Looking at the boardwalk it was on the left side, which would make it part of the Lincoln Baths. The West 33rd bay was heavily populated with residents of Bensonhurst.

Spent 7 months 2 blocks down, 35th to 36th between Surf and the Boardwalk building a monstrosity for John Katzadamedes. During Foundation excavation we found the brick remains of another Bathhouse about 100ft off the Boardwalk. Got a rather nice selection of Beer bottles dating from 1900 to 1940 for my collection.

OMG…My father used to take us to Washington Baths in the 1960s. They had a HUGE saltwater pool, & I believe a small strip of private beach. It’s also where I experienced what I still consider one of the 1st comedic traumatic experiences of my life: The shvitz bath. I initially resisted, but dear ol’ dad assured me I’d love it.

Imagine being a 7 year old entering the steam filled chamber, eye level with bloated geriatric bellies which looked like they were well into their 3rd trimester. And just below that…well, let’s just say I never looked at a punching bag the same way again.

had a lot of good times there also we stayed out of the steam room there were a lot of old gay men in there trying to well you know,,

I grew up in Coney Island Houses at 3020 Surf Ave (31st Street). My Grand parents moved there in 1967 from west 36th between Surf and Mermaid when I was 3 yo.
Those projects were SPECTACULAR at that time and the maintenance rivaled any high end condo today.
I remember that little area those rotting houses were in. They were mostly small, white dilapidated bungalows that working class families would rent in the summers to spend time at the beach.
There was a rental sign (like a trailer park) but I can’t remember the name of those bungalows. I remember hanging out with kids a few times who were staying there.
Truthfully there was something strange and creepy about those little rental bungalows.
The last I remember seeing people renting there was about 1973 or 74 then they were abandoned…Probably because Coney Island was progressively turning into a nasty, dangerous slum.
I remember abandoned cinder blocked bath houses and buildings all over Coney Island including Lincoln Baths and the Childs restaurant site….
I remember on 33rd st (near Sea Place) along the ramp to the boardwalk in the late 60s, early 70s there was a small candy store operated by two old ladies that sold candy and drinks to beachgoers….
Does anyone remember the blonde Coney Island Irish? It seemed as if they were an Irish Traveler clan that showed up there 100 years before. They originally lived around the perimeter of that (Canal Ave)
bay on Neptune Ave to where Home Depot is today… Pro boxer Johnny Turner (fought Benitez in the late 70s) was one of them…