From 1982 to 1988, the BMT 8th Avenue station serving the N train in Brooklyn was my daily means of getting to my night job at Photo-Lettering, the city’s biggest typesetter, located in the United Nations area in Manhattan. In those years, the area around the 8th Avenue station on the boundary of Sunset Park and Bay Ridge was transforming into New York City’s third Chinatown, after lower Manhattan and Flushing (which was also in transformation at the time). Indeed, the number 8 is a lucky number in Asia.

At the time I lived in a 3-room apartment on 7th Avenue and 73rd Street. This intersection is not particularly close to a subway stop. As a rule, I would cross the 72nd Street pedestrian crossing over the Gowanus Expressway and then walk to 8th Avenue and 62nd Street where the station was. I could also take the R train home (a local as opposed to the express N) to either the Bay Ridge Avenue or 77th Street stops, as both offered a marginally shorter walk. Bear in mind I either worked from 5PM to 3AM or 7PM to 5AM in those years, so barring overtime, I would head out in very late afternoon and arrive home very early AM or shortly after daybreak in the spring and summer.

The 8th Avenue station is an unusual one. Stations on the N between 8th Avenue and 86th Street in Gravesend all opened in August 1915, but the transit line dates all the way back to the late 19th Century when it was part of the Sea Beach steam railroad, taking steam engine trains to the Sea Beach Palace Hotel in Coney Island. The 1915 work was part of the Dual Contracts (IRT and BRT, the predecessor of the BMT) subway expansion program of the 1910s.

While most Sea Beach line stations were placed in open cut stations that offer no views of their surrounding neighborhoods, 8th Avenue is a bit more airy and spacious, allowing views of the surrounding area. It is actually bridged over the Bay Ridge Branch of the Long Island Rail Road, currently leased for freight service by the NY & Atlantic Railroad. Before the 1920s it actually had passenger service, and there are preliminary discussions about restoring passenger service in some form (if anything is done, it won’t be completed in my lifetime). 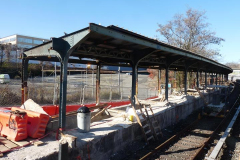 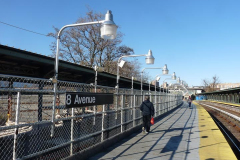 For over two years, between 2017-2019, the 8th Avenue station underwent a complete reconstruction. By turns, the two side local tracks were taken out of service to the overhangs and canopies could be worked on and new artwork installed. The express (center) track was pressed into service and temporary platform were constructed. Full service was maintained at 8th Avenue and Kings Highway, where temporary platforms were built, but southbound and then northbound stations skipped stations in those years. Work proceeded at a snail’s pace, but full service was restored in mid-late 2019. 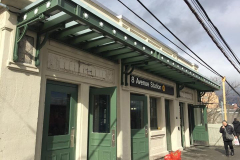 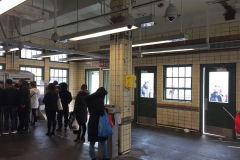 Though there’s been a lot of coverage of Heins & LaFarge’s subway station design in the heart of the Beaux Arts era in the subways’ Original 28 stations in 1904, and the ones built up to 1908 when they bowed out, Heins & LaFarge’s protege and successor Squire Vickers is less well-known; he designed IRT, BMT and IND stations up to 1940, and came up with the original Machine Age IND streamlined designs.

He also designed the station houses for open cut and grade BMT stations on the Brighton (B,Q) West End (D) and Sea Beach (N) lines, as well, and now that they’re being rehabilitated I’ve come to respect and appreciate their designs with beige tiles and green/gold geometric shapes. To me these stations, most of which are on the Sea Beach, are worthy of NYC Landmarks status. 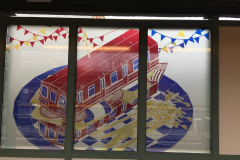 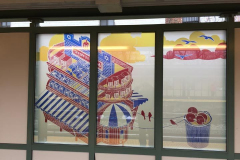 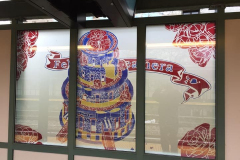 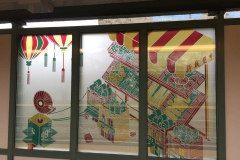 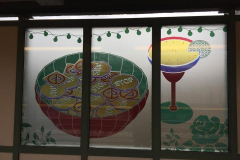 I need your help here, identifying the artist behind the new 8th Avenue artworks. As a rule the name is inscribed on small plaques found at intervals along the station walls, but they don’t seem to have been installed when I inspected the station in February 2020. The panels are engaging, depicting Asian, Jewish and Hispanic scenes from polyglot Sunset and Borough Parks.

If you know the artist, advise below in Comments.

Update: Olalekan Jeyifous is the artist, and the piece is called Made with Love. 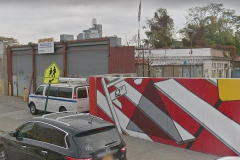 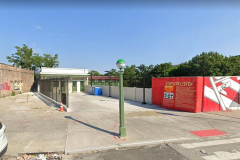 I’ll admit it. Though I lived in Bay Ridge for 35 years (1957-1993) I was completely unaware of the 7th Avenue fare control and subway entrance to the 8th Avenue station, though I had been aware of the unused track crossover. I rarely bicycled or walked down 7th Avenue then and so, didn’t suspect its existence. As you can see from these Google Street Views from 2013 and 2018, the station house had been obscured by a gated warehouse and is set way back from the street. A lamp stanchion now identifies a subway entrance here. 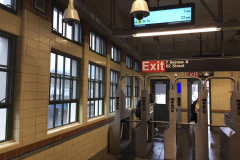 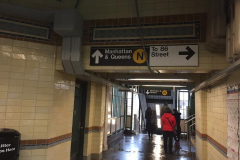 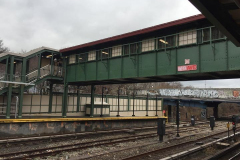 The 7th Avenue station house interior is a near match of the 8th Avenue version shown above. The crossover has also been restored and reopened. Each had been unused for over a generation. The MTA is currently embarking on reopening selected station entrances that had been closed for decades in some cases. 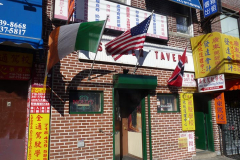 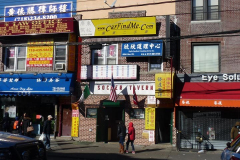 In the area surrounding the 8th Avenue station…

Soccer Tavern, 8th Avenue near 60th Street, was likely named for the nearby soccer fields at the Dust Bowl at 8th Avenue and 65th Street. It has served a variety of nationalities over the years.  It has been the Soccer Tavern for over seven decades and now has a mixed Irish and Chinese clientele. Only in New York kids!

For years without fail, from 1982-1993 every week on a Monday or Tuesday, I would troop over to this diner for a meal. When I worked nights I’d go before work, and when I worked days, I’d go after work. That, though, was before 2004 when what had been Zeke’s Roast Beef turned into Park Asia. Zeke’s had been there since the early 1970s. Zeke’s soldiered on for a few years on 3rd Avenue but gave up the ghost eventually.

Thanks for the article. Per the MTA’s Arts for Transit website, the artist is Olalekan Jeyifous, and the artwork is called “Made With Love.”
http://web.mta.info/mta/aft/permanentart/permart.html?agency=nyct&line=N&station=23&xdev=2598

Olalekan Jeyifous is the artist, and the piece is called Made with Love! (They put up a plaque pretty recently, I think.)

To illustrate the parochialism between the City of Brooklyn and New York; when I lived nearby in the 1970s the 8th Avenue Sea Beach Station had two stairways to the platforms. Don’t recall how the Manhattan bound stairway was marked, but the other taking you to trains bound for Coney Island did not have any destination marked. Instead, they simply read “FROM CITY”. So it wasn’t important where they were going as much as where they were coming from. Can anyone say if such signs still exist?

OMG…LOL!!! You left out the horribly loud “quiz show wrong answer / Baby Jane” buzzer that accompanied the flashing, lit by incandescent bulbs housed behind disgusting dirty lenses you could hardly see through. These were at the Avenue U station on the Brighton line, & always wondered about the same thing you did. Like Coney island wasn’t destination worthy, but we should bow down & pay tribute to the train from “The City” that lowered itself to pick us up & take us to the beach. Da noive!!!

One of the redesign proposals was to construct it in the form of a giant takeout container, but was quickly quashed, much like one for the Main Street/Flushing line station signage that never saw the light of day: The ill conceived idea was to hyphenate “Flushing” to “Flu – Shing” in Chinese style characters. Thankfully these are the only examples I heard of; I shudder to think of others that could’ve been just as bad or far worse.

If the proposal had been accepted then the IRT #7 would go from Flu-Shing to Corona: oh the panic/chaos! (but wait, isn’t that the new normal already?). Regards to Dr. Martin Abend (dec’d).

Lived on 59th St / 8th Ave in the late 1950s-early 1960s. My Dad would walk me down 8th Ave to the Sea Beach Line trench, passing a 7-UP bottling plant. I think there was a ballfield somewhere down that way, where’d we play whiffle ball. Then we moved to Staten Island and I became a fan of the SIRT.

Gosh, hit “Submit” too soon. My Dad and I went back to cruise the neighborhood in the 80s, and yes, very Asian. When we lived there, it was very Norwegian.

Bryan C, do you remember Johnson’s candy store on one of the corners of 8th Ave and
59th Street? I grew up and lived on 60th between 7th and 8th from 1942 through 1966. The kids on 60th rarely went to 59th, and vice versa, because we were unwelcome on the other block. Happily, Johnson’s was neutral territory since it was the best candy store in the area.

I suffered the Sea Beach Express subway just about every day, usually getting on from the 7th Avenue entrance to the 8th Ave station from 1956 until I left Brooklyn in August, 1966 just around the time that the neighborhood’s name was changed from Bay Ridge to Sunset Park. I guess we were too poor for the grandees from Bay Ridge.