While scrolling around Facebook lately, I stumbled on a bit of Astoria history that is hiding on Newtown Road, blocks away from the place where it was originally constructed. I have lived in Queens since 1993, and yet I was unaware of this bit of minutia. 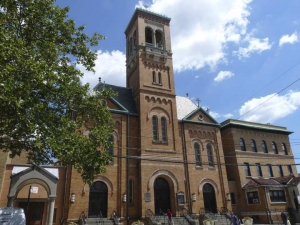 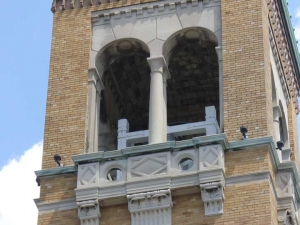 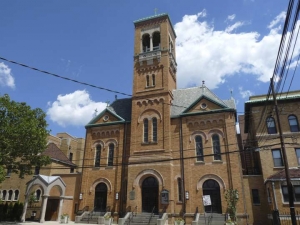 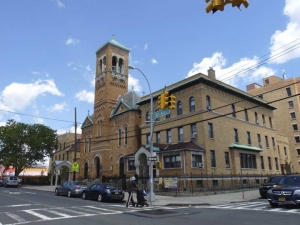 One of Queens’ most gorgeous brick churches, St. Joseph’s R.C. Church is on 30th Avenue between 43rd and 44th Streets. The church was organized in 1877 when there was a large amount of German Catholics in the region (the Steinways had set up their piano manufacturing plant in Astoria that decade), with the first wooden structure erected in 1880, and the current building with its massive campanile (bell tower) in 1906. Catholic churches seem to build the equivalents of small towns for their parishes, and the church is surrounded by a school rectory and convent.

However the present rectory, on the corner of 30th and 44th, isn’t the original one. A couple of decades after it was built, that building was jacked up and moved to the corner of Newtown Road and 47th Street, where it can be seen today in a much altered condition. Photo and watermark: Greater Astoria Historical Society

Like a number of streets and roads in NYC, Newtown Road isn’t named for the neighborhood where it is, but for the neighborhood it runs to. And, like a number of NYC streets that run aslant the overall grid, it’s one of the older roads in the area. It is an Indian trail that became the main road to early Astoria settler William Hallett’s farm in the mid-17th Century, and to the treacherous Hell Gate, the East River crossing to Manhattan. Its eastern stretch that ended in the heart of Newtown, now Elmhurst, was called Hurlgate, or Hellgate, Ferry Road; south of Northern Boulevard, it was later named for the town through which it passed, becoming Woodside Avenue.

I’d love to know about the demolished rectory of St. George’s church across the street from my home on 27th ave. Between 14th and 18th streets. We tried to no avail to save it and the Queens preservation council did not deem it worthy even though the area was named for its benefactor.

St. Joseph’s and its surroundings are the setting for the movie “A Bronx Tale” http://onthesetofnewyork.com/abronxtale.html

The top of the bell tower also looks like it was redone…?