When most New Yorkers think of Murray Hill, they likely think of the area on the east side of Manhattan, just south of the United Nations between 34th and 42nd Street and east of Madison Avenue…and they well might, since its tree-lined streets harbor beautiful brownstones, high rise buildings and townhouses. It is home to prominent professional, political and social clubs, as well as the recently renovated Morgan Library – a must visit for both NYers and visitors alike.

Murray Hill has never been a small town on its own, as so many Queens neighborhoods like Long Island City, Jamaica, Flushing or Newtown (today’s Elmhurst) had been. It’s always been considered to be the eastern end of Flushing, and been a planned development carved out of Flushing’s vast acreage of plant nurseries in the late 1800s. In 1889 developer Frederick Dunton, a shareholder in the Long Island Rail Road, purchased large parts of the Robert Bowne Parsons estate, divided it into lots that quickly were snapped up. A railroad stop, school and firehouse were built (their descendants remain in place today, though the original school is now a modern structure (PS 22, the Thomas Jefferson School, on Sanford Avenue east of Murray Street). Murray Hill did develop a separate suburban identity from Flushing that it retains today; though multistory apartment builings were constructed near the Murray Hill RR station, they had a panache that today’s quickly proliferating multifamily buildings lack.

Before the neighborhood was developed by Dunton, the Murray family also held a lot of land in the area, and of course partnered in some of Flushing’s former plant nurseries, and also owned the Kingsland mansion on 37th Avenue that is now the home of the Queens Historical Society. Murray Street and Murray Lane are named for the family.

When Dunton developed Murray Hill, the Long Island Rail Road added a station in 1889, complete with a station house that sold tickets. When the LIRR undertook a grade crossing elimination program in 1912-1913 it elevated some stations and placed others in open cuts, with Murray Hill among the latter. The station house was then placed on a pedestrian track overpass until it, too, was removed in 1964; since then, Murray Hill tickets have been sold on board, and later with vending machines. 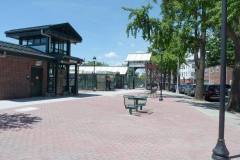 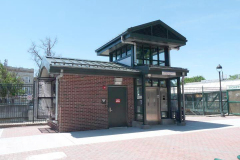 When I moved to Flushing in 1993 my home was sort of midway between Broadway and Murray Hill, so in the morning I could choose either station to go to work. Middays, the LIRR runs a skip stop schedule, stopping at one station or the other because the two are close together.

However, they were among my least favorite stations on the LIRR because management allowed them to slip into complete decrepitude. The LIRR cannot platform all its cars on the short Murray Hill station; and in the 2000s, part of the Broadway station was closed off when it started to crumble trackside.

In the mid-2000s all that changed when the LIRR completely remade and renovated both stations, adding new access points, artwork, and new pavements and platforms. One of the new additions was a pedestrian crossing that has open air, allowing views of the track in both directions.

One last addition at Murray Hill occurred in the late 2010s when the LIRR took almost 3 years to build a new elevator. Construction was delayed when the manufacturer did not deliver the cabs on time. The elevator finally opened in May 2020.

Murray Hill remains one of the most problematic LIRR stations, as it’s subject to flooding and leakage when it rains, as well as the local youths’ relentless graffiti marking. 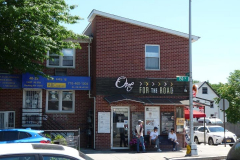 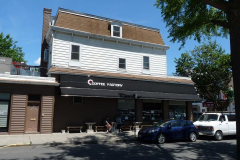 Coffee shops abound on streets surrounding the station, between 41st and Barton Avenues at 150th Street… 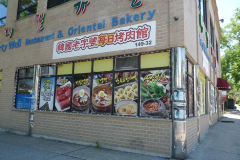 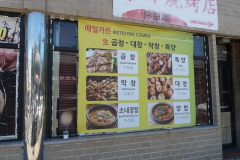 Asian intestinal delights, for sale at 41st Avenue and 149th Place. It says so, right there on the sign. You’ll have to tell me what this tastes like.

One correction please. After the original Murray Hill Station building was closed, no tickets were sold there. Vending machines came much later. Persons who boarded at Murray Hill either had pre-purchased tickets (monthlies or weeklies or one-way), or paid the conductor a one-way fare on the train without a surcharge. The current vending machines date from the early 2000s, and must be used in order to avoid paying an on-train surcharge.

shame on you no mention of the long running Beplat hardware store.

For the most part, many just consider this neighborhood part of Flushing as it feels as if it doesn’t have much of a distinction.