As I’ve documented quite a bit on FNY, I worked in the Turtle Bay area in NYC from 1982-1988 and again, briefly, in 2018, at 216 East 45th Street. However, I worked for Photo-Lettering, the city’s biggest type shop, in the 1980s and for Summit financial publishing in the dead of night on the third shift, and I’d often find myself battling a reverse rush hour commuting home to Brooklyn and later Queens in the morning. At the time it never occurred to me to walk around the neighborhood with a camera as crime was a big problem. I restricted myself to heading down to the corner for lunch around 2 or 3 AM.

Thus, I never encountered the Beaux-Arts Institute of Design at 304 East 44th Street between 1st and 2nd Avenues. I was amazed when I saw this building, not least because it was built in an Art Deco style, not a Beaux-Arts style. (For a typical Beaux-Arts building, think of the Customs House facing Bowling Green downtown; Beaux-Arts buildings are characterized by plenty of ornamentation and statuary).

The Society of Beaux-Arts Architects was founded in 1893 by American architects who had studies at the Ecole des Beaux Arts in Paris. In 1916, a school of architecture, the Beaux Arts Institute of design, was founded under the auspices of New York University. The school soon expanded to teach sculpture, painting and interior design. Tuition was free with moneys raised through donations and an annual lavish costume ball.

By the mid-1920s it was obvious that the school needed more space; two townhouse plots on East 44th were purchased and a design contest was held with the winner emerging as Briton Frederic C. Hirons. The new Art Deco school opened in 1928. 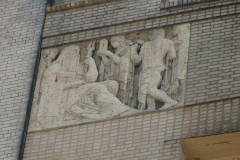 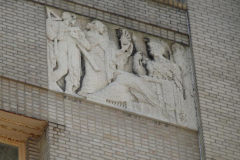 Though streamlining was the rule with Deco, some of the old Beaux-Arts design peeks through such as this pair of bas reliefs depicting Greek scenes of the spirit of architecture at the roofline on either side. 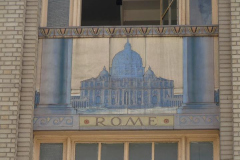 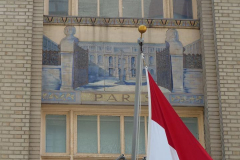 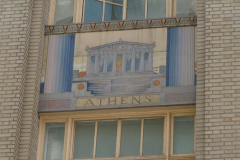 Probably the building’s most notable feature are three polychrome terra cotta panels (fashioned at the Atlantic Terra Cotta Company in southern Staten Island) below the third floor windows depicting the Parthenon in Athens, the Ecole des Beaux Arts in Paris, and St. Peter’s Basilica in Rome. Three more such panels were supposed to go beneath the second floor windows, but there weren’t the funds for them.

Design elements like this in brilliant terra cotta are often found on Art Deco buildings. These appear on either side of the very tall front doorway.

By the 1940s, the Institute had moved out and the building was converted to offices, recording studios, editing labs and viewing theaters and today the building serves as Egypt’s primary mission to the United Nations. However the exterior is 99% unchanged from how it looked when it opened in 1928.