I hadn’t been to Captain Tilly Park lately, which occupies an irregular plot on the border of Briarwood and Jamaica Hills. Much of it isn’t bordered by streets, but by the back yards of houses on 164th and 167th Streets and also by 165th Street, Chapin Parkway and Gothic Drive. I find it a peaceful oasis especially from bustling Hillside Avenue a couple blocks south of it.

Finding Captain Tilly Park and Goose Pond were a pleasant surprise for me when I moved to Flushing in 1993 and started cycling around the borough — I was unaware a large, pleasant park like this was here, to be honest. It’s also sort of out of the way — I traveled down twisting Chapin Parkway, and there it was, just past the second bend in the road.

The park was built on land owned by the Highland Park Society (the park’s southern boundary is Highland Avenue), who sold it to NYC in 1908 for the bargain price of $1.00, with a stipulation that it remain a public park. Until 1995, Goose Pond was fed by underground springs, but since a park renovation in 1998 it has been kept clean by a filtration system. 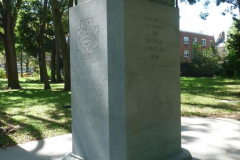 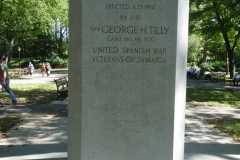 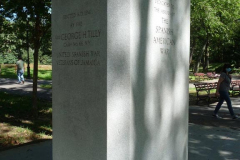 There is a Spanish-American War monument in Captain Tilly Park — a war that is somewhat underrepresented in NYC statuary. The park’s honoree, Captain George H. Tilly, was killed in action (as part of the Army Signal Corps) in the Philippines on May 22, 1899. On the island of Panay to repair a damaged telegraph cable, he ignored warnings to go mufti, and he and his group were fired upon; all but Tilly from among his group made it back to their boat safely.

The Tilly family once owned the land where this park sits. After the Highland Park Society sold it to the city, it was called Highland Park, then Upland Park; it was named for Tilly in 1935. The stele honoring Spanish-American War veterans was placed in the park in 1941.

The four sides of the monument to Captain Tilly lists four countries – Cuba, Phillipines, Puerto Rico – and China! The first three were sites of the Spanish-American War, but China wsa not involved. That one doesn’t fit with the others, and I don’t know why China is listed. .

Thanks for this! I grew up in the group home a block away from there, and I’ve spent plenty of days (and nights) in that park!

This was one of my childhood parks and I went to Jamaica and would always take the high road above the pond.

I went to nearby Jamaica High School. But, as a young boy, used to ice skate on the frozen pond in winter, and belly-whop (do they still say that?) on my sleight down the big hill. One day, I was skating on the pond and everyone kept saying, “Hey, Ray!” to me. I couldn’t understand this. Eventually I was brought face-to-face with Ray. He looked like my twin and had on the same coat and glasses. So, I met my doppelgänger in Goose Pond Park (that’s how all the locals referred to Captain Tilly Park back in the day). So, if you’re out there Ray, I send my greetings.