I’ve mentioned it before, but as a kid, maybe between 4 and 9 years of age, one parent or another took me for joyrides on local buses in Bay Ridge so I could get a good look at the lampposts and the infrastructure. Maybe one Sunday we would ride the B63 down 5th Avenue downtown, or maybe the B37 down 3rd, winding up downtown again. Perhaps it would be the B64 which went to Coney Island then. Or the B16, which in those days wound up south of Prospect Park at Ocean and Woodruff Avenues. Feeling especially ambitious, we might transfer from the B16 to the B35 at 39th Street and ride it down Church avenue to Flatbush. In the 1960s, the latter two buses wound up in dodgy areas, crime-wise, so we were taking something of a chance. I would be absolutely rapt at what I was seeing out the window, and maybe bring along a pencil, Carvel plastic spoon, and flashlight bulb so I could imitate the lampposts.

When I approached college age, I was reminded that maybe I should cut that out. But I’m getting away from the point.

The B16 traveled down Caton Avenue between Fort Hamilton Parkway and Ocean Avenue; along part of it runs NY State 27, which I discussed in this FNY post. In the Bible of Brooklyn street names, Leonard Benardo and Jennifer Weiss’s Brooklyn By Name, they explain that the avenue was named for Susan Martense Caton, who owned property including a large house (now vanished) at Caton and Flatbush Avenues. Her son-in-law was Philip Crooke. Caton, Crooke, Martense can all be found on Flatbush street signs.

I should also mention a long-gone candy emporium at Flatbush and Caton, where I spent what seemed like hours pondering the offerings. It was incredible, in my recollection. If you know its name, shoot it to me in Comments. 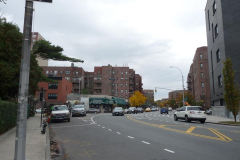 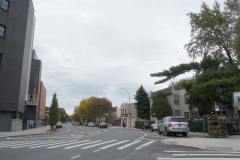 Anyway, even at age 5 or so, I was noticing things about street layouts. As the B16 passed Ocean Parkway on Caton, the avenue does a bit of a dipsy-doo, bearing right, then bearing left, at East 7th Street. And, the intersection of Caton and East 7th is unusual. It looks as if a new avenue is issuing from East 7th because Caton comes to a stop there as it curves. It’s hard to explain but if you live around there, you know what I mean. It’s as if they stitched two avenues together.

And that’s exactly what happened.

So here’s what was likely the original street layout according to this 1890 Kings County atlas plate. As you can see the street layout is in place, but only a few roads, shown in purple, have been built; the rest are ‘paper’ streets, or are maybe there but unpaved and unfinished. The small yellow boxes are houses so there wasn’t much built here where Kensington meets Prospect Park South.

Caton Avenue is laid out heading east from Fort Hamilton (Parkway) and Gravesend (McDonald) Avenue. East of Ocean Parkway, planners call for it to head directly east to Coney Island Avenue, where it proceeded northeast at the south end of the Prospect Park Parade Grounds.

But there was a monkey with that wrench. There was already a very small populated area between Ocean Parkway, Church, and Coney Island Avenue, with its own street layout. Caton Avenue could not be bruited through there, and that street layout is in place to this day, though the street names have changed; Henry Street is now Kermit Place, Montgomery Street is now Friel Place, and a southern extension of 18th Street as well as Poplar Street became East 8th Street. The city of Brooklyn did manage to build East 7th Street south beginning at Kermit Place, paralleling Ocean Parkway, but Caton Avenue was another matter.

Move the clock forward to 1929, and you can see, at the top of the map, that the two parts of Caton Avenue were still disconnected from one another. One part of Caton ended at Ocean Parkway while another began at East 7th. The City of New York, in subsequent years, abandoned that short mapped section of Caton east of Ocean Parkway and built an angled section, connecting the two at East 7th, and thus, a continuous Caton was conceived!

Here’s the modern Caton Avenue route, as it has been since the 1930s apparently. Robert Moses slammed the Prospect Expressway through in the mid-1950s.

Meanwhile, I hadn’t been around here for about a decade, so I was surprised to find some things. 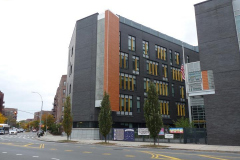 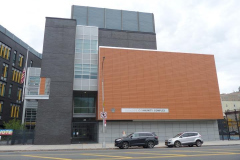 The huge new PS 130/Parkside Community Complex now absolutely dominates the north side of Caton opposite East 8th. The complex was built in 2014, and I had been away for so long I forgot what was here before the school. 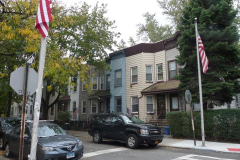 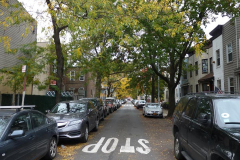 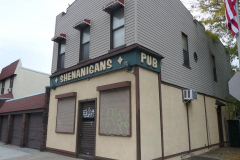 A clue that the little gaggle of streets south of Caton Avenue is older than the surrounding streets is their narrowness, which is often the case. The intersection of East 8th and Caton is the only place in the city I’ve seen curbside flagpoles. My guess is that their placement has something to do with PS 130’s beetling presence across the street.

It was strange to see a pub like Shenanigans shuttered in the middle of Sunday afternoon, but that’s the virus for you.

If you waste a lot of time googling like i do- http://lostnewyorkcity.blogspot.com/2014/06/the-saga-of-flora-mir.html
[former Brooklynite, Florida since 1990]

Was it Finkel’s Candy Store on Caton between 21st and Flatbush?

What pray tell was the name of this forgotten humble hamlet south of Prospect Park submerged by the spreading Metropolis?

From a Google search, it’s possible the candy store was Finkel’s?

Was the candy store Jules, on Flatbush near Caton?