“Amersfort” is a fairly well-used Brooklyn name. Like Utrecht, it is Dutch in origin. It’s also used for Amersfort Park, a full city block in East Flatbush defined by Avenues I and J and by East 38th and 39th Streets. 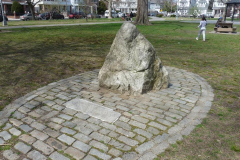 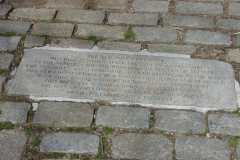 Amersfort Park is a pleasant surprise if you’re passing through. It is atypical of NYC neighborhood parks in that there are no athletic fields or even jungle jims or swings — it’s just a pleasant green space with lawns, paths and benches. A former name for Flatlands is “New Amersfort” and the decorative stone monument in Amersfort Park is a copy of a 200,000-year old rock found in Amersfoort, Holland. The nickname for Amersfoort, Keistad (stone-city), originates in the Amersfoortse Kei, a boulder that was dragged into the city in 1661 by 400 people because of a bet. This story embarrassed the inhabitants, and they buried the boulder in the city, but after it was found again in 1903 it was placed on a prominent spot as a monument. The town is a province of Utrecht, from whence many colonial-era Dutch settlers hailed, and the namesake of New Utrecht Avenue in Borough Park.

There had even been a third Amersfort in Brooklyn… the former Amersfort Avenue, which ran for a block from Avenue T at East 53rd Street south to Flatbush Avenue at Avenue U. In a true puzzler, after the nearby Kings Plaza Shopping Center opened in 1970, the then-Department of Traffic renamed it as a southern continuation of East 53rd Street, and the older East 53rd between Avenues T and U was then renamed East 53rd Place. Why the DOT didn’t leave well enough alone is beyond me.

There is another Amersfort…. Amersfort Place around the Brooklyn College…. My mother lived on that street. one side of her building was Amersfort Place… the other side was East 27 Street.

Been living in NYC half a century and can honestly say I never heard of this place. That’s why I like FNY so much.

There is also an Amersfort Place, near Brooklyn College, which extends from Campus Road to Glenwood Road.

Of that, I am aware.

There is also an Amersfort Place, near Brooklyn College, which extends from Campus Road to Glenwood Road.

I grew up on the Amersfort Place which was near Brooklyn College, so that’s another instance of Amersfort in Brooklyn. We also went to this park often and one of my first memories is standing by one of the benches.

When the gym closed due to the pandemic, I was thankful to
have the park to walk laps every day from March to Septembe. It’s a great and safe park.

In the forties and fifties I lived only a few blocks from this park, but never knew it had a name. I have photos taken in this park on my wedding day.

Amersfort Park is actually located in Flatlands, Brooklyn, not East Flatbush. Flatlands is a neighborhood within Community Board 18 in Southeast Brooklyn. There are photos of the Amersfort Park in bloom on the Flatlands Independent news and media website at https://www.facebook.com/flatlandsindependent

It is most certainly in East Flatbush defined by Avenues I and J and by East 38th and 39th Streets as the article states!!

When I lived in the neighborhood in the 70s, everyone called it “J Park.”

I went to P.S. 119 and spent countless hours in this park. Thanks for the memories. Question: Was it always named Amersfort Park?

I grew up on East 39th Street just beyond Ave H. We used to picnic occasionally in the park which we always knew as Vanderveer Park.