THERE are a couple of artifacts in Maspeth that may seem like a head-scratcher, as there are a couple of pieces of infrastructure that reference a neighborhood a couple of miles away, Ridgewood. There are a pair of brick posts on 53rd Avenue east of 65th Place, and a pair of more more elaborate archways on 65th Place at Jay Avenue. What are these Ridgewood items doing here? Have they been transplanted?

In 1928, much of Queens was still largely unpopulated and unbuilt-upon. Ridgewood, however, was an exception to the rule, due to its proximity to Brooklyn, and real estate developers hoped to capitalize on the cachet of the neighborhood. By then, Ridgewood was dominated by attached brick and brownstone houses, as well as blocks of handsome, yellow-bricked apartments constructed by developer Gustave X. Mathews. He built from materials created in the Staten Island kilns of Balthazar Kreischer. 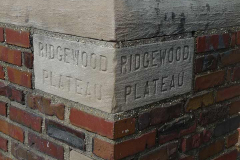 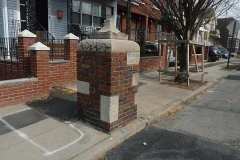 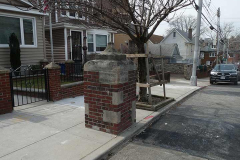 In that year, the developers Realty Associates purchased 70 acres in a neighborhood then labeled as “North Ridgewood” but now a part of northern Maspeth roughly defined by Maurice Avenue, 64th Street, Grand Avenue and 74th Street. Builder John Aylmer set to work constructing two and six-family homes in the newly-named Ridgewood Plateau, so named for its location atop one of Queens’ higher hills.

To identify the development, Realty Associates placed brick posts emblazoned with the words “Ridgewood Plateau” carved into the concrete, as well as a quartet of iron arches at 65th Place, Maurice Avenue and Jay Avenue, marking the northern and southern ends of the development. The words “Ridgewood Plateau” were painted in gold leaf on a plaque attached to the iron arches’ apices.

Over time, the iron arches became rusted and the gold leaf was worn off. Occasionally, an iron arch would be painted, staving off further rust, but no real ongoing maintenance would be performed until 2014 when the Juniper Park Civic Association, the Newtown Historical Society, Maspeth Federal Savings, the Communities of Maspeth and Elmhurst Together and Maspeth’s O’Neill’s Restaurant arranged for the restoration of the arches by Woodside artisan Larry Madine.

As part of the 1928 development, 65th Place was paved and graded from Roosevelt to Grand Avenues. Along with 69th Street, once called Fisk Avenue, 65th Place provides a direct vehicular route from Woodside to what was once Ridgewood Plateau.

THE END OF MACDOUGAL

The first link within the post is dead. Doesn’t go anywhere.

You have no idea how much I hate it when websites are taken down.

Years ago I remember looking at a map and guide of the Triboro Coach Company network, long before Triboro’s routes became part of MTA Bus Company. One route, probably the Q18, was identified as serving the Ridgewood Plateau, among the many neighborhoods that route still serves. I couldn’t figure out the exact location of the Ridgewood Plateau and forgot about that neighborhood moniker until it was mentioned in this posting. Thank you for jogging my memory.

The Q18 route still follows the same route as it did years ago. The current schedule, posted on the MTA website, makes no mention of Ridgewood Plateau – Q18 is identified serving Maspeth, Woodside, and Astoria.