In April 2022 I went to see an old friend in Bath Beach, way down in southern Brooklyn. No, it wasn’t somebody I knew from work or school, it was Mill Road, which is a dirt path with paved stretches running from 27th Avenue to Bay 43rd Street a football toss away from Cropsey Avenue. New York City features a number of Mill Roads, Mill Lanes, Old Mill Roads and _________’s Mill Roads that, of course, hark back to the era when there were a number of grist mills or water mills in the colonial era. In many cases, such roads were there a long time before the prevailing street grid was laid out and constructed. That’s what happened with Mill Road in Bath Beach.

I have already written what I consider to be a definitive look at Mill Road back in 2010, so here, I’ll touch on it briefly and just show you what I found here 12 years later.

This 1890 map shows Mill Road and a grid of streets in what was known as Gravesend Village. Today only Mill Road survives, and only two blocks at that. Today’s grid of streets were only ghosts on a planning board then, shown by the buff-colored lines; only the purple roads were actually in existence. Interestingly the vertical line on the right side was known as “the Road to Gravesend Village” and its east end still survives as Lake Place.

Mill Road formerly was the only road that led into a spit of a peninsula formed by Gravesend Bay and what was called Harway Basin. One would imagine that a mill was located on the peninsula, hence the name of the road. Walking Mill Road today, it’s hard to imagine that a waterway once licked its east side. This map also explains why Cropsey Avenue curves south to cross Coney Island Creek. What it doesn’t explain is why Harway and Cropsey Avenues inexplicably changed names at some point in the 1930s.

Mill Road as seen from its southern end at 27th Avenue.

The most interesting remaining dwelling on Mill Road on the corner of 27th Avenue.

The east side of Mill Road north of 27th Avenue is now an empty lot. Formerly, there were two very old houses there, set back from the road and enveloped in vegetation. Presumably, developers have their eyes on this location for some very boring and unesthetic homeboxes for this spot.

A pair of houses at Mill Road and Bay 44th Street.

Between Bay 43rd and 44th Streets, all pretense of a road drops away, as Mother Nature has long ago taken control of the road, which is still duly lit by the Department of Transportation, and the FDNY maintains a fire hydrant. 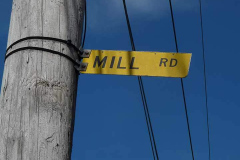 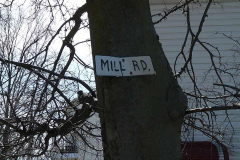 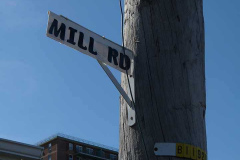 The Department of Transportation has rules, and one of them is that streets that are not on the city’s official maps do not get street signs. This leads to some strange situations because there are some streets on city maps that do not exist and have not existed for decades and yet are duly marked, such as Temple Street in southern Manhattan or Moylan Place in Manhattanville. And it also means that streets that are there, plain as the nose on your face, such as Mill Road and Sandhill Road/Bayshore Boulevard in Little Neck, get the shaft. Since the DOT won’t make up a sign, the Forgotten New York Sign Shop will do the job. Locals have set up some rough and ready homemade signs.

Even without the street signs to acknowledge their existence, though, the DOT does vouchsafe to light them with standard-issue NYC streetlamps.

Want to see what Mill Road looked like in 1940? The Municipal Archives can help; they at least show the houses, with a glimpse of the road, which was dirt then as now.

I had a business colleague, a doctor, with who I became friendly, who lived there. He invited me & my wife to spend New Year’s Eve 1989 with him & his family. It was quite a challenge finding his address in the dark so many years before GPS devices or even printable Bing Maps or Map Quest directions. My poor friend died suddenly in 1993; I went back to pay my respects accompanied by a mutual friend, this time in broad daylight but it was still a challenge for both of us.