CAROUSEL FOR ALL CHILDREN, Willowbrook Park

I fancy myself something of a connoisseur of carousels. Whenever I know one is around wherever I happen to be, I seek it out. I admire the calliope music (fie on the carousels that play regular pop hits), the workmanship, the painted horses and animals, the whole bit. Of course, I haven’t actually ridden on a carousel horse since I was a kid. I have my pride. 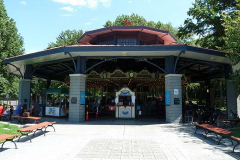 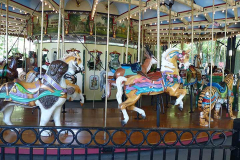 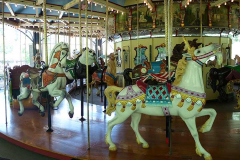 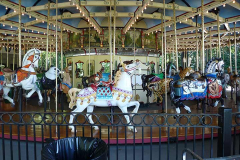 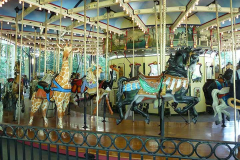 But the factor that really attracts me to carousels is that very often, carousels depict the histories of the regions they’re in. Today’s case in point is the Carousel For All Children in Willowbrook Park, on the far side of the lake. It’s not old as carousels go and was assembled from 1997-1999 by a company called Carousel Works in Mansfield, Ohio, which claimed this is their largest carousel. Unfortunately it filed for Chapter 11 bankruptcy in 2021, likely a pandemic victim.

Many carousels feature more than painted ponies and include other beasts, such as lions, bears and giraffes and the CFAC is one of those. But what I really pay attention to… 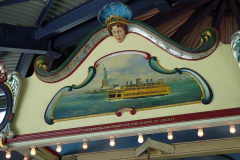 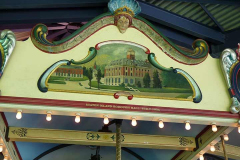 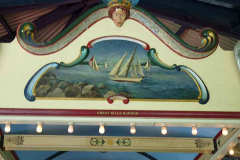 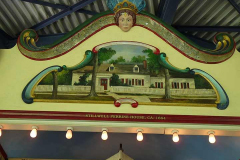 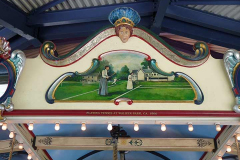 …the painted renderings of historic Staten Island scenes that include the Conference House, High Rock Park, the Tibetan Museum, the Vanderbilt Mausoleum, Stillwell-Perine House, Borough Hall and Horrmann Castle. The tennis players? No doubt a reference to Mary Ewing Outerbridge, who brought the game of lawn tennis to the United States from Bermuda. Mrs. Outerbridge, who made her home in New Brighton, unfortunately, died at the young age of 34. Her brother Eugenius was the first president of the Port Authority of New York and New Jersey and is the namesake of the Outerbridge Crossing.

The hell with pride. I’ll ride any carousel — any time, any where. I’m too old (and fat) to get on the horses anymore, but I’ll happily sit in a carriage and enjoy the music whilst slowly riding in a circle for two minutes.

As a Staten Island resident, I am happy to report that although the associated websites have apparently not been updated, the carousel in Willowbrook Park is open for rides Friday through Sunday, 11:00 am – 5:45 pm. I believe they will add Thursdays in July and August. Live a little, Kevin and take a ride next time.

I was surprised to see it closed, Are they going to open it up?