It had been awhile…perhaps since before the pandemic began in 2020…that I had been in Glendale. It’s a hike from any of the buses that run from the LIRR in Woodside, and of course has no subway of its own. However, on the 4th of July I was stir-crazy and before getting crazed from the heat, made my way from Hunters Point through Greenpoint through Williamsburg and then, with the aid of the M train, Ridgewood and then Glendale. 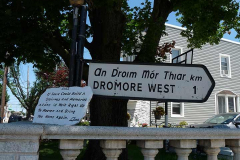 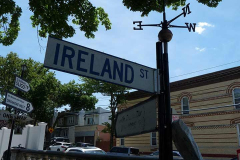 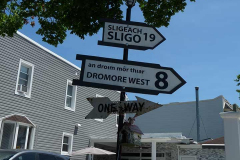 Apparently I had never been down this particular stretch of Cooper Avenue, one of Glendale’s main east-west drags along with Myrtle Avenue, because I would certainly had taken note of the signage on the corner residence at 64th Lane (street numbers tend to repeat in this part of Queens) because of the vintage blue and white Ireland Street sign mounted on a vane pole along with traditional directional signs found in Ireland. There’s also a die cut One Way sign that resembled the ones used in NYC until the 1960s, though those were usually inscribed “Police Department” as the NYPD was in charge of traffic control before the Department of Transportation was founded. The Ireland Street sign came from Woodside, which is where Ireland Street can be found in Queens.

Also curious is the references to Dromore West in County Sligo... 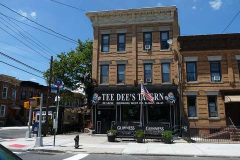 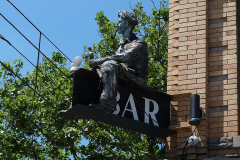 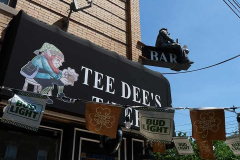 …which can also be found inscribed on the awning of Tee Dee’s Tavern a block away at Cooper Avenue and 64th Place. Thus, we can infer that Glendale is populated by a not unsubstantial number of immigrants from County Sligo in Ireland and more specifically, the town of Dromore West.

What baffles me is that I had never heard of Glendale being a hotbed of Irish immigration; Woodside yes, Woodlawn Heights in the Bronx yes, but not Glendale.

Comments are open if you know of any details about this circumstance.

Archie Bunker’s house is on Cooper Avenue as well, across from Saint John’s Cemetery.

I remember playing cards with T.D. himself and a few friends one late night nearby on 66th Street sometime in the early 80s, and T.D.’s brother was in my grade school class. Their family was Irish, and there were a good amount of Irish along with Germans and Italians around our part of Glendale.

I have an old NYPD traffic dept. patch.A embroidered horse’s head in the middle of
a wagon wheel,which makes me think the traffic dept. was started in the horse and
buggy days.

A “T.D.” (Teachta Dála) is the title of a member of Ireland’s parliament (such as my cousin Patrick, who is T.D. for South-Central Dublin). Alternatively (and perhaps more likely), the T.D. is someone’s initials.

T.D. is 100% someone’s initials in this case. I knew him and his siblings, we all went to the same grade school together.

It’s a local well-known family that has been very successful in their many business and real estate ventures. Each family member’s house has a Sligo and related street sign attached to it. If you walk around Liberty Park, you will find enough of them. I remember noticing the signs around 2003-2005ish. You can buy these signs online. Not saying that is where they got theirs; They may have gotten theirs from Ireland or handed down in the family. The name of their cleaning business is called Sligo. That may be where they get some of their vintage signs from. I have a relative with a cleaning business and that is where he gets his vintage items from, cleaning out estates, fire jobs, and the such.

There’s a new bartender at the Grandstand, Andrew from Sligo. Check it out.

And of course Cooper’s Ale House from “King of Queens” was also further down Cooper Ave. (It’s now a lawyer’s office, I think)

It’s the place to go if I ever find myself in Glendale… someday when the weather isn’t “feels like 100” and this covid thing has gone out of style. My father’s father was from County Sligo. Lots of Brennans there.

(probably off-topic) Hey Joe, are you the subway Joe from Columbia U? If so, thank you for your great historical information too!

There were two Irish-American families in Glendale amidst the German, Italian and Gottchee families: the Burkes and the Dolphins. There were a few Irish nuns at Saint Pancras but that was it. Oh, and there was Pat the bartender at Stammtisch. The Dolphins and Burkes shared an ancestral heritage but what they had most in common were their honorable, hard-working fathers – Eugene Dolphin and Gerard (Jerry) Burke. My Dad – Jerry – adored and respected the Dolphin gang – and for good reason. They were examples of the belief in working hard and the dignity of helping others. Bridget, especially, was good to my Dad. I will never forget what she did for my father in his later years at the Blue Gate and then Greenfields. God bless our parents – all in heaven now.

Indeed, growing up in Glendale in the ’60s it always seemed mostly German (my heritage) and increasingly Italian. It always puzzled me, going to St Pancras School, that their big fundraiser each year was the St Patrick’s night party and raffle every March 17th!

I live in Glendale until 1987. Went to PS 113 and JHS 119. Mostly German in those days. My mother was born in Germany. My dad was English, though. I now live in Arizona. When I tell people I grew up in Glendale, they think I’m a local.

Glendale, in 64 pl . Early years was alot of German families and basically still is. I still have family and ol d friends in that area. (UP THE HILL)…