In 1998, a demolition in Duffy Square allowed an ancient (ca. 1880) advertisement for horse and buggy carriages to come to light in the now-high tech, Disneyfied area. 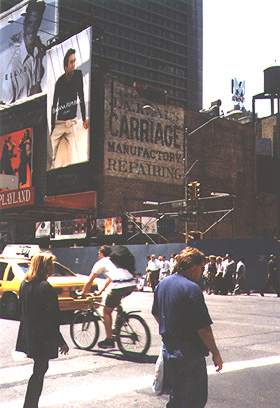 In 1998, passersby ignore recently revealed history on Broadway. The recent demolition of the Central Theatre, built in 1877, on the SW corner of Broadway and 47th Street revealed this absolutely ancient ad for carriages, as in horse- and- buggy carriages. The ad reads: “J.A. Keal’s Carriage Manufactory Repairing.”

It stood there like a ghost, as if to mock the high tech/neon ads that currently decorate the Great White Way. 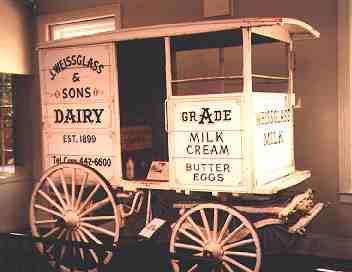 By the way, this is the kind of carriage we’re talking about here (from the Staten Island Historical Society Museum, Richmondtown.) 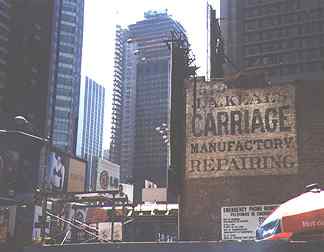 The contrast between advertising techniques of the 1880s and 1990s is striking. Keal’s ad was painted there in the era of gaslights, when the auto was yet to be invented and horses were still the prime means of transportation.

Modes of propriety have changed as well. What would J.A. Keal have thought of the 15-foot-tall women’s underwear advertisement across the street from his sign?

The ad most likely dates from the mid-1880s; the building it’s on is rather older, and is possibly the oldest building remaining in the Times Square area. It’s mind-boggling to consider the changes that have happened to Broadway, and the Times Square area, since this sign was first painted. Did Keal ever think that his ad would be covered up for decades, only to make a brief “return engagement” in the late 1990s? What was Broadway like when the sign first went up? As it happens, we have some idea… 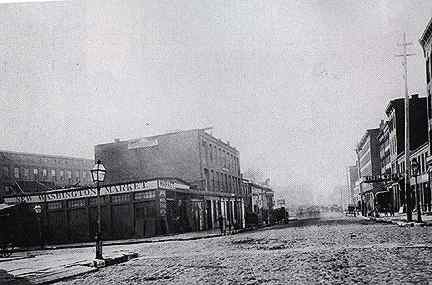 The above picture shows Broadway, looking north from 47th Street in 1878 … the same corner as in the modern view, but from a different angle. The streets are not paved, and there are still gaslamps. The New Washington Market, at left, was a northern arm of the larger and older Washington Market in lower Manhattan (which was eliminated by the construction of the World Trade Center in the late 1960s). The site of the New Washington Market is today occupied by the TKTS booth, where discount tickets for Broadway shows can be obtained.

In this long-distant era, this section of Manhattan was the city’s carriage-trade center, and the confluence of Broadway and 7th Avenue was then known as Longacre Square–Longacre being the carriage center in London. In a couple of decades, theaters would begin moving into the Longacre Square area from their old center at Union Square, and the carriage trade would greatly suffer from the advent of the “horseless carriage.”

The building just behind the telephone pole, at right, is likely the same one where J.A. Keal would open his own carriage “manufactory”, and paint his sign, which remains there today. 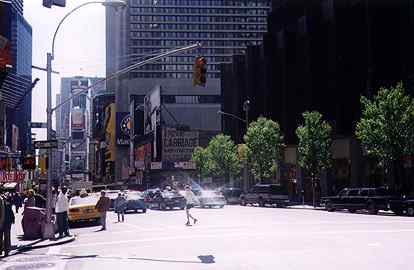 Today, over 120 years later, the scene has drastically changed. But J.A. Keal’s ad is still there, reminding us of what Broadway was once like. What will the Great White Way be like 120 years from now? Probably about as different from the above photo as it is from the Broadway of 1878! Construction of a modern restaurant has now obscured the Keal’s ad again, so it will probably remain readable until the day when the new building has a date with the wrecking ball. 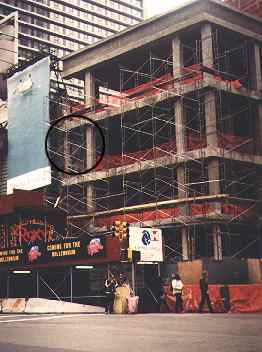 The framework for the new restaurant has nearly completely obscured the old carriage ad (circled).

J.A. Keal’s ad will again emerge to amaze the Futurama world of 70 or 80 years hence when the new place is finally condemned, unless its own building goes first.