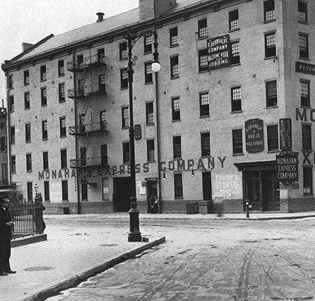 Appearing to be a hybrid of the bishop’s crooks and long-armed poles, these distinctive lamps originally found a home on Seventh Avenue, though today they’re generally used for decorative effect in bridges and parks.

In the castiron lamppost era, Seventh Avenue boasted its own design, a sort of intermediate one between the Bishops Crook and Long-armed designs. Later, shortened versions of the Seventh Avenue pole were used for side streets. A few of these castiron poles survive to the present day (see below). Strangely, until the early 1980s Rockaway Boulevard alongside Kennedy Airport was outfitted with a large amount of these quaint poles, as smaller size poles are used near airport runways.

The photo at left was taken in 1912 and depicts the southern terminus of Seventh Avenue at Greenwich Avenue, with one of the distinctive Seventh Avenue poles on the corner. Beginning the following year, the building in the foreground was torn down so the IRT subway could be extended south. Seventh Avenue was extended south to Varick Street and Clarkson Street along with the construction of the subway. This site is now occupied by Mulry Square.

“Seventh Avenue” poles, and other castiron NYC lampposts, are classified by catalog. In 1934, the NYC Bureau Of Gas and Electricity (which like today’s Department of Transportation) was responsible for streetlighting) published The System Electric Companies: Photographs of Street Lighting Equipment As Of November 1, 1934. The pamphlet gave code numbers to every type of streetlight in NYC, identifying 76 types! Of those 76, only 19 have representative samples today.

The pamphlet refers to these poles as “Type F” poles.

Two views of a “Seventh Avenue” survivor. This one is on West 13th Street between 6th and 7th Avenues. It was outfitted with an incandescent “cup light” most likely during the 1940s.

There are ‘Seventh Avenue’ Type Fs at a rather forlorn area in Bensonhurst, on the walkway over the Belt Parkway at 27th Avenue. The walkway leads to Calvert Vaux Park…in reality, a lot of fenced-off weeds. The poles have been given a garish blue paint job.

A replica of a “Seventh Avenue” castiron graces a driveway in Flushing, New York. It could very well be a vintage post that was salvaged. It boasts the distinctive white “acorn lamp” that was most popular from the Twenties into the Forties. 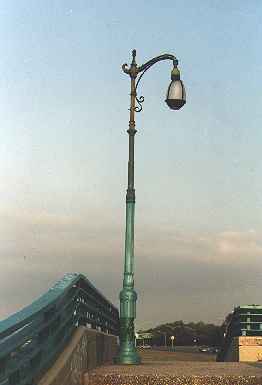 The Belt Parkway pedestrian crossing south of Bay 8th Street had the ignominy of having a park luminaire unceremoniously attached to it upside down. It has since been given a sodium bucket light. 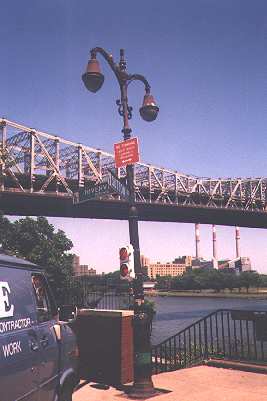 East 58th Street and Riverview Terrace boast both a magnificent view of the Queensboro Bridge and of a 1910s-vintage “Seventh Avenue” twinlamper.

This view inspired the poster for Woody Allen’s 1978 film Manhattan.

The Department of Transportation has replaced this pole with a copycat modern bishop crook lamppost. 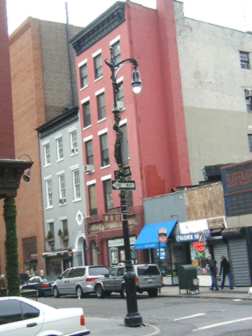 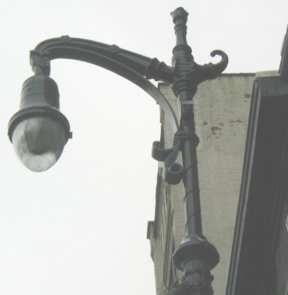 Fall 2001: The Village Alliance, a business improvement district,has installed retro-7th Avenue lamps, complete with neo-Bell luminaires. These Bells have been given deep versions of the reflector glass bowls. Bedford Street in Greenwich Village and Wyckoff Avenue in Bushwick/Ridgewood have since also gotten them.

The DOT rehabbed this Type F original in Ridgewood Gardens, Maspeth, Queens in the 1990s.

This magnificent Twin Type F was found in SUNY Maritime College Campus in Throgs Neck in 2005. It has since been scrapped.