You say that there haven’t been any trolleys on the streets of Brooklyn since the late 1950s? Don’t tell Robert Diamond, the man who discovered the ancient Long Island Railroad tunnel underneath Atlantic Avenue in 1980 . Since then, Diamond has been trying to inaugurate a trolley line that would extend through the long-abandoned tunnel along the Brooklyn waterfront, and has assembled the Brooklyn Trolley Museum on a wharf in Red Hook, Brooklyn.

Diamond had acquired an 1890s trolley car built by a German company which had run in the streets of Oslo, Norway for decades, actually ran it on some tracks that still exist on Plymouth Street on the Brooklyn waterfront in the summer of 1989. If you used your imagination, it actually felt like what it must have been when trolleys, not cars, ruled the roads.

Forgotten Fan JJ Earl, who was there that day, recalls his experiences:

As a member of BERA, I donned my uniform on that fine day in 1989 and presented myself to Bob Diamond, asking him if I might be able to operate his car once.

He surprised me by allowing me to run the car for most of the afternoon because he would be busy with other matters. The car may been originally pulled to the starting point by automobile, but for public operation, power was supplied by a cable from a generator truck and held in place by two employees of Brooklyn Union Gas Co. This service was donated by BUG and allowed me to operate this car (at walking speed) by use of the controller just as though it were useing overhead power. 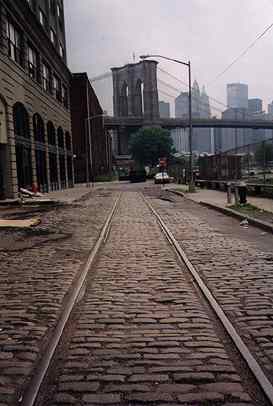 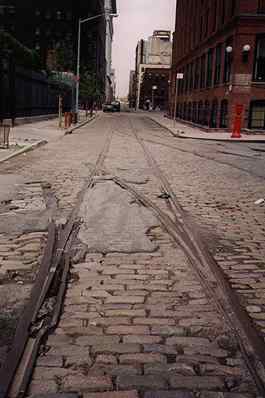 These tracks along Plymouth Street east of Main on the were never used for trolley service. Rather, they served freight traffic on the Brooklyn waterfront as part of the Jay Street Connecting Railroad. 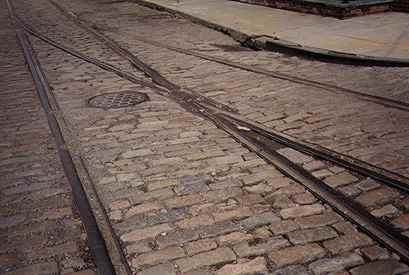 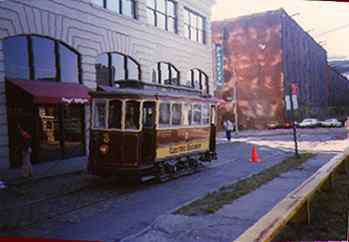 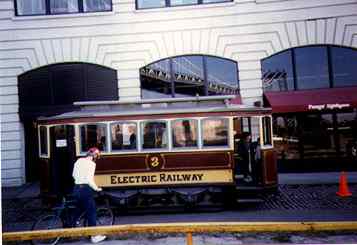 Robert Diamond’s trolley car, in place on the Plymouth Street tracks in the summer of 1989. The Manhattan Bridge is reflected in the restaurant window. 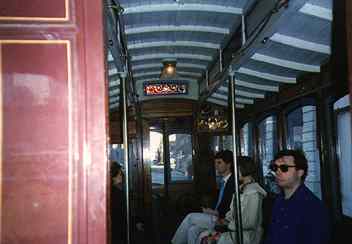 Interior of the trolley, showing detailed wood and glasswork.