Delancey Street, on the Lower East Side, is a repository of elderly, fading advertisements from bygone eras.

Sharp-eyed observers will see this ad for Gold Medal Flour on this building set back from Delancey. I can’t quite make out the script writing above the sign, which has been weathered into illegibility. 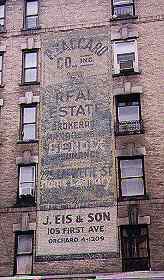 Sometimes two ads will be placed on the same spot, and eventual weathering condemns them to fade away together. Probably the first ad on this site was the one for Bendix Home Laundry, on Kenmare near the Bowery, and it was later that P. Zaccaro’s real estate office painted over the ad.

Now they are going to slowly fade together in the 21st Century. 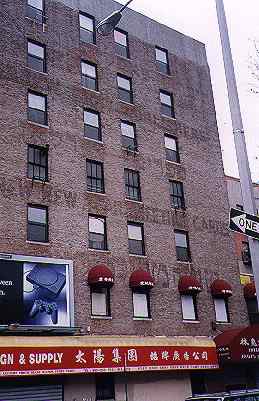 It’s hard to read after at least five decades, but this Hebrew greeting card company is part of a three-language triptych on this building at the corner of Pike and Delancey, joining with a new Chinese-language supply store. 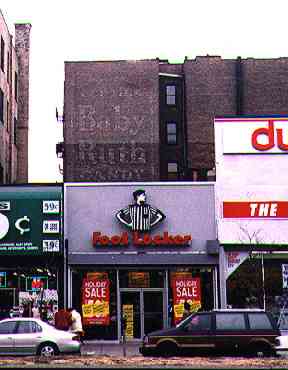 The candy bar was named almost 25 years after the child’s death. Some have remarked that if a similar practice happened today we’d be naming products for President Kennedy’s son Patrick, who died in infancy. But, they did things differently back in those days.

It was the candy bar’s great good fortune, though, for the chocolate/ peanut/ caramel concoction to come along just when Babe Ruth was the biggest sports star in the country, back in the 1920s.

Years later, another Yankee, Reggie Jackson, fulfilled a self-prophecy when a candy bar was named for him.

In the late 2000s, the ad was covered by new construction.