The familiar red fire alarm box that has been a fixture on every other street corner in New York City is being phased out, with many of them being disconnected in many neighborhoods. The city has decided that calling 911 on a cellphone is the best response when a fire breaks out. The Fire Department of New York has complained that over 90% of the calls they receive from the fire boxes are false alarms. The removal or deactivation of fire alarms has continued apace. There were, when this page was written in 1999, a total of approximately 4400 remaining pull boxes (see below) and 9060 Emergency Rescue Service boxes (the ones with the buttons to contact the FDNY or the NYPD). None of the older pull boxes remain in Manhattan or the Bronx.

It’s interesting to note, though, that many fire alarms, and the lights that mark their presence, are functional “living fossils” as far as ‘street furniture’ goes. Many of the fixtures were installed in the first few years of this century. A typical fire alarm box with a handle. Every manual pull box sends a coded signal of the box number to the Central Office in the boro in which the box is located; then the dispatchers send the alarm to the appropriate firehouse. More recent models (Emergency Rescue Service) feature a speaker in which the caller can alert police or firemen. Some of the pull boxes have been in use since 1870 and, with modifications, are still in use today. 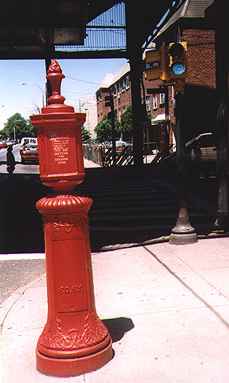 This is the prototypical NYC fire alarm, that has a lit torch sculpture at its apex that I always thought resembled a red ice cream cone, on Liberty Avenue in Ozone Park

A rare two-light NYC stoplight is in the background. These were made by the Ruleta Company in the early 20th Century. The stoplight has since been replaced. 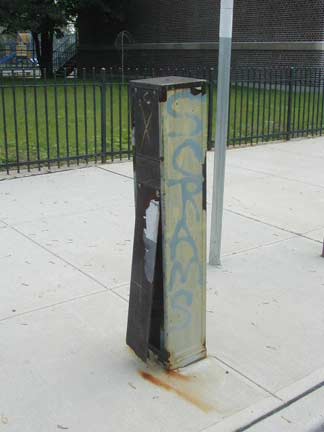 This is the boxier 1960s fire box design.Since it was abandoned by the city, it was a target for local youth. 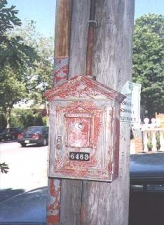 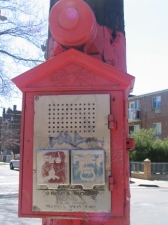 While most standalone fire alarm boxes in NYC boast either a decorative torch at their apexes that resembles an ice cream cone, or are rectangular in shape, there are exceptions produced by the Gamewell Company that have peaked tops. a few of these are still around in Queens. 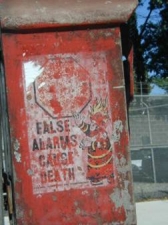 This is a standard issue fire box in Auburndale, Queens, but it’s got a very old public service ad on it. How old? Well, it’s signed Edward Thompson, Fire Commissioner (invisible on this scan.) Thompson was in office between 1962 and 1965. Foxy The Firefighter (found in Rosedale) probably came along a little later than the 1965 ad. 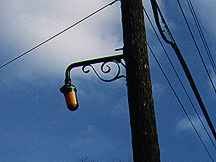 Over the years, the city has devised several methods to mark fire alarm boxes. In the early years, beginning in the 1910s, boxes were marked by large, orange globe-shaped diffusers, made of glass at the start and then plastic later on. They could be installed on the shafts of cast iron lampposts or on the arms of lights hung from utility poles. They could also be mounted directly on top of the main diffuser.

This became impractical, though, when mercury bulbs appeared and new diffusers started appearing in the early Sixties. The shape of the fire alarm diffuser changed from a globe to the tube-shaped object shown above. As a rule, the new fire alarm lamps were mounted on short, simple curved bars that were attached to the utility pole or lamppost shaft.

In certain sections of the city, however, the cast-iron arms shown above were retained to carry the fire alarm lights. These arms, with their distinctive ironwork, were originally used to carry street lighting on side streets in the days when a single incandescent bulb was needed to light the street, in the early part of this century. The one on top is the one most commonly seen, but the one below, which looks like its little brother, is much rarer. 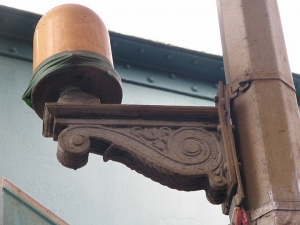 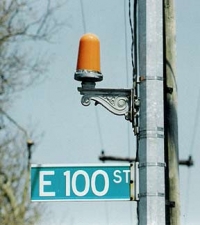 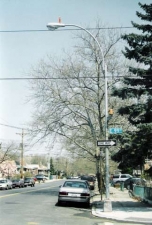 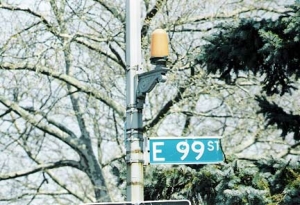 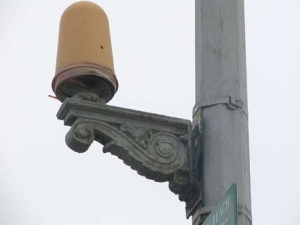 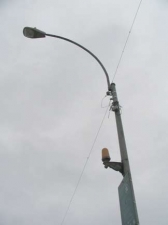 Some of the streetlamps  around town, in Coney Island, Borough Park and Canarsie feature an unusual combination. The bracket holding the fire alarm light at the right was generally used to hold the light on cast iron poles in the early part of the century when the bulb was globe-shaped. For whatever reason, a couple of them have wound up on the modern aluminum poles on the boardwalk.

(The ones at Coney Island have been replaced) 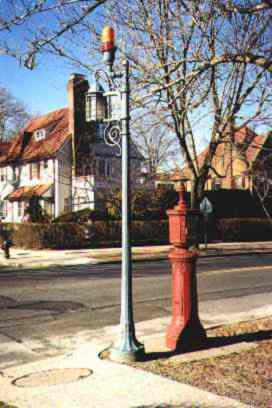 This specialized lamppost, used only in the private Forest Hills neighborhood of Queens, wears an orange fire alarm light. This is the only such pole I’ve seen. 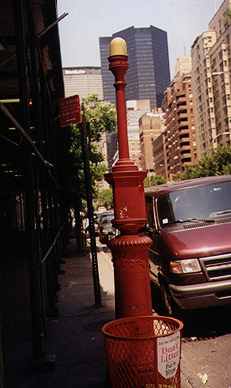 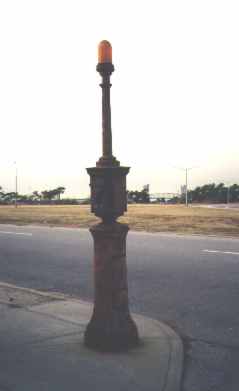 The above two fire alarms, at Park and 34th (left) and Riis Park, Queens (right) are unusual in that they carry their own orange fire alarm lights. This used to be a rather more common arrangement, but it was found more convenient to mount them on lampposts and telephone poles instead. In 2003 a new species of fire alarm light began to appear. They fastened to the top of the luminaire and glowed red both night and day. The City is phasing out the old orange cylinder lights. This post still has both varieties. 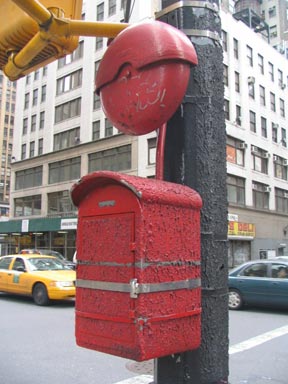 This now-disused alarm on 8th Avenue had a bell or klaxon attached. The pole has been stucco-painted to discourage note-pasters and graffitists. In the early 20th Century fire alarm posts were often attached to the bases of lampposts. Note the old wide fire hydrant; this type was phased out in the 1990s. photo: Bob Mulero 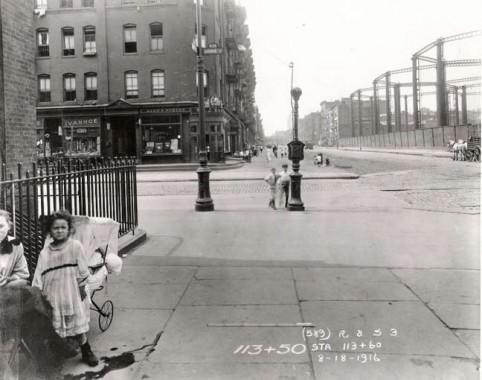 This 1916 photo taken on Avenue C shows an old-style fire alarm with a lamp affixed on the top post.

SYLVAN, the cemetery at the end of the Island

[…] call boxes come in different shapes and sizes, representative of the decade during which they were installed. Most common are the stand alone […]

Thank you for the info on alarms and Foxy..

I owned both one of the tall alarm posts with the torch on top, and one one the round top models strapped to the light poles, it’s a shame that so many of those tall historic models with the torch have been ruined or so badly altered by gutting the original spring-wound mechanical brass mechanisms and doors in the 70s to replace them with that stupid police/fire intercom thing.
I see very few left that even have their original doors with the lift up guard.
The one pictured attached to one of the old Bishops’ crook style lamp posts is very rare, I’ve only seen a couple or three of those sort of “Federal” or “chipendael” style boxes,one was down around Warren st.
These boxes were made especially for NYC unlike the majority of cities which had Gamewell systems, that made the NYC very rare and unique. On a rare occasion some of these items come up for auction or on ebay, just one of the aluminum DOORS with the lift up guard from one of the boxes that are strapped to light poles sold for over $300.
I bought a complete one of these boxes for $600 and I was surprised to get it so low as I have seen bidding wars on the very few that come up for sale when collectors sell off or die- go for over $1,000

The big torch top style boxes are made of cast iron an inch thick in two halves and weigh a little over 900#, I’ve only seen a couple of them ever come up for sale in the last decade, and they went for several thousand dollars each, but they were at least complete.
I’ve also seen just one of the broken-off torches for sale on Ebay go for a ridiculous several hundred dollars.
Despite the devastation to these antiques and missing parts, they are by no means junk or something the city should SCRAP! Even parts off them are worth a considerable amount of money, far more than scrap.

I have an old Gamewell fire box that says “The Gamewell Co. New York” at the bottom of the door and it’s number is 361. It says “For fire break the glass open the door pull hook sown once and let go” with a little red box with a pat # on it etc. The glass is gone but… My dad mounted it onto an old Goodyear tire of canada tire post (very heavy) and at the top he put an old railway lamp with green, red and yellow lights. What would something like this be worth?

I just purchased an old fire box off e-bay. The manufacturer is Horni. The seller stated that he bought it “20 some” years ago from a retired NYC utilities worker. This worker told him that it came from somewhere I Brooklyn. All of the interior workings still function when wound up and triggered. You can here the code for the number of the box being tapped or when it runs. The number is 126 clearly audible on the telegraph mechanism. I looked up this box in a FDNY database and it gave three different corners for this number, one in Brooklyn, one in Queens and one in Manhattan. I google mapped each one and could see a 360 degree view of each corner. All three seem to have the call boxes that have the rounded tops which I’m assuming are newer models maybe? My box is rectangular with a pitched roof on top and a hinged door with a glass window that lifts up and a hook to pull down on which activates the telegraph mechanism. Anyway I am just interested in finding out all that I can on the history of my box. It’s in great shape for it’s age and use. I’m sure it was refurbished at some point in its retired life. Anything you can tell me would be treasured. Thank you !

Thanks so much for all your work and the fire alarm box info. The work you do makes walking the streets of NYC a whole lot more fun.

WHERE I LIVE IN STATEN ISLAND NYC GREAT KILLS THERE ARE STILL QUITE A FEW LIFT UP PULL DOWN FIRE ALM BOXES LEFT THAT JUST TRANSMIT SIGNALOF POSS FIRE TO HDQRS FOR THE S I BORO THERE IS NO PERSONAL COMMUNICATION, THATS WHY THEY ARE BEING REPLACED ALBEIT IN SLOW MOTION TO VOICE ACTIVATED REQUEST/RESPOND BOXES WHICHALSO INCLLUDE THE POLICE.

HAVE NUMEROUS OLD STYLE BOXES LIFT UP PULLL DOWN ALM JUST SIGNAL NO COMMUNICation S QITH FIRE/POLICE BIXES COMBO. UNITS RESPOND OR NOT ITS TOSS UP ON THESE KINDS OF BOXES LIKE INOLD DAYS, THESE BOXES ADDED TO FALSE ALMSIN FIRE YEARS OF 1970S AS PULL ALM RUNAWAY AND UNITS WILL RESPOND MAYBE? IT WAS THE DFIRE YEARSS IN NYC YOU KNOW? ALL ALM BOXES AND FIRE BOX LTS SHOLD BE REMOVED ANYHOW AS WITH CELLL OHONE PROLIFIRATION AND OTHER FORM OF ELECTRONIC COMMUNICATION THESE DAYS DAYS OF FIRE ALM BOXES AND BOX INDICATROLTS ENDED ALONG AGO.

Has anyone come upon a globe for those fire alarm lights? I just recently acquired the bracket and fixture base. I’d like to make it complete if I can.