Quick, what’s the oldest bridge in New York City that connects two boroughs? Most people would say it’s Brooklyn Bridge, which was finished in 1883. Actually, there’s a bridge 200 blocks north of it that’s almost 40 years older. 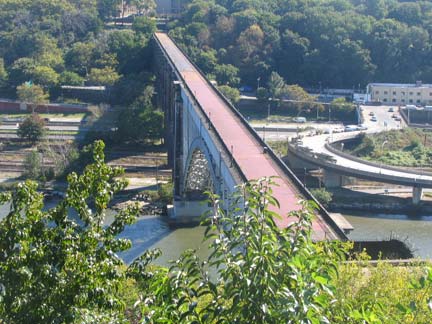 High Bridge, which connects High Bridge Park near West 174th Street, Manhattan, and West170th Street in the Bronx, is the oldest bridge connecting two boroughs. When it was built between 1837 and 1848 it actually connected two separate towns, since that area of the mainland would not become a part of New York County until 1874 (and the Bronx would not become a separate county until 1914!)

High Bridge was built as a conduit to bring the City water form the Croton Aqueduct. Originally, High Bridge featured massive stone arches (like Roman aqueducts had) for its entire length. The arches survive on the Bronx side, but the steel span was constructed in the 20s to allow navigation on the Harlem River. 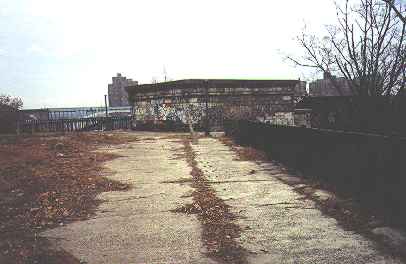 High Bridge has featured a walkway since the 1860s, although it never had roads for auto or horse traffic. But in 1960, the walkway was closed, never to again reopen, because of local knuckleheads throwing objects from the bridge onto Circle Line boats in the Harlem River.

High Bridge itself has been closed to pedestrian traffic (it has never carried a roadway for motor vehicles) since 1960. In recent years, High Bridge Park (on the Manhattan side at Amsterdam Avenue and West 174th Street) has been spruced up by New York Restoration, a group spearheaded by Bette Midler, the Divine Miss M herself.

There have been various plans and schemes to reopen the High Bridge for pedestrians over the years, but none has seen any fruition.

Above, we see the pathway that leads to the now-closed High Bridge walkway in 1999. 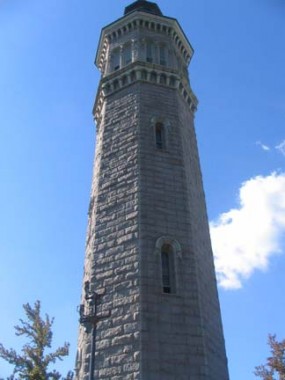 The High Bridge Water Tower, built in 1872, was originally used to equalize water pressure from the Croton Aqueduct.

Some fine views of Manhattan and The Bronx can be had from the top of the tower. 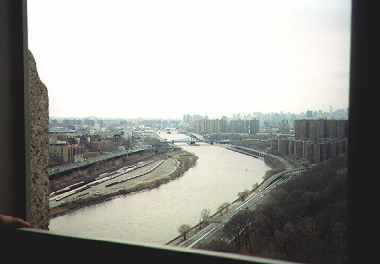 Looking south, from the top of High Bridge Tower, on the Harlem River. Periodically, park rangers open the tower to the public. A spiral staircase leads from the ground floor to the top of the tower. 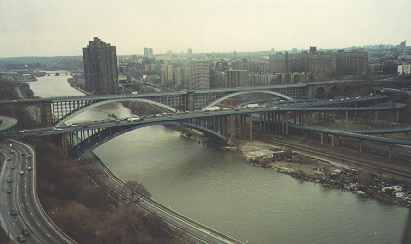 Alexander Hamilton’s home, The Grange, is about thirty blocks south of High Bridge. George Washington made his headquarters during the Revolution at the nearby Morris-Jumel Mansion. 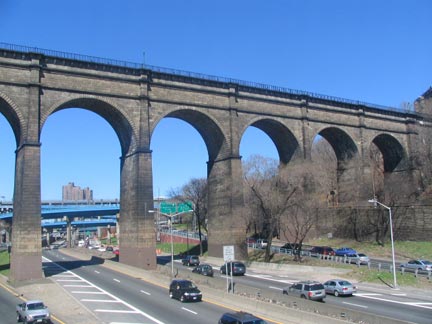 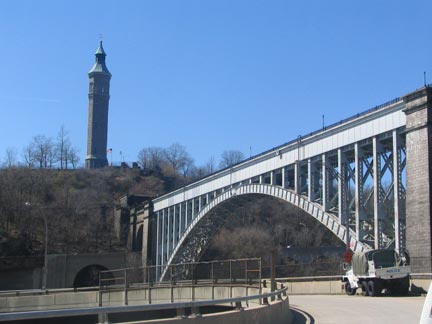 I finally got to High Bridge on a sunny day in 2004. The best views are from Depot Place just south of the bridge.

A Forgotten Fan sent these two images of High Bridge drawn in the 1800s: Ferry landing by the High Bridge. The High Bridge Tower and pumping station can be seen on the opposite bank of the Harlem River. (Harper’s Weekly, 1880).

Historic illustration of the High Bridge over the Harlem River, just prior to its completion. Manhattan Island is at left, “The Continent of America” at right (Schramke, 1846).

8/1/04: We’re very lucky to have gotten a number of shots from the High Bridge walkway itself, courtesy of Mike Epstein; the photos were shot by Moses Gates. 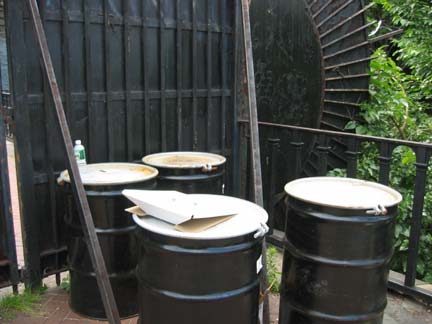 Barrels stored inside the gate in the Bronx side. 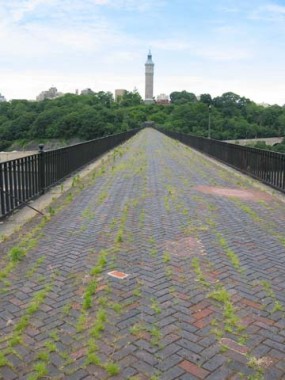 High Bridge Tower as seen from the Bronx side. 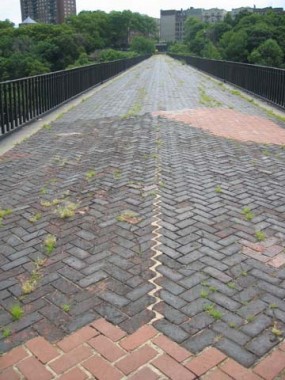 Looking toward the Bronx side, you can see where some of the walkway bricks have been replaced. 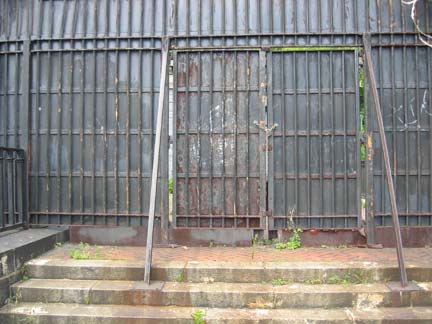 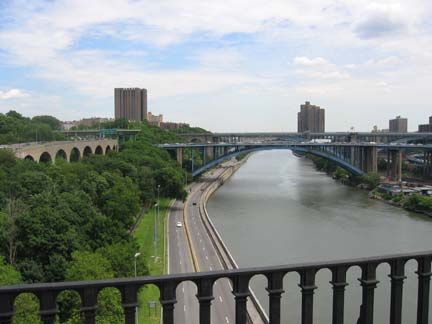 Harlem River with the Alexander Hamilton traffic bridge in the foreground 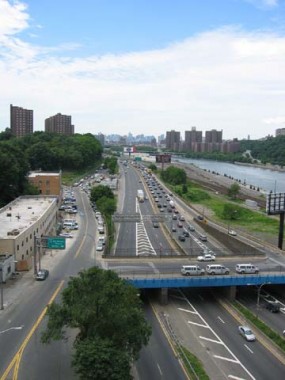 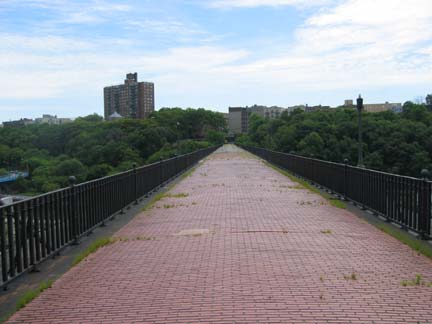 Looking toward the Bronx from Manhattan 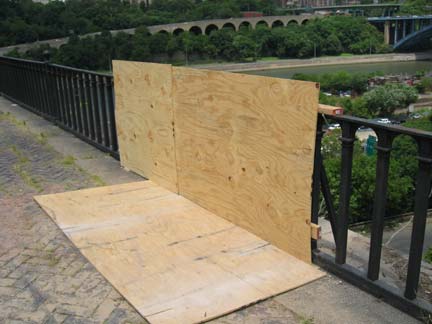 Above two: the iron fence has been shored up with plywood in spots A sample of some decorative ironwork, fence, Bronx side Other travelers preceded Mike and Moses. 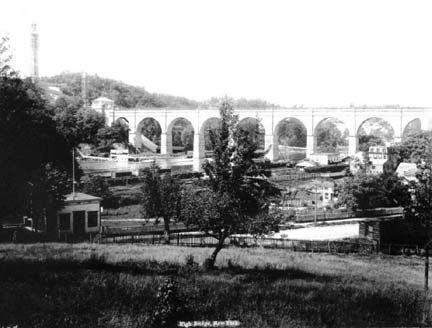 High Bridge in an early view. A rower nears the Manhattan side south of High Bridge.

Kids, it’s illegal to walk the High Bridge at present, so don’t tell the cops I sent you.

2013: High Bridge is finally under renovation and is scheduled to reopen sometime in 2013, though typically, these schedules are pushed back as money and conditions warrant.

[…] tower of “Dr. Shrinker,” which was an ABC TV show in 1976, (the tower itself was actually the High Bridge Water Tower, built in 1872, for the Croton Aqueduct), and through the borough of Brooklyn to the neighborhood of […]

[…] fell into decay before closing due to this lack of interest,” said a Parks spokesperson. Rumours that the bridge was closed because of people throwing stones off it at passing ferries are just […]