Jumel Terrace in Washington Heights is not only the home of some pristine NYC Belgian bricks, and is the former home of actor/singer/activist Paul Robeson, but is also dominated by the Morris-Jumel Mansion, where Washington made his headquarters when he was leading revolutionary forces in northern Manhattan in the Battle Of Harlem Heights. 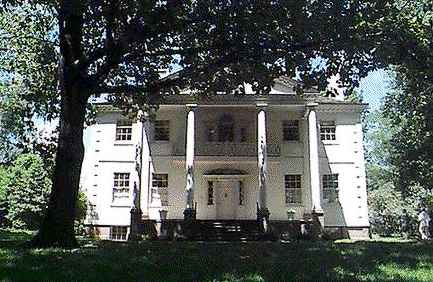 Built by Roger Morris, the mansion was bought by French wine merchant Stephen Jumel (pronounced zhoo-MELL) in 1810 for his wife, Elizabeth “Betsey” Bowen, who was rumored to be a former madam and prostitute (the Jumels were never accepted in society because of this.) After Stephen Jumel died, Madame Bowen married the notorious Aaron Burr, who had killed Alexander Hamilton in a duel in Weehawken, New Jersey in 1804, but that marriage was unsuccessful and she sued him for divorce two years later. After her own death in 1865, her ghost is rumored to still be presiding over the mansion! 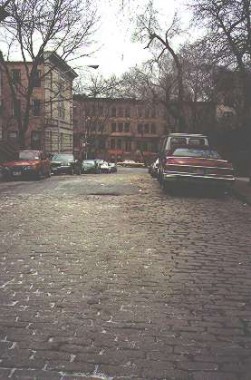 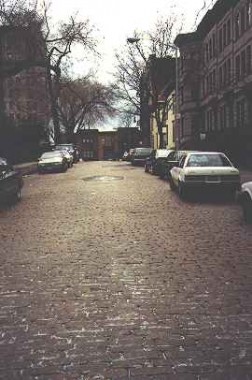 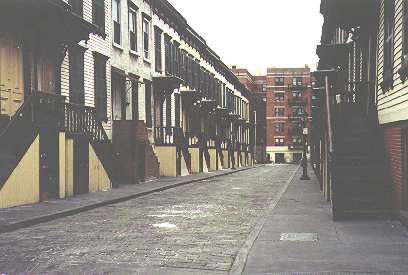 One of Manhattan’s most notable historic districts is a one-block street full of well-preserved row houses built in 1882 in the heart of Harlem, Sylvan Terrace.

Sylvan Terrace looks pretty much as it did in 1882, when it was constructed, complete with Belgian stones.