What can a piano bar named Marie’s Crisis on Grove Street in Greenwich Village possibly have to do with Thomas Paine, the revolutionary rabble-rousing pamphleteer? Plenty, as it turns out.

Marie’s Crisis is named for Thomas Paine’s 1776 pamphlet, “The Crisis”, which followed up on the themes of his earlier “Common Sense” which laid out, in logical terms, why America had to break from England. (“Marie” is Romany Marie, who was the proprietor of several tearooms in Greenwich Village in early 1900s.) 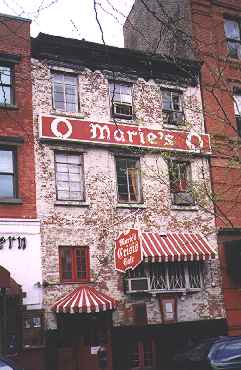 Paine died here in 1809. No, he didn’t die in Marie’s Crisis..it hasn’t been around quite that long…but in a small wood framed house that had been on this site before the brick building that presently occupies the site was constructed.

Born in Thetford, England, in 1737, Paine tried and failed at many professions, including schoolteacher, grocer, tobacconist and corset maker. Emigrating to America in 1774 after making the acquaintance of Benjamin Franklin, he became the editor of the Pennsylvania Magazine after settling in the Philadelphia area. There, he wrote Common Sense, which became a riotous success, selling 500,000 copies when the population of the 13 colonies was but 3 million. Paine was a writer of such persuasive power that Thomas Jefferson, who composed the Declaration of Independence, praised him as the only writer in America who could write better than himself.

After the American Revolution, Paine moved to France and after their 1789 Revolution, helped draft the Declaration of the Rights of Man and Citizen as well as their Constitution. He was even elected to the French Convention with the relatively moderate Girondin Party, but after the rise of the Jacobins and subsequent Reign of Terror, Paine quickly fell to disfavor among the revolutionaries by arguing against the execution of Louis XVI. Paine was spared from the guillotine by pure dumb luck: because of an illness, he needed air and his cell door was left open, concealing the chalk mark that  designated a condemned inmate. He was later released after a request to the revolutionary government by future President James Monroe.

Paine sounds like a modern Democrat in his ideas of progressive taxation and opposition to establishment of a state religion. His Age of Reason, drafted in the French prison, irritated many religious Americans who believed him to be an atheist; making his home in New Rochelle, NY after returning to America, he found himself somewhat of an outcast. In 1806 he moved to New York City, residing on Church, Herring (now Bleecker) and finally, Grove Streets. He lived at 59 Grove for only about a month before his death in 1809. He was buried at his farm in New Rochelle, but the bones were eventually dug up and moved to London by political activists (Paine had no heirs to prevent such a thing). No one now knows where Thomas Paine is buried. 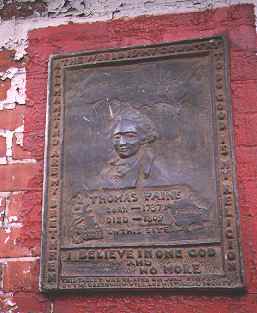 In 1923, the Greenwich Village Historical Society installed this plaque at 59 Grove commemorating the revolutionary.

For a time, Barrow Street between Bleecker and Bedford was named Reason Street after the Age of Reason, but the locals mispronounced it “Raisin” and it was changed to Barrow, to match the remaining length of the street, in 1828.

[…] piano bar with a heart of gold at a location with deep roots read more.  Marie’s Crisis you’re on our list for next […]

Nice write up. Only error is that the Marie is not from Romany Marie. Romany did own a tea room a few doors down. It was Marie Dumont who opened and ran this establishment. The Marie is for Marie Dumont.