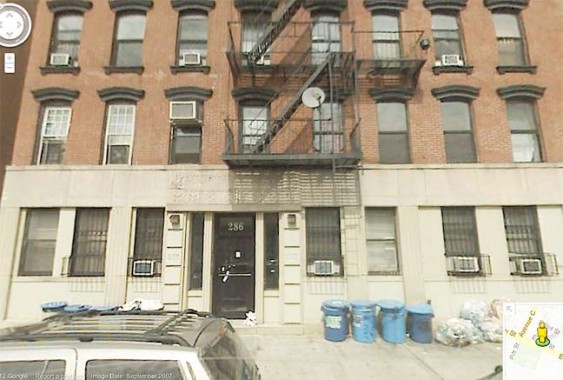 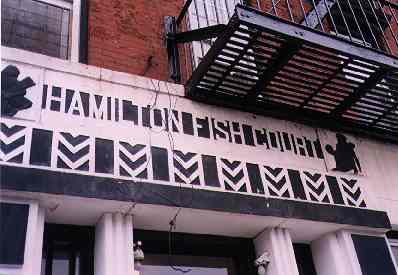 What in the world can a “Hamilton Fish Court” possibly be? What is a “fish court” and why is it named for Hamilton?

Actually this apartment building, at 286th East 2nd Street between Avenues C and D, has nothing to do with either fish or Alexander Hamilton.

It does, however, refer to Hamilton Fish, a governor of New York State in the 1800s.

(The top photo from Google Street View is from 2010; the bottom, when the words were easier to pick out, is from 1998) 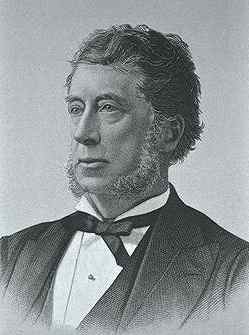 From the Microsoft Encarta entry on Hamilton Fish:

Fish, Hamilton (1808-93), American lawyer and statesman, son of Nicholas Fish, a New York City alderman, born in New York, and educated at Columbia College (now Columbia University). He was admitted to the bar in 1830. Fish served as a member of the U.S. House of Representatives (1843-45), as the governor of New York State (1849-51), and as a U.S. senator (1851-57). He is most noted for his service as secretary of state (1869-77) under President Ulysses S. Grant, especially for his handling of disputes with Great Britain and Spain. When the Treaty of Washington was drawn up in 1871 to settle the disputes that arose between the United States and Great Britain during the American Civil War, Fish took an active part in arranging for the arbitration of the Alabama claims. Later he was instrumental in finding a solution to the San Juan boundary dispute with England, which was settled in 1872. During the Cuban insurrection against Spain, which dominated Cuban political life in the late 19th century, Fish was largely responsible for the recognition by the U.S. of the insurrectionists.

Fish Avenue in the Eastchester section of the Bronx is named for him. 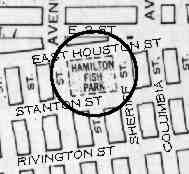 This 1939 map of the Lower East side shows Hamilton Fish Park.

Most of the streets here, except for Columbia and the streets north of East Houston, have been swallowed up by housing projects. 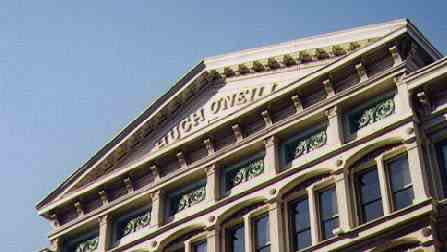 Who is Hugh O’Neill, and why is his name on this building high above Sixth Avenue and 22nd Street? 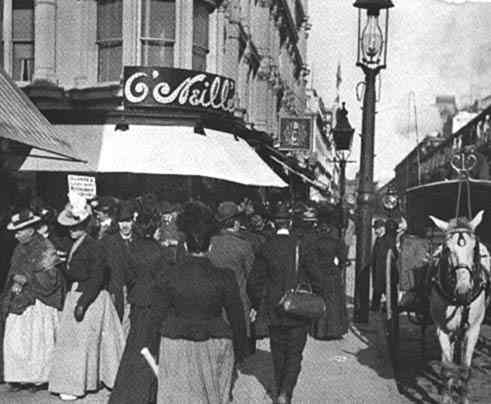 Back in the good old days, circa 1900, Hugh O’Neill owned the building, and the store on the ground floor. Just about everything here has been changed in some way, except the building. Formerly it was part of the so-called Ladies Mile strip along Sixth Avenue in the 20s, featuring department and dry-goods stores. Note the Sixth Avenue El at right, which was there until the IND subway under 6th Avenue made it redundant in the 1930s.

In those days, everybody wore a hat.

Of late, Ladies Mile has made a comeback of sorts, as Bed, Bath & Beyond, Old Navy, and other retailers have made Sixth Avenue a shoppers’ row once again.

To Whom It May Concern ~

I have just completed an in-depth study of the life and times of Confederate Arms and Supply Purchaser, Caleb Huse, entitled: “Dancing with the Philistines.” And, as with all of my tome-studies, I attempt to include as many as possible B/W images of individuals that were even remotely connected with the protagonist.

For further information, pertaining to the books I have finished researching, as well as the ones that are in various stages of completion, please see: http://www.davestevensbooks.com.

That said, my publisher has requested I ascertain that it is agreeable with the originators of the images that I wish to include – to wit: written authorization to include, for publication, an image that has been ascribed to you – before the stages of publication can proceed.

Let me say, however, that although my books appear on the www, my “following” is incredibly-small (mostly patronized by “friends, family, and associates”), resulting in less than 100 copies sold (and, OF those, I have given most away!). So, any ‘profit-margin’ that I would have liked to realize is, indeed, very, very miniscule (i.e.: I have never “broken-even” on any of my previous research, i.e.: “Sin Perdon: Acquiescence with Murder,” 2008).

Having said all that, I am approaching you with the petition that I be authorized (granted written permission) to include a photograph, that has been ascribed to you, in the publication of the abovementioned tome. Quite naturally, all copyright descriptions and/or authorizations will be properly annotated either directly below the image (i.e.: “Courtesy of [your organization / name]”), or in the footnote section (unless otherwise dictated by you).

The B/W image in question is that of Hamilton Fish, which I have discovered on your website. If you are not the individual, or guardianship, of said image with whom I need to coordinate to re-publish the aforementioned image, please provide the contact information of such a person (s), as my publishers are keeping my project in abeyance until such a time as I can prove proper/legal ownership.

Your immediate attention to this matter would be most appreciated.

Humbly submitted for your consideration and immediate action,