A WALK DOWN BROADWAY

What ads did Forgotten Fans find on a five-hour journey down Brooklyn’s Broadway? What ads DIDN’T they find?

A recent walk by about a dozen intrepid Forgotten Fans down Broadway (turned out to be ForgottenTour #1) plunged the participants into a thoroughly fascinating land where advertisements and relics of the past 100 years rub elbows against the modern, vibrant society and economy of the final years of the 20th Century.

First, let’s make it clear that the Broadway we’re talking about isn’t the Great White Way of Manhattan fame, but instead, the five mile long thoroughfare in Brooklyn that runs between Williamsburgh and East New York. Hardly the romantic inspiration for poets, authors and Tin Pan Alley tunesmiths that its Manhattan cousin is, Brooklyn’s Broadway has been shrouded by an elevated railroad for the past eight decades, and passes through several neighborhoods that are generously described as economically depressed.

We began where Broadway meets Kent Avenue in the shadow of the Williamsburgh Bridge. These are the only blocks that Broadway is vouchsafed a view of the sky, since the elevated travels over the Bridge. (Even this part of Broadway was in shadow until the 1930s, as a spur from the elevated connected with a now-forgotten ferry at Broadway and Kent.) 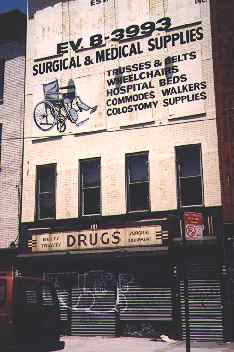 1940s-era drugstore sign. Forties ads are known for their no-nonsense, functional design, befitting the can-do attitude of the country at the time. 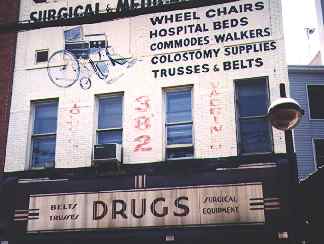 The store faces both Broadway and South 9th Street. 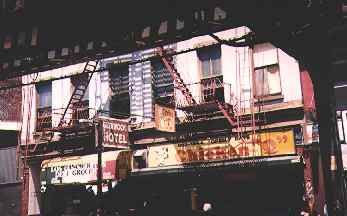 Descending under the el after it joins Broadway at Washington Plaza, you are met with the amazing reality that hotels and flophouses were once quite common on the streets that line elevated trains (the Bowery was shadowed by an el until 1955 and was dominated by flops during that time. 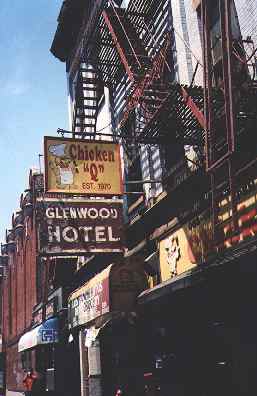 This old-time flop, the Glenwood, is still in evidence along Broadway near Marcy Avenue. 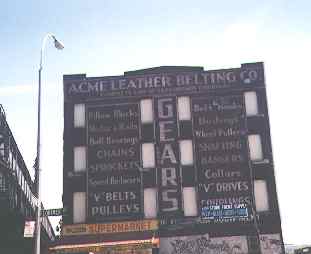 Acme Leather Belting is still on Lorimer Street, albeit in an unprepossessing storefront that hardly does the lavish 1930s-era splash ad on the building that advertised Acme to thousands of commuters on the elevated.

Now, what commuters taking the elevated would need with an auto parts store in Williamsburgh is questionable, but you have to applaud the effort. 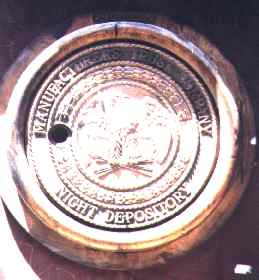 An abandoned bank building at Broadway and Bedford reveals the old name of a bank that has merged, then been swallowed by a bigger bank which was swallowed in turn by yet another bank. 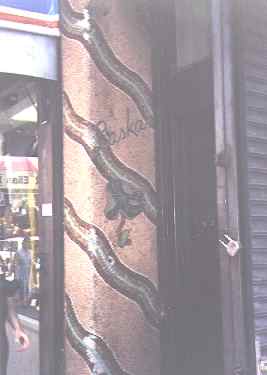 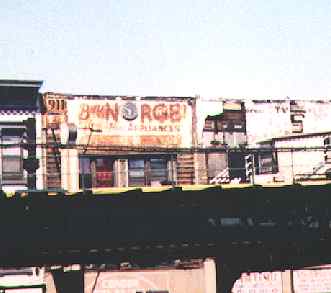 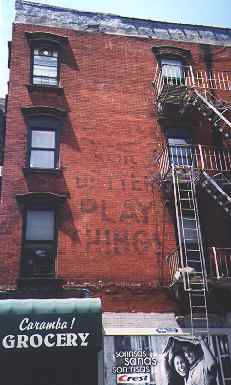 A toy company, whose name has by now weathered away, placed an ad on a building at Broadway and Keap. The sign reads “..for better play things.” 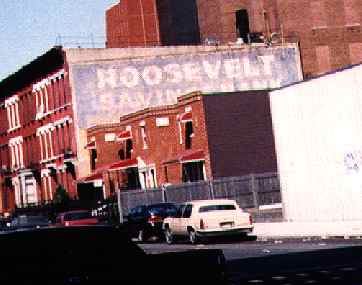 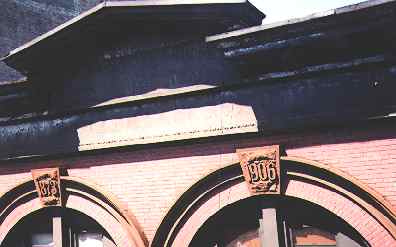 Visible from the Myrtle Avenue elevated platform is an example of the detailed stonework found on brownstone buildings of the late 1800s. Note two dates, 1873 and 1906. The first date stands for whatever company built the building’s founding date, and the next date is when the building was finished. 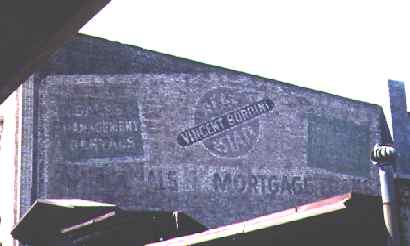 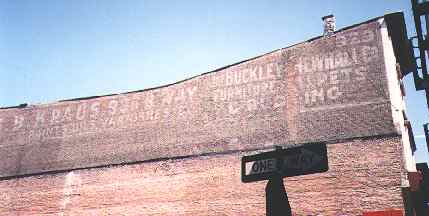 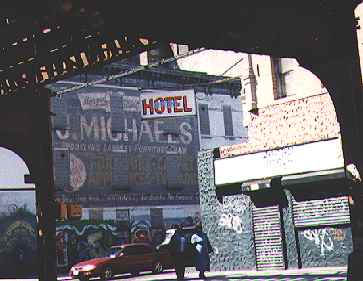 Near the Halsey Street station, another old Broadway hotel, this one across the street from the now-defunct J. Michaels furniture store, which had a number of branches throughout Brooklyn until recently. 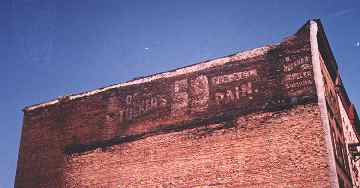 At Eldert Street, a view of the 1880s-1890s era Dr Tucker’s ’59’ pain remedy ad, with a closeup of the much smaller jewelers & opticians ad. These are among the most ancient ads still remaining on Broadway. But not the oldest! Charles H. Fletcher and his Castoria constipation remedy are not to be counted out of the Broadway action in this 1910s -era ad at Broadway and Schaefer Street.

For lots more Castoria ads, check their own Forgotten webpage! The last sign we saw on Broadway is probably the oldest of them all, at 1666 Broadway just past Schaefer. It’s on the side of a building that was once R. Pecan’s undertaker/embalming. This ad dates probably to about 1880 or so, and may even go back close to the Civil War era. At right, the name of the sign company can still be made out at the lower left corner of the sign. Frank Jump’s excellent site has a rather better exposure of this superannuated advertisement.

After a walk of about five hours, this was as far as I and the Forgottoners got, and we probably have barely scratched the surface of the oddities and relics that this unremarked thoroughfare has in store for the savvy urban spelunker.

In December, I did a previous Broadway walk. Here’s what I found.