When you get off the El at the Gates Avenue station and Broadway, you have only to walk up the street about a block or so to be transported back to a time when showbiz was really showbiz…when a night out meant putting on a shirt and tie or a dress…a time when entertainment meant more than just a movie and an overpriced candy bar. That’s because the proud old RKO Bushwick Theatre is still standing at the corner of Broadway and Howard. 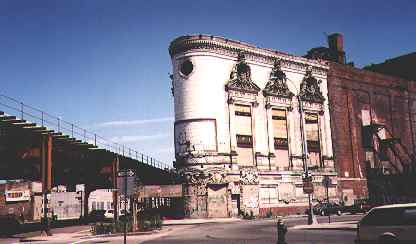 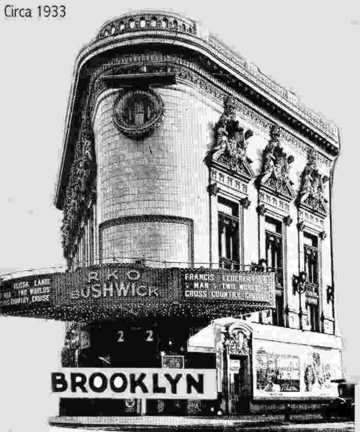 Forgotten Fan Dan Reynolds sent me this image of the Bushwick in 1933.

Benjamin Franklin Keith was creator of the vaudeville circuit, opening a number of theaters for vaudeville artists beginning in the 1880s, and though he died in 1914, B.F. Keith theaters thrived for years afterwards, with the B.F. Keith circuit booking vaudeville acts regularly into hundreds of theaters by the 1920s. For years after that, the RKO organization ran dozens of theaters and held various radio and television stations as well.

Vaudeville was the pre-eminent form of American show business entertainment from the late 1800s to the motion picture era began in earnest in the early 1920s. Comics, singers, dancers and plays all shared the same stage in a variety show that survived in show buisness until the early 1970s, when it was finally displaced from network television. For more on vaudeville and its influences and descendants, here’s a vaudeville website.

From the Cinematreasures.org message board:

The Bushwick was built by showman Percy Williams with William McElfatrick as architect, and first opened on September 11, 1911, as a vaudeville house. A year later, Williams sold it to Keith’s, which explains how it eventually became part of the RKO circuit. By today’s standards, the auditorium was very old-fashioned, with boxes overlooking the stage and a painted mural on the ceiling over the stage. In 1926 and again in 1929, it had some alterations done by Thomas W. Lamb. In 1938, more “streamlining” was done by Max Weinberger. The Bushwick closed around 1969 and then served as a church before being abandoned.

Forgotten Fan Doug Douglass has provided a list of Keith’s Brooklyn theaters. Many survived into the 1960s and 1970s playing those newfangled talking motion pictures. 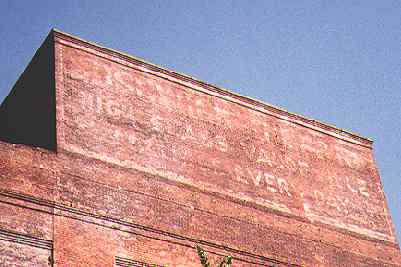 No doubt one of the few surviving vaudeville advertisements is this one on the RKO Bushwick on Howard Avenue.

Perhaps Jack Benny, Fanny Brice, Sophie Tucker and Bob Hope all honed their talents here; perhaps Houdini made one of his great escapes at the Bushwick! 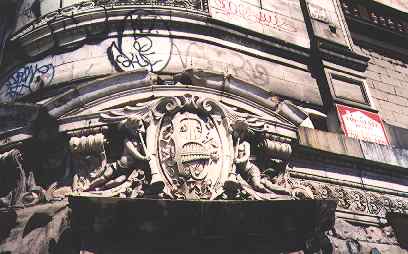 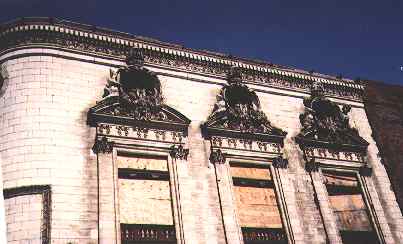 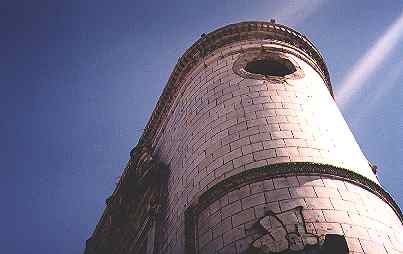 Some closer views of the grande old Broadway dame. Note the painstaking detailed stonework surrounding the trumpeting cherubs and the “B” festooned with musical instruments. And then notice what the graffiti demons have done to them.

Parts of the film “The Believers” with Martin Sheen and Robert Loggia were shot in the Bushwick.

At least it’s still standing. There’s always hope that the Bushwick can be refitted and reopened. What a shot in the arm that would be for Bedford-Stuyvesant. 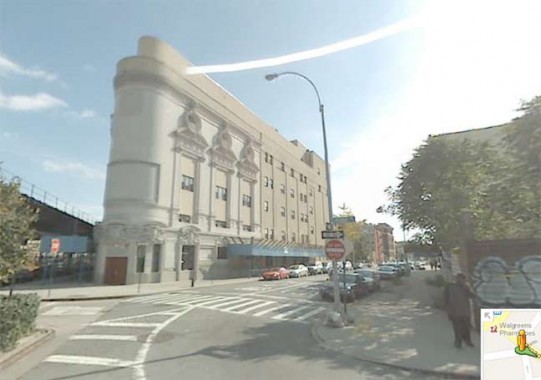 2004: And it has! The RKO Bushwick has been completely rebuilt with most of its exterior architectural treasures preserved; it is now the Brooklyn High School for Law and Technology.

SHADY SHRADY and other Bronx lanes

A WALK DOWN BROADWAY

[…] been rediscovered and repurposed through gentrification. Once abandoned row houses are rebuilt, theaters are reopened or turned into schools, and old warehouses are converted into lux condos. This gave urban exploration a new purpose: to […]

I would lik to know more about my home on 73 Eldert St between Bushwick and Evergreen. My home was build in 1925. I would also like to know the previous home owners names and will like to know about the neighborhood history before 1965. Thank you.

My great grandfather, Michael Minden, built a hotel directly across the street (Monroe and Howard) in 1911. It was there, that he became the first person in the US arrested by the feds for violating prohibition, an hour before midnight, January 16th, 1920. It looks like an empty fenced in lot from the photo.

Then we must be related, Patrick McMurray. Michael Minden was my great grandfather on my mother’s side of the family!

Lara, have you ever seen a picture of Michael Minden? I’ve found nothing in the Brooklyn Daily Eagle, and the Brooklyn Historical Society and Brooklyn Public Library have nothing.
Correction to my earlier post. The empty lot across from the RKO was the site of the Monroe Theater, which Minden started construction on in 1914,