14th Road and 119th Street was the location of an undeclared landmark in College Point, Queens for 127 years ­ before most of Queens was even settled. Flessel’s was there when Queens was double its current size ­ including all of Nassau County ­ and before it was a part of New York City. It was built during the Ulysses S. Grant administration and was there before the Brooklyn Bridge connected Long Island to New York City.

But Flessel’s didn’t make it into the 21st Century. 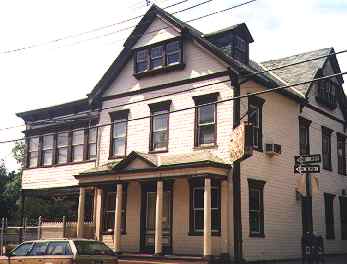 I had long known about Flessel’s, even before I moved to Queens a number of years ago, from its description in Willensky and White’s AIA Guide To New York City in 1989 ­ and always admired its out-of-time quality. After moving to Queens, I had always talked about getting up to Flessel’s for a drink or a meal.

But it never happened. Flessel’s closed for good in December 1998, and recently, the property was sold, and the building was demolished. 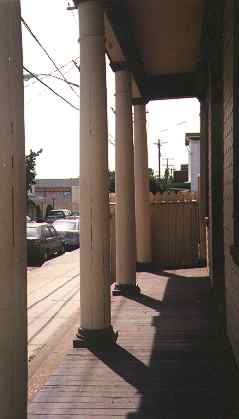 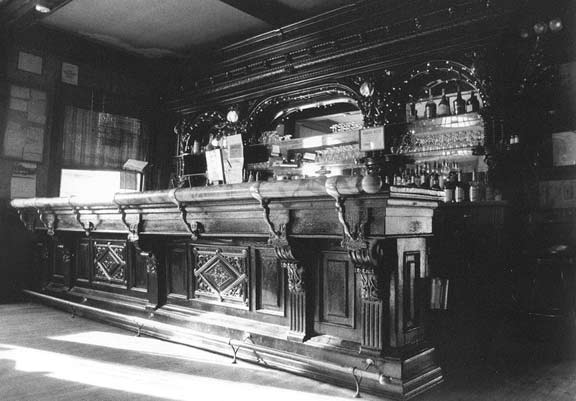 If you entered the bar through the front doors, instead of the through the former ladies’ entrance at the side, you mounted a wooden porch where horses had once been tethered (left). Inside, you could order a tall glass of Dinkel Acker and steady yourself against the solid onyx bar rail, polished by the hands of more than a century’s worth of tipplers.

As a breeze from the gently turning ceiling fan cooled your head, you could admire the beveled glass behind the bar and listen to the sound of footsteps on the solid wooden floors or the clack of colliding billiard balls. 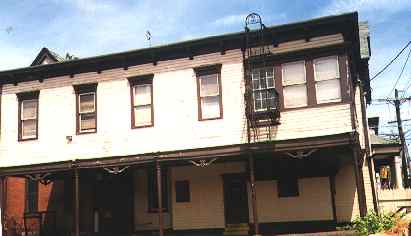 Here is a view of the side porch and former “ladies’ entrance.” 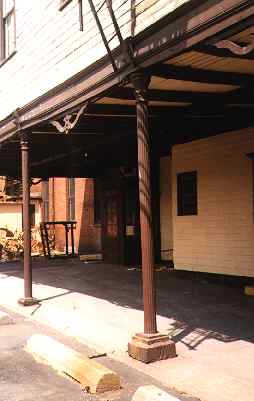 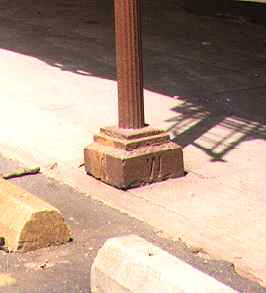 Closer view of the side porch.

If this was Flessel’s, why is there a letter “W” on the base of the porch columns? 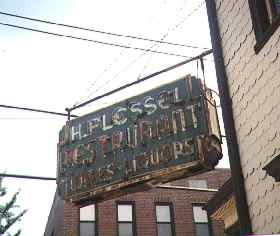 While Flessel’s dates from the 1870s, its newer neon sign was a golden oldie in its own right, having hung from the side of the building since the 1930s. 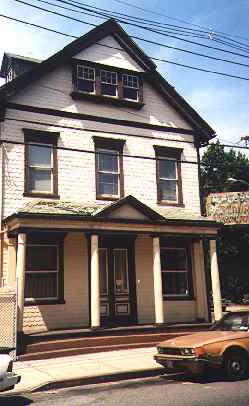 College Point, at one time, was a fashionable summer resort and still has a number of Victorian-era buildings as reminder of those forgotten days.

Over the years, the building changed hands. It has been used as both a hotel, bar and restaurant throughout its long history. It has been known as Witzel’s, Eifel’s and then, Flessel’s over the years. German food and drink was a specialty as a rule. 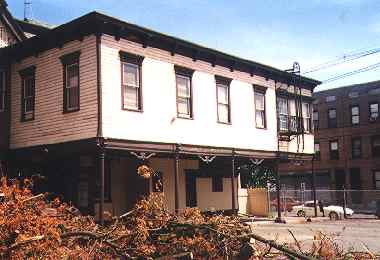 Side view of Flessel’s. Oak trees that were almost as old as the building itself were chopped down, a precursor to the razing of Flessel’s itself.

Incredibly, Flessel’s was never named a landmark by New York City, which would have saved it from extinction. Local preservationist Paul Graziano said in an interview with the Whitestone Times in June 1999:

“It’s a perfect example of a building that should have been landmarked 30 years ago but because of the politics in Queens, it never was.” Flessel’s “is truly, along with the Poppenhusen [Institute], the heart of the College Point community. If you talk to anybody in that town, not only will they know it, they probably had their wedding there.” 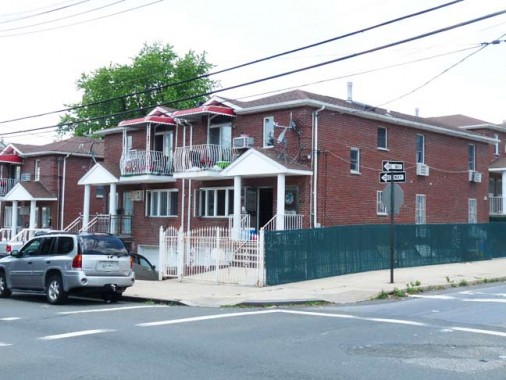 There are now a group of nondescript houses where there once was Flessel’s.

Marty Fleischer (skin) was my dad. Loretta Motz is my sister. I have alot of memories of Flessel’s College Point NY

How is Loretta doing? She was always a great host and wonderful person

I knew Charlie and Loretta and the Children well. John the bartender and Tommy Charlie’s nephew. it wasa fun place to work PT and to hang out.

What a terrible shame. Someone got very rich from tearing and building.And what happened to the beautiful bar that was there.? Anything left anywhere ?My grandmother was born there in the late 1800.
I went there often for there German food. Like Neidersteins, now just a memory.
Kathleen.

I rescued a tavern chair!
We wanted to dismantle and save the bar but was denied.

Perfect example of greed! Someone saw a chance to build a few homes on that lot and went with it! The city fathers dropped the ball, that place should have definitely been designated as ;historic. I grew up in The Point, remember that place fondly!

So sad to hear that Flessel’s was torn down. I worked there as a dishwasher in 1976-77 while I was in high school. The Motz family was great to work for and the food was delicious. I have fond memories of my best childhood friend, Ricky Motz making us thick roast beef sandwiches to take home the end of the night when we closed up. Great restaurant, great family!!

Hey Chuck, you must be related to Joe or Mike or Helen or another of the Kotsays from 14th road.
My parents owned the Old Rendezvous on the corner next to the firehouse in the 60’s and 70’s.
Jerry Mykitschak

Jerry……..where was the Old Rendezvous?…..I know that I went there just by the name but I cannot place it in my aging mind!!……Was it on a corner with a pool table?……

Actually that bar rail was Agate. Although Agate and Onyx are very similar. How do I know? My father in law tended bar behind it for over 20 years! lol. My mother in law and Loretta Motz were “sistas”.

Was that John Timms? Great place

Our family had dinner there before we moved to Florida in 1991.it was wonderful as usual.

Had many lunch and family dinners at Flessels. My Aunt workedthere in late 1980s. Still miss their German food and a good lobster!

This is Jim dancy, I grew up in College point on 116th Street between 14th road and 14th avenue. I have many fond memories of flessels. Does anybody remember the big beer garden on 14th avenue right at the curve heading into Whitestone?

A great place to eat the German top notch servings.

Lived in CP for over twenty years. A great place until the developers came in Always went to Milk Bard for the pickles.

Flessel’s was the best German restaurant in the area IMHO. Better, I think, than the German places in Glendale. For lovers of German food, it’s closing was a big loss. We have found a place out in Lindenhurst…not quite as good…but close. It’s called The Village Lanterne.

Peter Zaremba is the Lead singer in local Garage band called the Flesh Tones, a graduate of Flushing High School, who grew up on 149th Street and Beech Ave in Flushing, two of the band members were brothers from the Point, one of which while drunk and hanging out in the haydens punched a friend in the face and accidentaly caused his deathm he spent 18 months in jail upstate His name was Gordon Spaeth, a cousin of the Pace family who lived on 127th street off of 23rd ave at the top of the hill, near the animal feed retailer. The Timms lived near the old Trolley barn on 127th st and 14th ave, near the cheese cake store and behind St. Fidelis, the son was an Eagle Scout and went on to a distingused military carrer.I think the Spaeth;s lived on 123rd and 7th avenue

I stumbled across this while thinking of the past……and Flessels. I used to live in “The Point” way back in the 1970s on 118th Street……there was a deli on the corner and an old time bar in the middle of the block…..I used to go to Flessels with my “girlfriend” and her father years ago. I would get a beer at the bar, place my quarters down for a game of pool then dig into some great German food. Time passes……good memories remain. Enjoy the journey folks. The good old days………yes they truly were.

WHERE was the Old Rendezvous. I know I used to go there but I just can’t put my finger on WHERE it was!!??

JIM
May 23, 2020 – 3:35 pm
This is Jim dancy, I grew up in College point on 116th Street between 14th road and 14th avenue. I have many fond memories of flessels. Does anybody remember the big beer garden on 14th avenue right at the curve heading into Whitestone?
Yes Jim, it was the Village Grove where a supermarket now resides. My Father John Schmidt was manager of the Soccer club that was their home base (First Sport Club of College Point) They moved to the Five Corners bar when the Village Grove was torn down. Out front was a some sort of of navel cannon or gun captured during the Spanish American war. As a child I have many memories of the Village Grove. the owner at the time was George Bachman. When you walked in to the right was a shuffleboard on the closed porch. In the bar area was a deer head on the wall with a cigarette in its mouth. Christmas parties were wonderful, my older
brother played the accordian there at dances.

Memories, sweet memories……. George Schmidt , I went to PS27 in 1950 and 51 then we moved from 124thst to Bellerose Long Island in 1952 but my father continued to manage the First Sport of College for many years more.

Gary, the Rendezvous was on the same Ave that Klients was on, at the writing I’m not sure of the street but will get back to you on this site. It was on a corner, white building, my uncle Chick hung hung out there. (if you went to the Hafbrau at the “T” intersection where the train station was many many years ago. (postcards have pictures of it) made a right went to the next intersection where Klients was it was the next corner I think at this writing it was 20th Ave that went out to the small aiitport to Adventureland.