It was a 100-degree Fourth Of July in 1999 and I was staggering around the Lincoln Center area of Manhattan for want of anything else to do. Before I passed out from heat stroke, I took an idle glance skywards at 64th and Broadway, and it was then that I saw her. Not Hillary, not Barbra, not Cher, but the Liberty Belle herself. 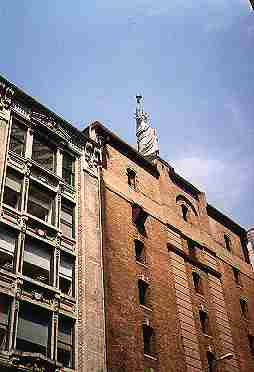 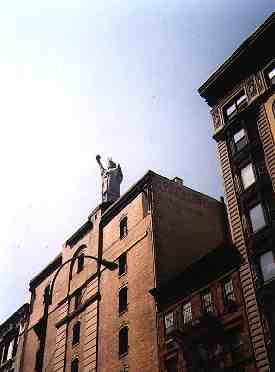 No, the Statue Of Liberty hadn’t been uprooted and moved to 64th Street.

According to the AIA Guide to New York City, this 47-foot tall replica had been here since 1902. It had been placed there to promote the Liberty Warehouse, which was the building’s original use. 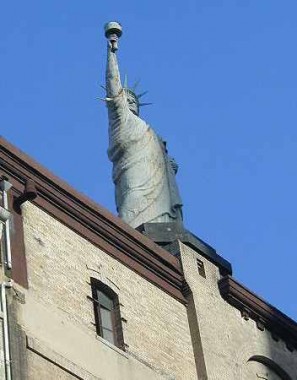 The residents of a high-rise apartment building across the street have a much better view of “Little” Liberty than is available from the street.

When first built, it must have dominated the neighborhood.

I always knew there was a large replica of the Statue Of Liberty somewhere in Manhattan, but I could never find it. Until now. 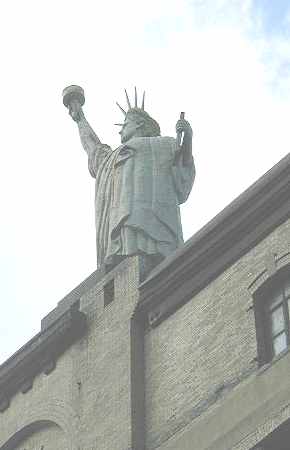 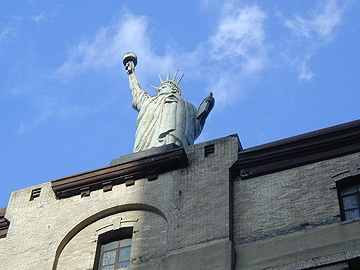 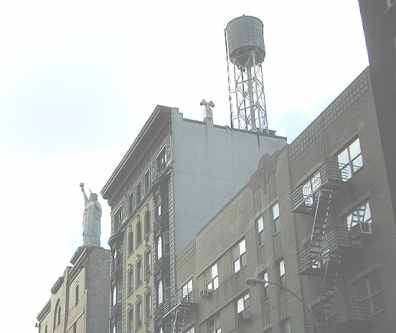 Little Miss Liberty was cast in Akron, Ohio, in about 1900 at the behest of auctioneer William H. Flattau. She was shipped into NYC on a flatbed car after being sliced in half lengthwise, and then soldered together again. When first erected, the statue had a spiral staircase that allowed visitors to climb up to the top to get a panoramic view, just like in the real McCoy in the harbor. That staircase was closed in 1912 and has fallen into ruin. Perhaps it can be rebuilt when Little Liberty is moved. At the time, there were no taller buildings in the vicinity, so the view from here was panoramic. 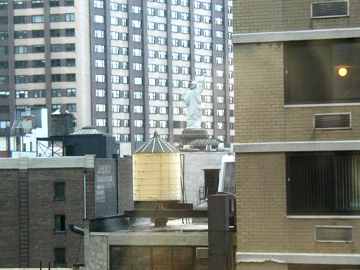 Little Liberty, as viewed from the 8th floor at ABC network headquarters on Columbus Avenue.

The statue replicated most of the details of its larger mentor, matching the robe folds and pedestal! 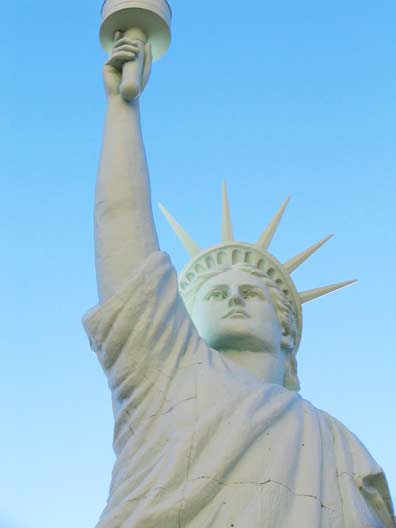 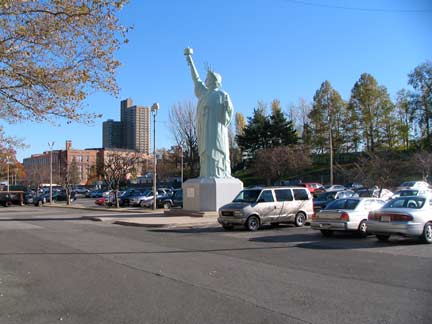 She currently holds her torch over the parking lot at the Brooklyn Museum on Eastern Parkway, where she had found storage for awhile. She was newly cleaned and stabilized, and was installed in 2005. 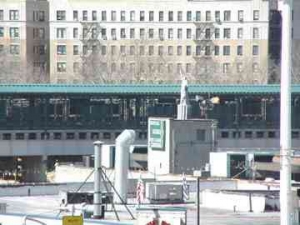 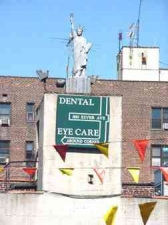 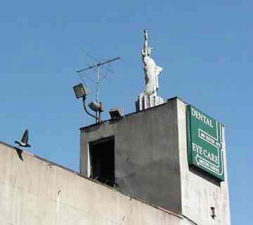 While the Manhattan Little Liberty isn’t there anymore, this one, at River Avenue near Yankee Stadium, has kept her position. 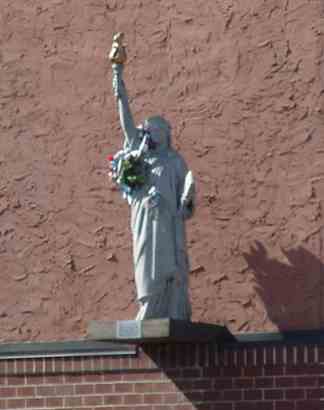 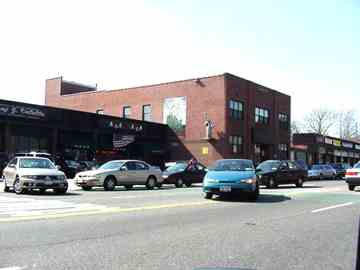 Yet one more Liberty, on Williamsbridge Road. The real McCoy, of course, continues to greet the tempest tost, the homeless, and those yearning to breathe free in the harbor. Until Charlton Heston finds it washed up along the Brooklyn coastline in Planet Of The Apes.

Thanks to Charles Gallo for assistance with this page.

Thanks for the article on the statue, I discovered too it one day back in the 80’s while walking to work at Un Duex Trois . It was hard to see unless you knew where to look. Although I’m sorry to hear its gone, it was nice to see your images!
Thanks Peter.

Heat stroke can kill or cause damage to the brain and other internal organs. Although heat stroke mainly affects people over age 50, it also takes a toll on healthy young athletes.“.^

Remember to stop by our own homepage http://picturesofherpes.colt

I knew about the statue, because Dad used to rehearse with the Goldman Band in the Liberty Warehouse, in the early 1970s. Dad said it had been one of the models for the original statue; evidently someone had told him a myth that wasn’t true. He was a trumpet player at the end of almost 40 years of performing then.

As a Auschwitz Survivor, we came here on an Army Transporter ship July 16.1946/
We got this apartment next to Liberty Warehouse and the Roosevelt Hotel on west
64th street in a Brownstone House.
It was always an amazing sight for our visitors to see the statue on the roof,
it made them feel great to be in the good old U.S.A..
I moved out 1951 to get Married.
I understand Lady Liberty has a new home.
My Mother had to move a few years later due to Illness

Years ago(late seventies)I had been over to The Children’s Television Workshop building and was looking for a bit of lunch,when I happened upon the statue,Little Liberty. I had been going to school and living in Manhattan for years but I never knew it was there!
I hadn’t thought about it for ages and just a year ago,I tried to find it …it was gone! Then I thought maybe I had a little too much to drink or smoke when I saw it last…hey,after all,IT WAS THE SEVENTIES! Anyway,I’m sooo glad you cleared this up for me but am sooo sorry it’s gone!!