When the talk turns to street lighting, as it often does with me and Forgotten Fans (remember those cone-shaped things that turned up on bishops crooks in the mid-40s? Remember when they changed the orange fire alarm lights from globular to cylindrical? Why did they tear down those weird vertical castiron poles in Times Square?) things tend to get a little esoteric. With that in mind… we now present 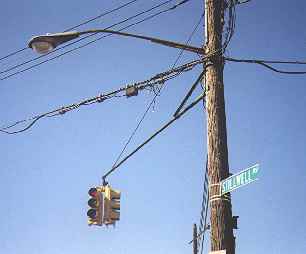 In the mid-1960s, at the height of the white-green mercury bulb craze, which left the streets of New York City bathed in a weird greenish-white glow (quite a change from the subtle yellowish light produced by the old incandescent lights) New York City saved, no doubt, quite a bit of money by installing the four luminaires shown above.

They were undoubtedly cheaper because they did not have the glass diffusers that their cousins (at left) from Westinghouse and General Electric did. The side streets of the outer boroughs teemed with them. But now, they’re dying out, like the Asian tiger or the passenger pigeon. Let’s take a closer look at these dim bulbs.

If there’s a lamp worthy of being called king of the Cut-Rate side street luminaires, it’s the Wedge. It’s the dominant form of the four and has even been deemed able to light street corners, like the one at right at Pendleton Place and Franklin Avenue in New Brighton, Staten Island. The island borough is the last stronghold of the Cut-Rate Luminaires.

These were manufactured by Westinghouse and were the DEO-1 Silverliners. They first appeared in 1965.

Note that the DOT has misspelled “Pendleton” on the green street sign.

Second in frequency among the Cut-Rates, the Scoop was never given important intersections to guard, but it did see action in unusual or picturesque locales, like the one at right on the now-deceased Bank Street Bridge in Staten Island where it had a view of Manhattan.

Closest resembling the 1940s-era Crescent Moon incandescent fixtures they replaced, these beak-shaped curved luminaires are becoming ever rarer. The ivy-cloaked one at right is at the northern end of North Henry Street in the industrial Greenpoint section of Brooklyn. The one at right, attached to a double mast which makes it singular indeed, is on Whitney Place in Gravesend, Brooklyn.

In the unusual shot at the Rockaway Park IND station, Turtlebeaks share a platform with Gumball-shaped fixtures from the 1940s. Stranger bedfellows in New York City you will never see. 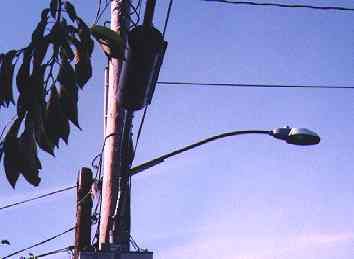 Rarest of all the Cut-Rate luminaires, the Nozzle would occasionally appear in a gold-tinted color, like its cousins, the Turtlebeaks. Essentially the only difference from the Turtlebeaks is the lack of curvature on the diffuser.

This was one of the few extant specimens I’d seen left in the city in 1999, on Nicolls Avenue in Corona, Queens.

Most of these luminaires were replaced in the Great Lamp Purge of 2009, which replaced nearly all luminaires with 2009 editions of the GM400.