There’s a pretty boring-looking, undistinguished building painted gray along Third Avenue between First and Third Streets at the end of Park Slope, where it meets the Gowanus Canal. Walking past, or riding past on the bus as I did for decades, you’d never guess what the building used to be used for. 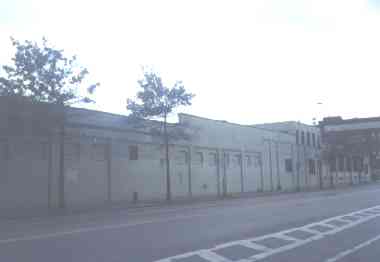 Actually, the wall you see here is the very same wall that baseballs hit by a major-league Brooklyn franchise, and their opponents, went over. This is not Ebbets Field, but the site of Washington Park, where the Brooklyn Superbas, later known as the Trolley Dodgers and then as the Dodgers, played between 1898 and 1912. The property is owned by Con Edison on Third Avenue, Brooklyn.

The entrance, long since vanished, was at Fourth Avenue and Third Street. In that era, the Dodgers used the nearby Old Gowanus Stone House, built in the late 1600s, as a clubhouse. 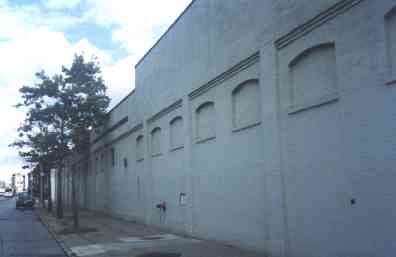 Con Edison quickly snapped up the site and retained the 20-foot high left field wall, which is in the photo at left. Probably the windows are the most recognizable element of the old stadium; they weren’t painted over and bricked up in the old days but were most likely kept open with no glass at all.

This is the oldest section of any former major league ballpark still standing in the country!

Forgotten Fan Neil DeMause, former editor of Here Magazine who knows from ballparks…see the book he coauthored, Field of Schemes: How the Great Stadium Swindle Turns Public Money into Private Profit … has some additional information on these remains.

First off, I was confused to read that the left-field wall of Washington Park was still in existence on Third Avenue, since I was certain I’d read that the park was between 4th and 5th Aves., between 3rd and 5th Sts. (I.e., in present J.J. Byrne Park.) But, sure enough, there were the site dimensions at ballparks.com, and they had it between 3rd and 4th Aves., and 1st and 3rd Sts. Obviously, something odd was going on here.

Here, as near as I can figure it from piecing together various sources, is the story of the Washington Parks:

In 1883, Charlie Byrne opened Washington Park (then a two-decked wooden grandstand) for his Brooklyn team in the minor-league Interstate League.

The next year, he moved his team to the American Association, then a major league competing with the National League. Byrne’s Trolley Dodgers (renamed the Bridegrooms in 1888 because several players were newly married — nicknames were pretty informal back then) played in Washington Park until May 23, 1889, when it burned to the ground. But within a month, Byrne had erected a replacement facility, this time with just one deck but an extra 400 seats, boosting capacity to a mammoth 3,000.

In 1890, all hell broke loose. The Trolley Dodgers jumped from the AA to the NL, intending to move as well into the new Eastern Park in East New York. However, this was the same year that a fledgling players’ union split off and formed their own league, the Players League, and that league’s Brooklyn franchise got a lease on Eastern Park first. So the Trolley Dodgers were stuck in Washington Park. (Meanwhile, the American Association hurriedly organized a Brooklyn team and had them play in Ridgewood, Queens.)

By the next year, the Players League revolt had been broken, and the Bridegrooms were free to move into Eastern Park. Washington Park was abandoned.

Now here’s where things get murky. In January 1898, Byrne died, and his assistant Charles Ebbets took over the club. Because Eastern Park had high rent and low attendance, Ebbets decided to move the club back to Washington Park. Now, I have two sources (Bill Shannon’s “Ballparks” and The Sporting News’ “Take Me Out To The Ballpark”) which specifically say Ebbets moved the team back to “Washington Park between 4th and 5th Avenues on Third St.” But a third source, the “Encyclopedia of Major League Baseball Teams” by Donald Dewey and Nicholas Acocella, has this to say:

“Within months the team had abandoned Eastern Park and was moved into a newly built Washington Park, erected across the street from the facility the Bridegrooms has played in for their inaugural 1890 season.”

So maybe this was the Third & Third ballpark, the earlier one was the one in J.J. Byrne Park, and Shannon and the Sporting News had just conflated the two? Ah, but there’s more.

The Bridegrooms/Dodgers/Superbas played in this new Washington Park, with wooden grandstand and seating capacity of 18,000, until 1912, when they moved to Ebbets Field. One of the reasons cited (by Dewey and Acocella) for the move was that there was a row of tenements (known as the Ginney Flats) beyond the outfield wall that enabled spectators to watch the game for free from rooftops. (This was another common problem in the early days of baseball — the Detroit Tigers fought a decades-long battle against “wildcat bleachers” outside their ballpark, before finally just buying up the lots and tearing the houses down.) But it wasn’t the last of Washington Park. In 1914, as Shannon writes:

“The Ward brothers of baking fame bought a team in the outlaw Federal League and decided to have it play at the old NL park, since most fans were very familiar with it. However, it was completely reconstructed by the Wards into a brick and cement building with some structural steel foundation. A twelve-foot-high brick wall was built around the entire park, the stands were almost completely rebuilt on poured concrete, and the centerfield bleachers were given a brick foundation.”

So… was this Federal League park actually the one that has a portion remaining? (It says 12-foot-high brick wall, but it could easily have been 12 feet in some places and 20 in others.) For that matter, which block was this FL ballpark sited on? There’s a photo of the 1914 construction in the Shannon book, and it certainly looks as if the whole place has been demolished and is being rebuilt — there’s a steel grandstand going up along what looks like the third-base line, right in front of the American Can Company building. (Which, if I remember right, is still there on the south side of 3rd St. between 3rd and 4th Avenues — I’ll walk down there and check to be sure.) If my geography is right, this would make the background of the photo the left-field/3rd Avenue wall, and there’s no wall there in the photo that looks like the wall pictured on your site, further raising my suspicions that the wall there now did not belong to the Dodgers, but rather to the Brooklyn Tip-Tops, named for owner Robert B. Ward’s Tip-Top bakeries.

Two more odd notes from Dewey and Acocella. First off, they mention in passing that “Giants owner Andrew Freedman [persuaded] his City Hall friends to vote down a proposed subway station for Washington Park in 1898.” Since subway construction didn’t start until 1900, and plans to extend it to Brooklyn weren’t even proposed until 1905, I have no idea what they’re talking about — an el station, maybe?
The other tidbit is that the owners of the Tip-Tops built five 80-foot light towers at Washington Park during the 1915 season, in anticipation for playing night games on Mondays, Tuesdays, Thursdays and Fridays the following year. There was no following year, however — the FL folded during the offseason.

Finally, a brief word about the Old Stone House, which just about every source refers to as being used as the Dodgers’ clubhouse. But then we have New York City’s official page on the stone house, which says:

“By the 1890s the house had been demolished, but was rebuilt with the original stones in the 1930s to serve as a sports facility in the newly opened J.J. Byrne Park.”

It was destroyed, incidentally, according to “The Battle of Brooklyn” by John Gallagher (which I just happen to be reading now), “in a military demonstration of Gatling guns and buried during street grading and park leveling operations in the 1890s.” They sure had a funny way of treating 200-year-old historic landmarks back in the 19th century.

Frank Graham’s The Brooklyn Dodgers (1945) says that  “brave and hardy souls who risked the journey {from Manhattan to Washington Park} were usually careful not to cheer out loud”, since, when “a Giant rooter so far forgot himself as to yell for his team”, it could precipitate a grandstand-wide brawl.

Also in the ‘oughts, spectators on the fire escapes of  the Ginney Flats, a tenement across the street, hurled spears fashioned from umbrella ribs at Giant outfielders. I’ll take flying Double AAs at Yankee Stadium any time.

On June 10, 1910 “the McGrawmen” struck back, when half the infield and the leftfielder answered taunts of “you’re yellow” by storming the stands, knocking the wrong man unconscious, and slugging everyone else within reach. Only the third baseman was arrested.

The Superbas’ last season at Washington Park was Casey Stengel’s first in the majors. He hit .316 as a late season call-up.

Benny Kauff was a champagne-swilling daredevil and playboy called both “the first Joe Namath” and “the Ty Cobb of the Federal League”. Famous for his silk underwear, Benny’s every move was tabloid-fodder.  His celebrity was brief, ending permanently when he was banned from baseball for associating with car thieves. But, with the 1915 Brooklyns, he was the Federal League batting champ at .342.

Want to see Washington Park as it was when it was open? Check this site!

2008: The wall seems secure after a period where Con Ed wanted to raze it, but photographic evidence has emerged that the wall was built after the Federal League Tip Tops moved in, and so, the wall isn’t a relic of Dodger days. 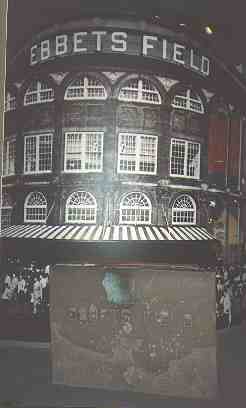 Though Ebbets Field was torn down after the 1957 season, its cornerstone has been saved at the Baseball Hall of Fame in Cooperstown, NY. 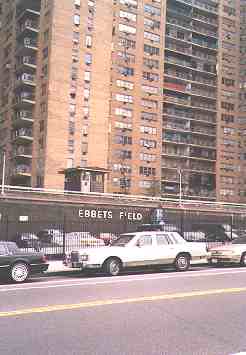 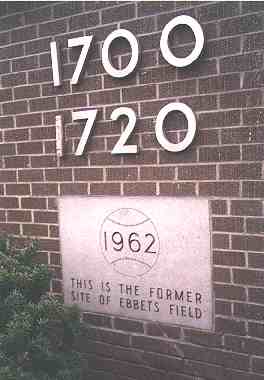 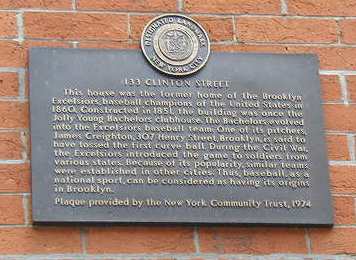 This plaque at 133 Clinton Street in Brooklyn Heights commemorates the Brooklyn Excelsiors, Brooklyn’s first pro team, which, according to the plaque, helped spread the game throughout the country in the post Civil War years.

Isn’t there still doubt and even confusion if this wall was anyway even connected to the old Brooklyn Dodgers?

A site dedicate to the history of all Brooklyn Ballparks – http://www.brooklynballparks.com/

You can get an amazing 1924 aerial view of the old ballpark at http://gis.nyc.gov/doitt/nycitymap/, at the time without its baseball diamond.

It doesn’t resolve who built it (probably for the Federal League), but I don’t see an Old Stone House in Washington Park as far as I can see.

By the way, the 5th Avenue el already had a station at 3rd Street so the story about adding a station does not make sense to me.