Safety considerations have forced the demolition of a Staten Island bridge that had pretty much remained unchanged for the last forty years. It had its original railings, 1960-vintage mercury lamps, and of course, its original Belgian block roadbed. Of course, here at Forgotten NY, it lives on… 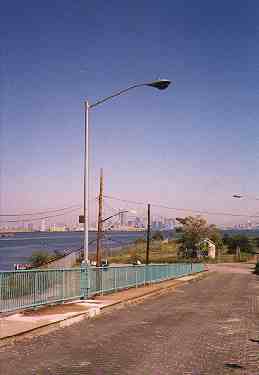 As is true elsewhere in this New Brighton section of Staten Island, tremendous views of Manhattan can be found from just about everywhere in the neighborhood.

Note the 1960-vintage lampposts on the bridge. 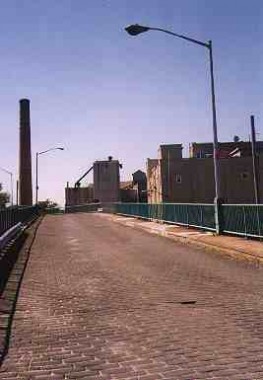 In late 1999, though, it was determined that the bridge, which had seriously deteriorated over the years, could no longer handle the heavy truck traffic that used it to reach businesses and warehouses facing the Kill Van Kull, the waterway that separates Staten Island from New Jersey. And so… 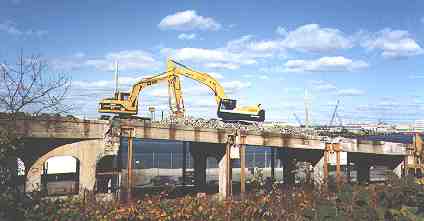 The Bank Street Bridge is no more. An at-grade roadway over the Staten Island Railway has replaced it. As a rule, grade crossings in New York City have been eliminated over the years, but since the SIR is unused here, it’s not a problem.