When I began this page way back in 1999 there were still a number of lamppost mounted small slot mailboxes to be found around NYC, mostly in outlying areas. It seems that one by one they all have disappeared, so this page records a lost species. 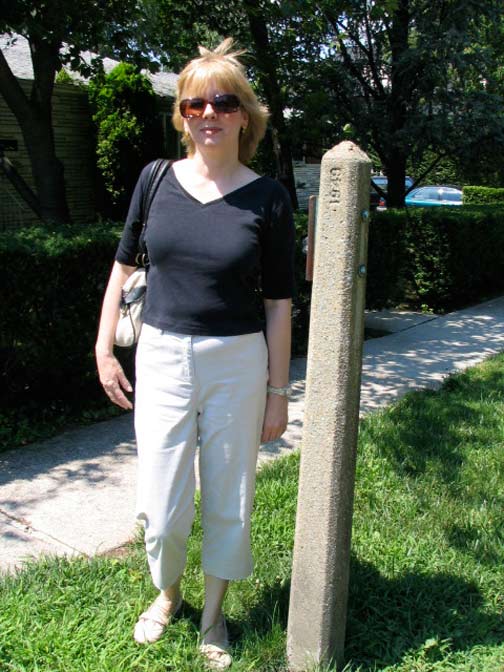 However, if you see a pebbled concrete post stamped with a date (this one says 1949) at the top like this one in Douglaston that ForgottenFan Vicki is standing next to, all of them once held a slotted mailbox…like these: 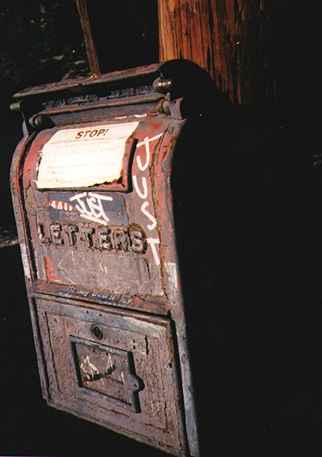 This ancient mailbox can be found on Palisade Avenue near the Riverdale Station in the Bronx. At one time, small mailboxes like these were standard issue in the five boroughs, but as mail gradually increased in size, larger mailboxes became necessary. For the most part, small mailboxes were mounted on telephone poles as seen here, but they were also mounted on short concrete poles, which also can be found in certain areas.

As you can see, these mailboxes had very small slots which only admitted letters or the thinnest of packages. photo: Jon Halabi 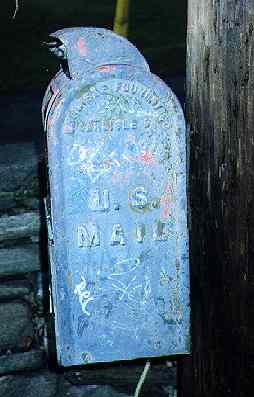 These two views of the same mailbox were taken about three years after the first picture. The paint has faded just a bit more, and there is a little more graffiti.

I’m not even sure the post office, other than the mailmen assigned to this route, even know this box is there–it would have been removed long ago!

The Carlisle Foundry in Carlisle, VA made this box. 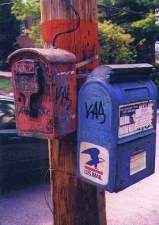 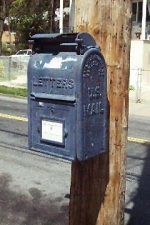 Another box in rural Riverdale, by the Danville Stove Manufacturing Company of Danville, PA, could once be found at Independence Avenue, Hudson River Road and West 254th Street. 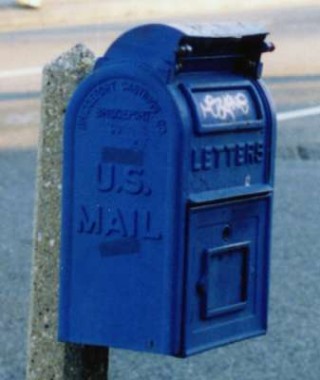 Ancient, one-slot mailbox still in use at Union Turnpike and 268th Street in Glen Oaks, Queens. This one was from the Bridgeport Castiron Company in Connecticut. Note the concrete post. [Gone by 2003] 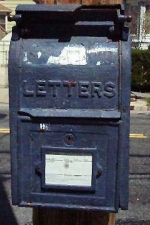 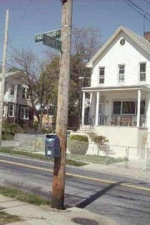 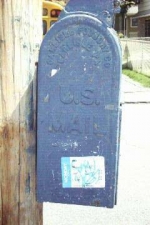 This ancient mailbox used to be found at Fingerboard Road and Summer Street in the Rosebank section of Staten Island. It’s also from the Carlisle Foundry. Unfortunately it was replaced by a standard box in 1999. 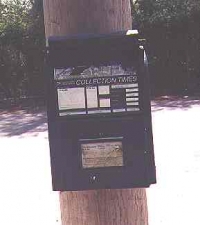 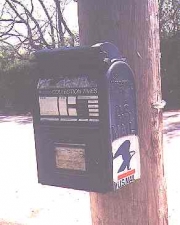 This ancient mailbox was on the corner of Richmond Valley Road and Madsen Avenue. A US Mail sticker with a modern eagle logo had rather redundantly been placed on the side of the box…right under the embossed US Mail sign. This one was also from the Bridgeport Castiron Company in Connecticut. 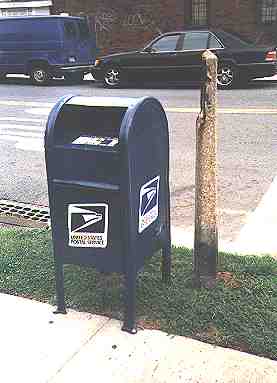 I was so glad to see these photos of the mailboxes I remember from my youth. Until now, I had only found photos in black and white. My memory said “red” for the one that was mounted on a street lamp post in our Bronx neighborhood in the early 1940s. But I wasn’t sure—-could I be confusing it with the fire alarm box? In your photos, I see the remnants of red paint on some boxes, and blue on others.
Riverdale, where some of the boxes you identify were photographed, is west, but in walking distance from where I lived.
Thanks for posting these photos.

I remember all outgoing mailboxes, whether the small letter-only ones mounted to posts, or the larger stand-alone ones, were painted red and blue in the 1960s. The “body” of the box was blue, while the top part where you drop in the letters or small packages was red. Then around 1971 or so, the began painting them solid blue. This must have been when the US Post OFFICE was changed to the US Postal SERVICE in the early 1970s. I read on wikipedia that the red/blue color scheme was announced in 1955, but prior to that, the color was military green. I’ll have to watch some old movies in color from the 1940s or early 1950s if they have “city street scenes” to see if there are olive-drab green outgoing postal boxes. However, in the 1960s and 70s (and some even survived past then), the USPO/USPS had olive-drab green storage-only boxes on city streets. These were only for the mailman to store excess mail for later pickup while delivering mail on his route. These green boxes were shaped just like a regular stand-alone steetside box, but had no letter-drop opening for the pubic to use. They green boxes were closed up completely, access available only to the mailman with a key.

I have one of these boxes, dated May 1942. I cannot find any collectible information any where. I have it mounted on my patio. I stripped the paint and found about four paint schemes. Red ,white and blue but no set pattern. I got this one in Northern Calif.

One of the things i had to get used to besides the adresses (for example – 124-69 something street), was that mailboxes are not in people’s yards. In Pennsylvania, mail slots were pretty much obsolete, but here, you’re rare if you have a mailbox!

I have an old post type , it was painted red/blue , but now I need a pix of where the division line was from red/blue , can anyone help ???

I also have one of the old “post” mailboxes. I plan to refurbish it. I grew up in a Goodyear mill village in NW GA. As I recall, these boxes were located on the corners of each block. My memory might fail me, but I think I remember them being painted a dark green color; maybe hunter green, or olive drab. This was back in the 1940s & 1950s. Later, they were painted red & blue; maybe red, white, and blue.
Frank Plant

I remember as a child in the 1960’s the mail boxes were painted with red tops and blue bottoms. I also remember the small ones that were posted on telephone poles for letters only. They also were ubiquitous and easy to find in every neighborhood in New York City, place a few blocks apart. Today, you are hard pressed to find one and the distance between them can be great. If you do not drive, this is a problem when you need to mail something. The post office regularly checks the volume in each box and will remove them if the volume does not meet the quota. With the internet, a lot less mail is physically sent these days and some neighborhoods are almost completely devoid of mail boxes due to the possibility of terrorists hiding bombs in them….like the Wall Street area in lower Manhattan.

Thanks for posting this information. There are least two of these concrete posts with the brackets but no collection box in Williamsburg, VA. We were not sure what they were until we saw this web page.

There is a concrete post that had one of these mailboxes, in Oceanside, NY. I saw it recently this year and according to google maps, it still had a mailbox attached to it in 2012, but the mailbox is gone now. The post is still there. I was driving myself crazy trying to figure out what the heck that post was for! I had no idea what to search for to even find out. And then while using google maps to look at my uncles house today, I saw a little blue mailbox attached to it! So I googled “vintage tiny blue mailboxes on a concrete post” and that’s how I found this site! The post is on Cortland Street in Oceanside, NY.

can anyone tell me what shade of “blue” that was used on the stand alone collection boxes? I would like to repaint mine. TYIA

Great resource. We stumbled over two mail box concrete posts without boxes in Abbeville, LA and it took some group think to figure out what they were, but one of us guessed correctly. A little google searching turned up a few pieces of confirmation but not this website. The U.S. Postal Museum website features some photos and turn of the 20th century film footage showing the mailboxes and posts in action but the focus is on the box, not the post. Good to know there are other obsessive souls out there.

Since my last comment we’ve been spotting these around Louisiana. Two in Baton Rouge, one in Pineville, and this week, one in Thibodaux. They bear a resemblance to our old state highway right of way markers but those usually have a LDH stamp on them, are shorter, do not have any attachments, and are not usually in urban or suburban settings. None of the mail box posts I’ve seen so far have a date stamp on them. It’s fun to look for them when I travel.