Most people think Manhattan is buried under layer upon layer of concrete, with all evidence of its primordial past vanished. There’s still hundreds of acres of natural Manhattan Island still left though!

Take the IRT all the way to the last stop in Manhattan, at 215th Street, cross to Broadway, walk up the steps, go two blocks straight ahead, and you’ll be in a forest that has remained pretty much untouched by human landscaping since colonial days.

What about Central Park? As natural as some parts of Central Park look, every square inch of Central Park was originated on the planning boards of Olmstead and Vaux. Inwood Hill Park is 196 acres of primordial forest (with the occasional path and rusting park lamppost).

If that’s not enough to set Inwood Hill Park apart from all other Manhattan parks…it’s the site of a real estate swindle….er, deal that would make Donald Trump or Leona (when she was alive) green with envy! 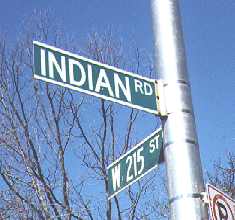 You enter Inwood Hill Park by crossing a short street called Indian Road. The street commemorates the Weekquaeskeeks, an Indian tribe that lived in the area. Remains of their settlements were found in nearby Isham Park (a nearby, more formal park with kiddie swings and benches).

This is also the only road on Manhattan Island actually called “Road.”

The Big C stands for Columbia U., which plays intercollegiate football and soccer games at nearby Baker Field. The bridge is the Henry Hudson, built in 1936, which carries the Henry Hudson Parkway over the Harlem River. 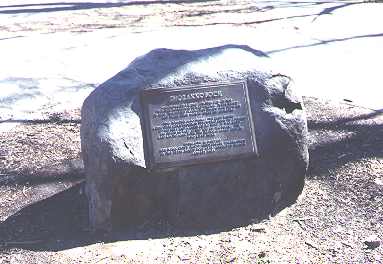 A short walk along the park path toward the hills, and you’ll see this rock with a metal sign on it. This is the site of the swindle I was talking about.

In 1626, it is said, Dutch governor Peter Minuit purchased Manhattan Island from the Weekquaeskeeks for a collection of beads and trinkets valued at 60 guilders, ascertained to be worth 24 US dollars. Big money in those days.

The rock, called Skorakopock Rock, is on the exact site of a giant tulip tree, its girth marked by a concrete ring around the rock, where the transaction took place. The tree remained on the site until 1933.

Inwood Hill Park is filled with tulip trees, which are native to Manhattan Island. Tulip trees grow tall and straight and were used by the Weekquaeskeeks to build their canoes. 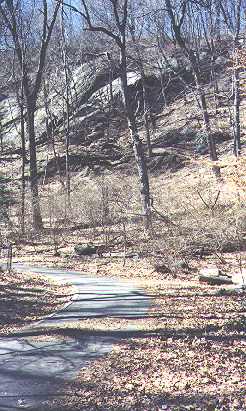 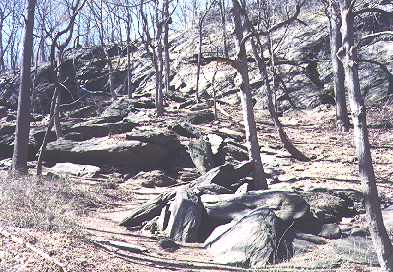 Just past The Rock, the path leads you along the hill. You will see rock formations that were dragged here by the Wisconsin Ice Sheet during the last ice age. Native rocks like this are visible in many areas in Manhattan and the Bronx, but are especially noticeable in Inwood Hill and nearby Fort Tryon and High Bridge Parks.

In the natural hollows formed by the rocks, the Weekquaeskeeks found shelter, cooking clams and oysters. In the past, pottery artifacts have been found in these crevices. 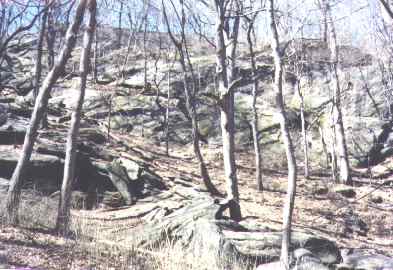 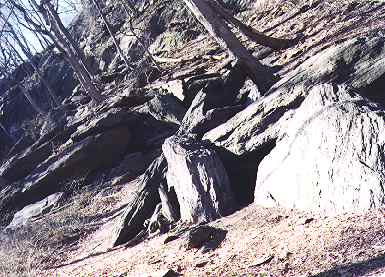 2 more views of the rock caves. 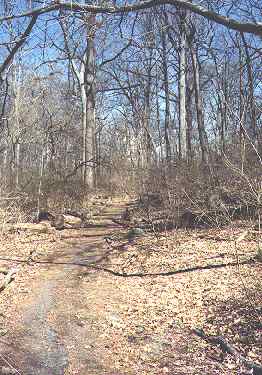 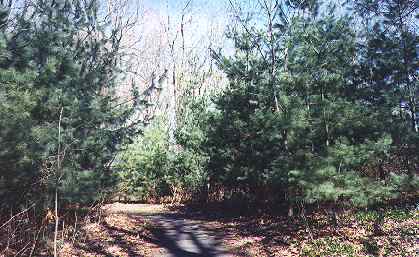 Follow the path along into a primordial Manhattan with only the birds to interrupt the silence.

Eventually, the path U-turns. After it does, bear to the left and take the path closest to the Hudson River.

Pines provide a swatch of green even in the winter.

Bearing along the leftmost path, you will eventually come to a small clearing and it is there that you have a swweping panorama of the Hudson River and the New Jersey Palisades, the same one that the Weekquaeskeeks enjoyed for millennia before the 1700s. 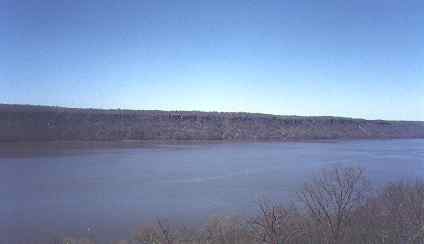 We are now overlooking the Hudson River and standing on an increasingly high promontory.

After this glimpse of the Hudson, bear on a path that goes toward the right, then go left again. You will be on a path overlooking Inwood Hill Park and the little salt marsh below. You are at the top of the hill that looked so high when you were at Shakoropock Rock.

The path you’re on curves around and under the Henry Hudson Bridge, providing further views of the Hudson River.

This is the Henry Hudson’s sister bridge. It carries Amtrak railroad tracks over the Harlem where it joins the Hudson. 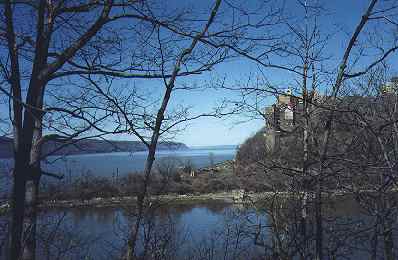 Wouldn’t you like to have the view the folks in that apartment building in Spuyten Duyvil, across the Harlem River, have? I would.

Retrace your steps under the bridge, descend the path down the hill, and you’re back in ‘civilization.’!

[…] that he’s in the Manhattan of a few centuries ago — i.e. when the city was mostly primeval forest. It’s at times evocative, gritty, and funny, hitting the expected beats in unexpected […]

I lived in High Bridge, as a young girl, at 166th St. and Woodycrest. There was a vacant lot down 166th St. toward Anderson Ave., at the time with a huge, dare I say rock? It was huge, we kids all played on it.

Then in 1998 I went back to High Bridge to see the old neighborhood. I was amazed to see that built over the old rock was a building. A great portion of the rock was exposed. I couldn’t imagine why they would leave the rock exposed in that way, what significance could this rock hold that they felt they needed to save it from complete ruination. Can someone there tell me? If this rock, boulder holds some hidden meaning?

I have a photo of it, if there is some way I can send it to you.

Thank you in advance.
Otilia Santos