The Long Island Railroad’s Rockaway Beach Branch diverged from the LIRR’s Main Line in Rego Park at about 66th Avenue at what was called Whitepot Junction. It ran south through the neighborhoods of Middle Village, Woodhaven, Ozone Park, Howard Beach, across Jamaica Bay and through Broad Channel, and on to the Rockaway Peninsula, where one spur continued east and rejoined the LIRR in Far Rockaway, and the other went west and dead-ended at Beach 116th Street at the Rockaway Park station. 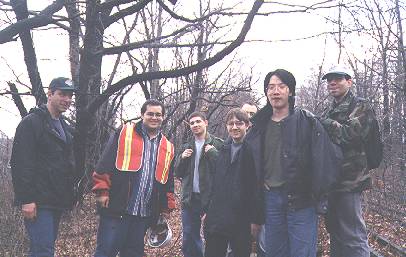 In the spring of 2000, a band of intrepid explorers led by railfan Mark Wolodarsky (in orange MTA jacket) and the late Bernard Ente (at left) walked the Rockaway Branch from Rego Park to Woodhaven. I took the photo.

In the early days of the IND subway line, there was a plan to attach the LIRR Rockaway Beach Branch line to the IND subway. However, the Depression forced the IND to shelve that plan…but not before installing signage in some of its stations pointing to a Rockaway connection that was never built!

So, the line remained with the LIRR until 1950. Frequent fires on the wooden trestle crossing Jamaica Bay impelled the LIRR to toss in the towel on the old line. It was purchased by New York City, which rebuilt the tracks and began subway service to the Rockaways in 1956.

The northern end of the line above Liberty Avenue remained in service until 1962, when declining patronage convinced the LIRR to close it down.

The right of way of the old line has remained surprisingly intact over the years, and in some places, tracks and overpasses are still in place. This has given some transit visionaries the idea to reactivate it as a one-seat ride to JFK Airport, but since it now runs through a residential neighborhood, it’s unlikely that the locals will allow that to happen.

The branch of the LIRR we walked on was constructed in 1908-09 and connected the LIRR with the Rockaway Peninsula. It diverged from the main line at a point just east of the 63rd Drive overpass known as the Whitepot Underjump. The branch point wasn’t called a ‘junction’ because northbound trains passed into a short tunnel under the main line and then merged. All of the Rockaway Branch featured state of the art appointments, which meant no grade crossings, electrification and signals. Most of the branch was on an embankment or elevated over main streets.

The Rockaway Branch featured stations at Grand Street (now Grand Avenue), Rego Park (which were on the Main Line but were stops only for Rockaway Branch trains), Parkside, Brooklyn Manor, Woodhaven [Junction], Ozone Park, Aqueduct, Howard Beach, Hamilton Beach, Goose Creek, The Raunt, Broad Channel, and the myriad stations on the peninsula. Many of the stations were of wooden construction, and no trace of them remains today except a widening of the space between trackways. Two stations made of concrete, Woodhaven and Ozone Park, are still there. In 1956, Aqueduct, Howard Beach, Broad Channel and the peninsula stations were taken over by the TA as subway stations. 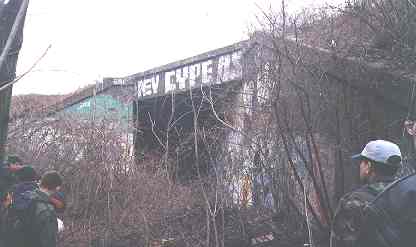 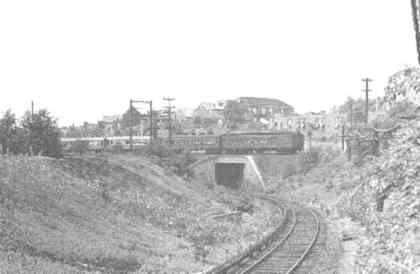 The Whitepot Underjump, at present (above) and in its 1950s heyday (below) 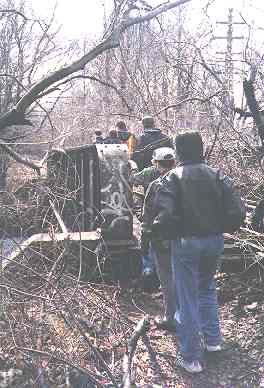 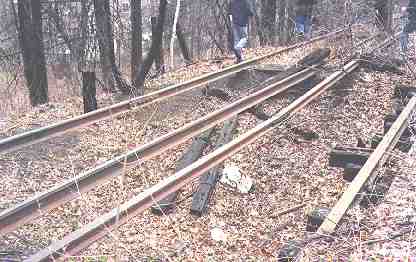 On occasion the roadbed is washed out, leaving only the tracks in place. 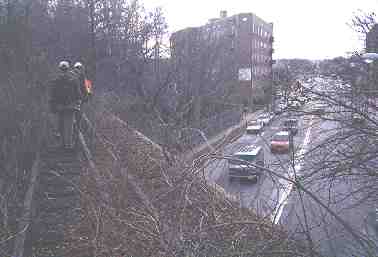 The Yellowstone Boulevard Bridge is a treacherous crossing because not only is it overgrown, there’s no clearance on either side, so a trip can send you into an eleven-foot drop into traffic. 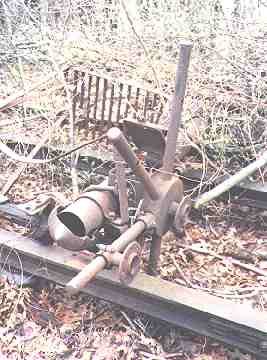 We found several signals and other implements on the trackbed, including this position light signal with the lights removed. 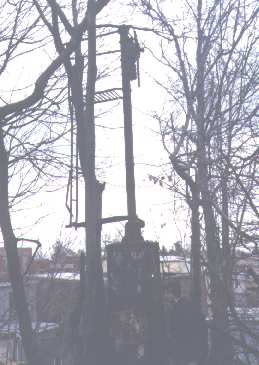 Signals are occasionally still standing though in a heavy state of rust. 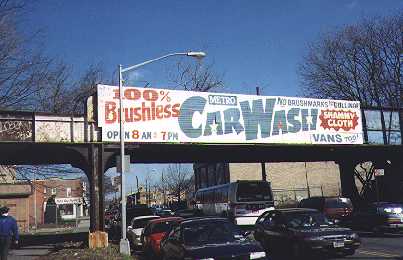 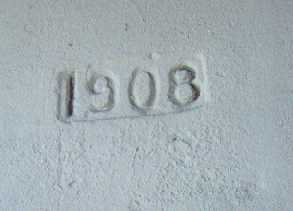 The Rock trestles over Metropolitan Avenue where the date of construction is apparent. 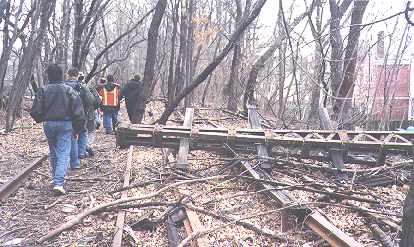 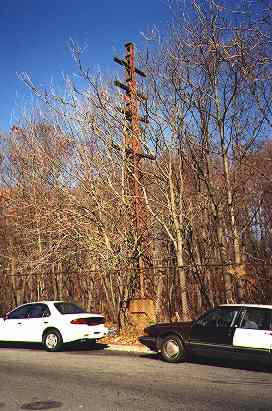 Utility poles and dead trees block the route now and again, but more often than not, the wire towers are still standing. 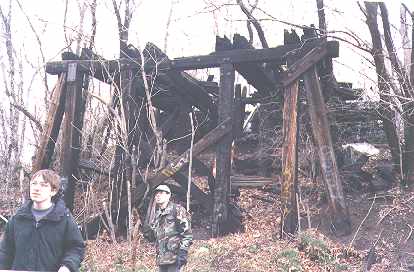 The Rock passed over the Montauk LIRR branch on a wooden trestle that collapsed decades ago. The two lines connected via a flying junction at the Glendale Junction, which ceased operations in 1946. Till then, the Montauk Branch was electrified from Glendale to Fresh Pond, but the third rail was deactivated after that, which is why it’s safe to cross those tracks now, as long as a train isn’t coming. 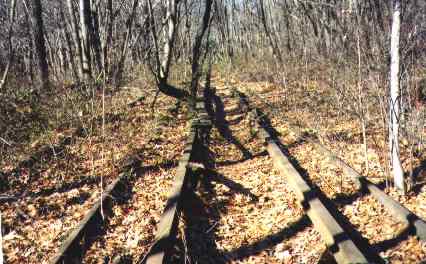 Abandoned trackage along the Rockaway Branch near Myrtle Avenue in Glendale. 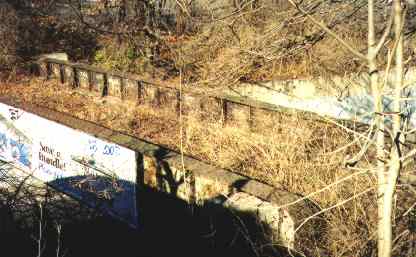 Bridge that carried the Rockaway Branch over Union Turnpike in Glendale is rusted and overgrown with weeds. 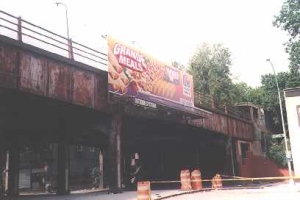 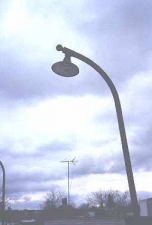 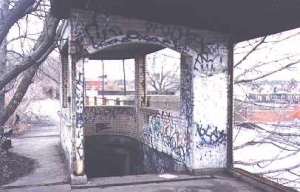 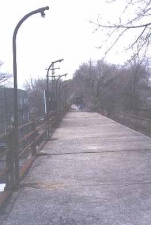 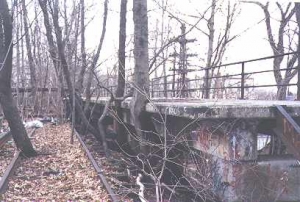 A view of Woodhaven Junction in 1950 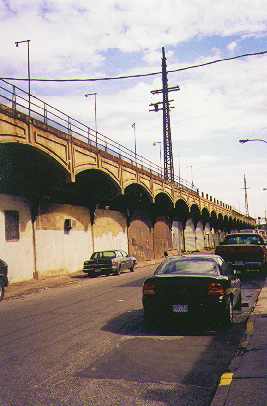 Ozone Park station was set up to enable passengers from Pennsylvania Station and Flatbush Avenue to reach the Rockaway Park area or Far Rockaway section simply by changing trains (“Change At Ozone Park!”) At certain times, the trains would stack end-to-end, and passengers would transfer back and forth on the platform. Of course, operation in the reverse direction also occurred. Due to street restrictions below, which limited the right-of-way width above, platforms were on the outside of the four track right-of-way, making an across-the-platform exchange impossible. To accommodate this, the platforms were made exceptionally long, so that non-rush hour length MU trains could stack end-to-end and allow passengers to transfer. A set of crossovers from the outside tracks to the inner tracks were at the east end of the station, to permit trains stopping at Ozone Park to run express after the station stop, or to perform the reverse move.

2011: there’s a notion to reactivate the branch, which would mean a complete rebuild. Good luck with that.

Line start in Rego Park Not Middle Village. There is another branch that runs from Long Island City that cuts through the South Side of Middle Village on the Way to Jamaica.

From what I’ve read, Woodhaven Junction was opened in the mid-189o’s rebuilt in 1942, and closed on the Rockaway Beach Branch in 1962, and the Atlantic Branch in 1976:
http://www.trainsarefun.com/lirrphotos/lirrstationshistory.htm

Additionally, there was another Woodhaven Station separate from the junction on the Atlantic Branch until 1939, when that line was buried underground.

The FHYAA in Rego Park as removed sections of track and become a squatter where it used run. Or did they acquire the additional space?

[…] get a better sense of what it looks like, check out the photos on Untapped New York, Abandoned NYC, Forgotten New York, and […]

Bring the LIRR back to the Rockaway’s. We have no A train and are in need of other transportation off and on the Island. The MTA is too slow and late. We need reliable transportation with on time up to the minute schedules.

Totally agree have NO idea why this is taking so long to get done, especially when it’s needed now with the A train being out of service.

Whitepot Junction is behind the FH Little League and is named for the original name of Forest Hills, Whitepot. The Parkside Station was at Metropolitan Avenue, where the Car Wash and new Metropolitan High School is located.

As for the “Washouts” that you identified in pictures. Those are not washouts. Why would dirt just wash out from the middle of tracks and there is no outlet to show where it went? In the 1970s and early 80s, local Forest Hills, Rego Park (the line bisects the communities btwn FH Little League and Metropolitan Ave, as well as kids from Glendale would hang up on the tracks and do what they did in school yards except without police harassment. Club houses were built into the old LIRR berm. Wooden 3rd rail covers were cut off and braced against/attached to RR ties to make “shacks” to hangout in. Everything was used in these shacks including car seats from abandoned and stolen cars, 55 gallon drums to burn branches and leaves to keep warm and anything else handy. These shacks were semi-subterranean. Some were completely below ground and covered. This “Washout” you indentify is actually the remains of one of these shacks. Some were even tree houses. Most got destroyed by rival shacks or kids from further up the line, usually by arson. By the car wash there was a shack where a man slept at night who worked the wash during the day. One night during the winter around 1980, he died in a fire of a shack. I think his name was Stanley. After that, shacks slowly died out. To this day its not known if the fire was set or he just fell asleep and the fire that kept him warm caused his own death.

The fire which destroyed the LIRR trestle across Jamaica Bay occurred in May 1950, not 1953 as stated in your article. The LIRR attempted to keep some service to the Rockaways operative via Five Towns and Far Rockaway, but it wasn’t successful. The NYC Metro began service in 1956 on a new concrete and washed sand structure.

Now, news of a GREENWAY like the HighLine in NYC

“In the early days of the IND subway line, there was a plan to attach the LIRR Rockaway Beach Branch line to the IND subway. However, the Depression forced the IND to shelve that plan…but not before installing signage in some of its stations pointing to a Rockaway connection that was never built!”

Are there any pictures of these signs? Do they exist today in any stations?

They were covered up…

Too bad – In which IND stations were they posted?

There are pictures of the signage here on FNY.

One day I love to see the route turned into a walking path,much like the High Line in Manhattan.For bikes and walking to preserve the history of the Queens neighborhoods .

We are working on it Dewan: http://www.thequeensway.org

That whole corridor needs subway service, and an expansion of the 60-minute transit commute bubble a lot more than it needs an expensive park running down the middle of a massive park that we already don’t do enough to take care of.

If including a park, dig it out with box tunnels below for a railway and perhaps even a motorway, with the surface for a linear park. There’s much that can be doe with box tunnels

As a teenager (circa 1940) I lived right near the 101st Ave. Ozone Park station of the LIRR that went all the way out to Rockaway Beach. What a wonderful ride, with the train packed with happy, laughing young people loaded down with towels, thermoses, suntan lotion (or baby oil with iodine) and sandwiches, etc. The windows were always wide open to catch the breezes because of course there was no air conditioning. This was right before the war, and it was unknown which of the young men happily headed for the beach would never return, or come back with life-altering wounds or disabilities. Years later, when I heard the line would be no more, I was crestfallen. It seemed to go hand-in-hand with the loss of youth and innocence caused by the war.

Let’s hope all these memories will be preserved in the future as part of the LIRR’s Rockaway Branch history.